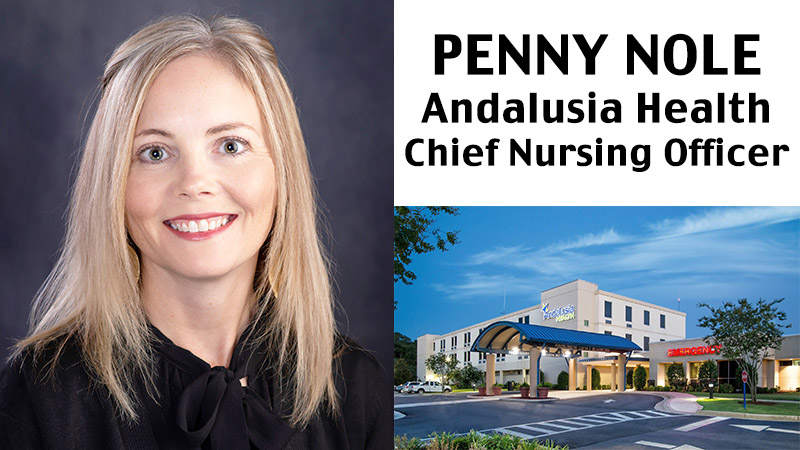 Penny Nole relocated to Andalusia from Kentucky with her husband David Nole and their four children. She is now the chief nursing officer for Andalusia Health.

Penny Nole was welcomed with open arms by the hospital staff when she accepted a position as the Chief Nursing Officer at Andalusia Health.

“I have worked in multiple areas of nursing where I started as a student nurse, telemetry, and CCU nurse. I served as a director of med/surg, CCU/ICU, telemetry, dialysis, and transitional care units. I also promoted quality as a sepsis and stroke coordinator. I served as the director of patient care services at a critical access hospital and most recently worked in Texas as an assistant chief nursing officer in the LifePoint ACNO program,” she said.

Originally from Bowling Green, Kentucky, Nole moved to Paris, Texas, for a year in the LifePoint Assistant Chief Nursing Officer program. She is an alumna of 1994 Western Kentucky University with an associate degree in nursing and a master’s degree in nursing administration.

Prior to her arrival in Andalusia, she was a student nurse extender at Greenview Hospital in Bowling Green in 1993 and worked there for 25 years. Afterward, she transitioned to a critical access hospital and then LifePoint, where she became aware of the open position at Andalusia Health.

Nole’s first day working at Andalusia Health was Feb. 7, 2022. “My priority is to the patient and community. Providing quality compassionate care to those we serve is my focus. Scion Health promotes making communities healthier and healthcare members providing a leadership role in the community. For these reasons, I am glad to be part of Andalusia Health and happy to serve our community.”

Since moving to Andalusia, she has enjoyed the area for its small-town Southern charm.

“I love the hospitality. People are genuinely friendly and care deeply about their community. I have felt very welcome. I also like the cleanliness of the community and the pride that is shown throughout. I am excited about the opportunities that Andalusia provides and thrilled to be contributing to making a difference for the health and wellness of those in our community,” Nole said.

She is married to her husband David Nole of nearly 30 years with four children: Emily, Nathan, Abby, and Ellie. The couple also has two dogs and a guinea pig.

“We would like the community to get to know her and love her as we do. She’s very sweet and very committed to running Andalusia as efficiently as possible with her extensive experience. She fits in our team well and has great ideas. We could see the change in atmosphere since her being here already, and that’s saying a lot since I literally just started in December,” said Andalusia Health Marketing Coordinator Yvonne Sowell.