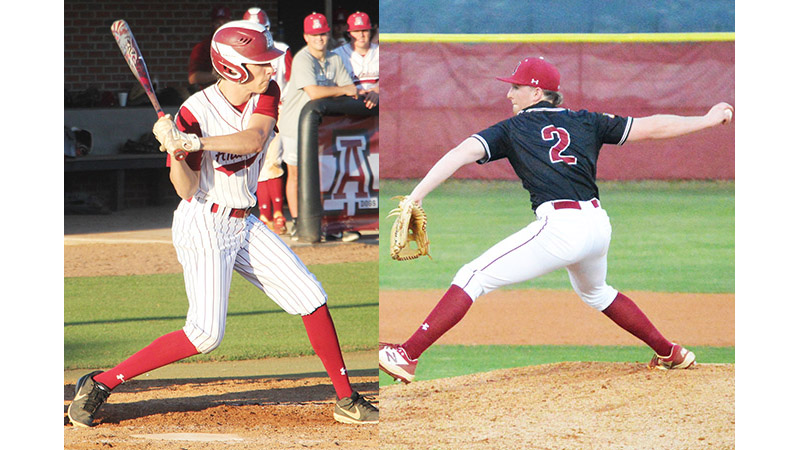 LEFT: Connor Dalton had four hits on the day for the Bulldogs. RIGHT: Tucker Glenn threw seven innings and picked up the win for Andalusia in game one of the doubleheader.

Andalusia walked off for a 5-4 win and then routed Sweet Water 15-2 in five innings for a varsity baseball doubleheader sweep Friday, March 25.

“We had a very undeserving win in game 1. We were fortunate to have a great pitching performance by Tucker Glenn and a senior Ayden Amis who picked us up in the last inning. That inning was led off by a great at-bat by Connor Dalton. We hit the ball very well and had another great pitching performance by Paulk Smith in game 2. The defense wasn’t very good, but we were extremely happy to win two games,” said Head Coach Tyler Dent.

Game 1: Andalusia 5, Sweet Water 4
Trace Luker had a one-out double in the first, and Walker Thompson followed suit and gave SWHS (9-13) an early 1-0 lead. Glenn retired the next two batters on groundouts. Conner Brooks walked on four straight pitches and stole second but was unable to score. David Etheridge began the second with a single and made it to third, but Glenn got out of the inning unscathed. AHS (7-8) used a two-out rally in the bottom half. Garrett Blackston singled before Glenn reached on an error. Jack Day walked and loaded the bases with one out. Following a fielder’s choice, Glenn scored the tying run on a wild pitch. After a walk to Amis, Day scored on another wild pitch for a 2-1 lead after two innings.

Payton Averette evened the score with an RBI single up the middle in the top of the third. Andalusia was retired in order on just eight pitches in its half. John Singleton opened the fourth with a single but was caught stealing second. Glenn held Sweet Water off the board, but the host Bulldogs went 1-2-3 and kept the game tied at 2-2 after four innings. The visiting Bulldogs took advantage of two miscues in the fifth and scored a pair of unearned runs. Michael Cole doubled home Luker before Thompson scored on a passed ball and made it 4-2. Dalton and Amis had back-to-back singles in the bottom of the frame. Joseph Turner loaded the bases with a one-out single as Parker Adams earned an RBI on a fielder’s choice. Dalton scored and trimmed the deficit to 4-3. 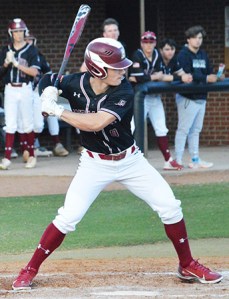 Parker Adams cut Sweet Water’s lead to one run with an RBI in the fifth inning of the first game.

Both teams went scoreless in the sixth. Cole doubled to center in the top of the seventh, and Averette followed with a one-out walk. Cole was thrown out attempting to steal third, and Glenn turned away SWHS with another scoreless inning. Dalton started the bottom half with a single for AHS. Amis then hit a two-run blast to center for the game-winner.

Amis went 2-for-3 at the plate with a run scored and two RBIs. Dalton also went 2-for-3 and scored two runs. Turner and Blackston both finished 1-for-3. Glenn was the winning pitcher and allowed four runs (two earned) on eight hits in seven innings while striking out five.

Game 2: Andalusia 15, Sweet Water 2
Smith worked around a one-out single from Luker in the first and held Sweet Water scoreless. Parker Adams gave Andalusia a 1-0 lead with an RBI single to score Amis. Glenn and Jack Lathrop stretched the margin to 3-0 with consecutive two-out singles. After an error, Dylan Jackson scored on an RBI double from Dalton for a 6-0 lead after one.

The visiting Bulldogs put runners at the corners, but Smith eluded further damage. Jackson pushed the lead to 8-0 with a two-run double and drove home Blackston and Glenn. Dalton ripped a single up the middle and cashed in Lathrop and Jackson. Turner brought in Amis and Brooks with a single as the host Bulldogs took a 12-0 lead with two innings in the books. SWHS tallied its first run on an error in the third when Young scored. Following a one-out walk to Tycamren Jackson, Glenn delivered an RBI double to right and gave AHS a 13-1 lead after three.

Townsend scored on a miscue in the top of the fourth. Turner lined an RBI single to right and brought home Noah Whiddon. Adams scored Brooks on a sacrifice fly and made the score 15-2. Etheridge reached on a two-out error and kept the game alive in the fifth before a groundout ended the contest early. 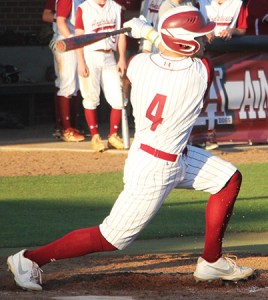 Joseph Turner finished the second game with three hits and totaled four on the day.

Glenn went 3-for-3 with two runs and two RBIs, and Dalton was 2-for-2 with three RBIs to pace Andalusia at the plate. Turner was 3-for-4 with a run and two RBIs as Brooks went 2-for-4 with two runs. Smith earned the win with a complete-game effort and allowed two unearned runs on two hits while striking out two.

Andalusia hosts Eufaula for a doubleheader Monday, March 28 at noon and welcomes Saint James for a single game Tuesday, March 29 at 4:30 p.m.