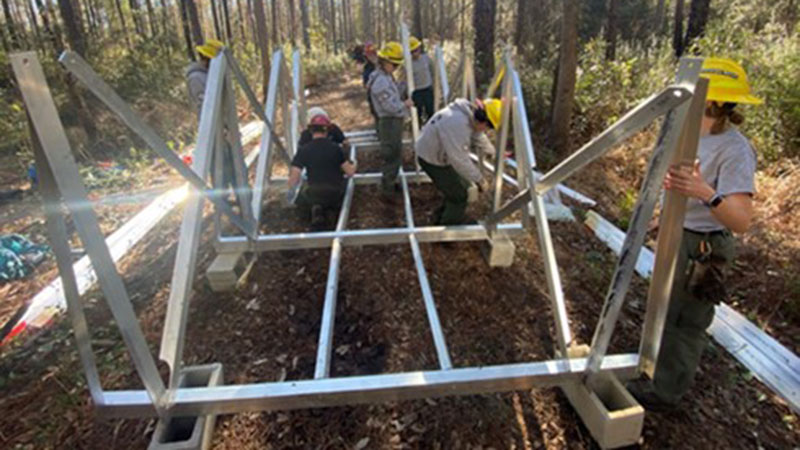 Over the past seven months, the 8 person Delta 2 crew has traveled the Southern Region and completed work on national forests in Alabama, California, North Carolina, and Mississippi.

The members supported the Forests in accomplishing approximately 10,780 acres of prescribed burns and 434 acres of habitat restoration.  Other project work Delta 2 crew supported was in wildlife management, trail maintenance, and recreation site maintenance and improvements. 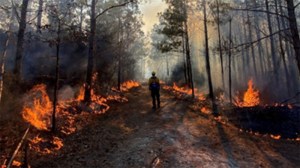 “The Conecuh Ranger District was happy to host the NCCC crew who helped us with several projects on the district to include prescribed fire, wildlife and trails work,” said Anthony Jay Edwards, district ranger of the Conecuh National Forest.  “Their greatest contribution is the energy and enthusiasm that they bring to the staff.  It is refreshing and heartwarming to see the wonder in their eyes for the things we get to experience daily.”

“I have solidified skills in developing fire lines for prescribed burns, assisted in trail upkeep through maintenance, and was officially certified as an A-level chainsaw sawyer. I cannot wait to see where this program takes me in the future deployments, and what new life goals I will strive to achieve when my program ends,” said NCCC crew member Cayden Fairman

“This crew was very instrumental in the progress of our trail bridge replacement project. Every member worked hard and was eager to learn. They were very respectful and a joy to work with,” said Randy Barefoot, National Forests in Alabama Forest Service employee.

The Delta 2 Crew and their accomplishments are a direct result of the partnership between the Southern Region of the USDA Forest Service and AmeriCorps NCCC. The partnership supports added capacity for Forests to meet or exceed annual targets by providing three traveling crews for the Southern Region annually.  This collaboration also focuses on providing AmeriCorps participants with conservation project experience and workforce development by investing in the future stewards of public lands. Every member of the previous year’s crew that has applied for Forest Service positions has been successfully placed.