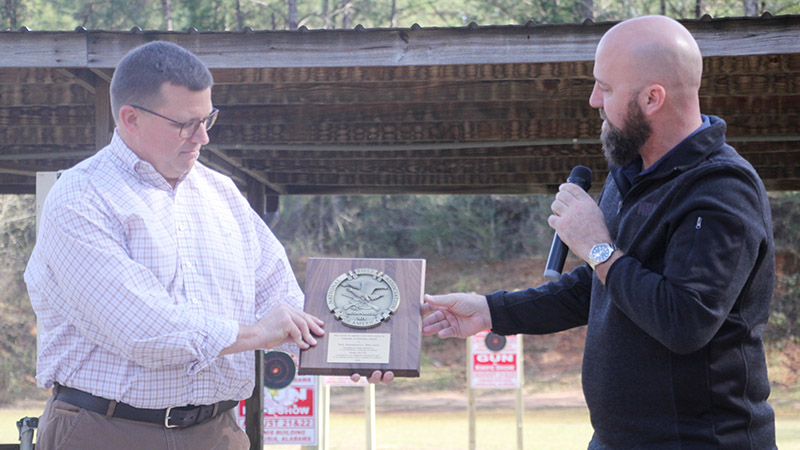 Alabama Rep. Mike Jones, left, is presented with the NRA-ILA’s Defender of Freedom Award by Art Thomm at the South Alabama Gun Club on Thursday, March 24.

In a presentation held the South Alabama Gun Club near River Falls, Jones was given the award, which was described as the highest honor the NRA-ILA bestows to legislators. The award was presented in “recognition of his tireless efforts to defend liberty and protect the interests of law-abiding gun owners and sportsmen in Alabama,” according to a statement about the award.

“Rep. Jones was absolutely critical in the passage of House Bill 272, Alabama’s Constitutional Carry gun law. There was a portion of the session we didn’t think it was going to make it through. We had a heck of a fight from opponents of this bill. [Jones] was able to grab the situation and steer in the right direction. Since first elected in 2010, Mike Jones has shown that he is an absolute supporter and friend to law-abiding gun owners in Alabama,” Thomm said.

HB 272 — also known as the constitutional carry bill — allows for the carrying of a concealed firearm without a permit. Gun rights advocates pushed for the bill citing that permit requirements are an infringement on the Second Amendment. The bill was signed into law by Gov. Kay Ivey on March 10.

Along with his work on HB 272, the NRA said in a statement that Jones has supported the Second Amendment throughout his terms in office.

“Jones has been a strong and steady advocate for the cherished Second Amendment rights of not just the citizens of his district, but of all Alabamians. A member of the National Rifle Association, Representative Jones has worked tirelessly to be a voice for firearms owners. Since first elected in 2010, Jones has taken the lead to preserve and protect the rights of law-abiding firearms owners with his sponsorship of several bills, including the 2014 constitutional amendment which enshrined that every Alabama citizen ‘has a fundamental right to bear arms and that any restriction on this right would be subject to strict scrutiny,” the statement said.

“When you are in the trenches there are some people who stay close to you. The NRA has stayed close throughout the process [involving HB 272],” Jones said. “I met with everybody. The door to my office in Montgomery is never closed. I try to get input from everybody involved and that is how we approached this bill.

“This was no easy bill. It was a hard lift. You would think in Alabama it would have been easier and a lot of that had to do with misinformation. At the end of the day, it was simple; it is about law-abiding gun owners being able to carry your gun, defend yourself and defend your families. It is really that simple.”

Rep. Jones has earned an “A+” rating from NRA-PVF.  As a recipient of the NRA-ILA Defender of Freedom Award, Representative Jones joins an esteemed list of individuals who have gone “above and beyond” in the fight to defend the Second Amendment.