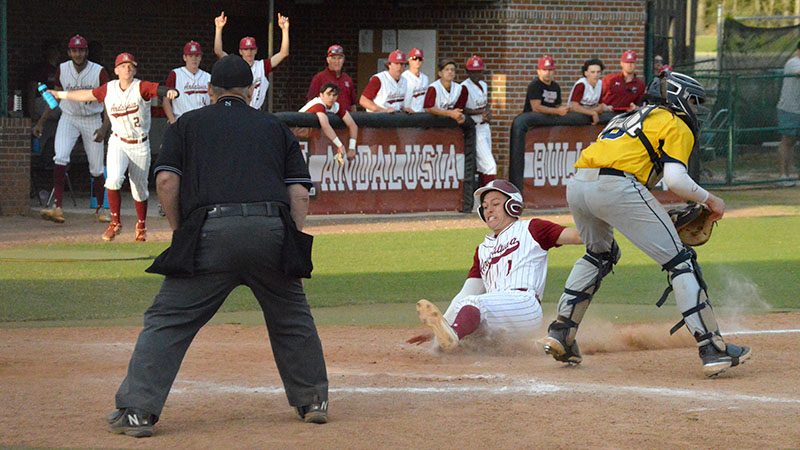 Facing a one-run deficit with three outs to go, Andalusia stunned Saint James in thrilling fashion and won a classic from start to finish, 5-4, in varsity baseball action Tuesday. 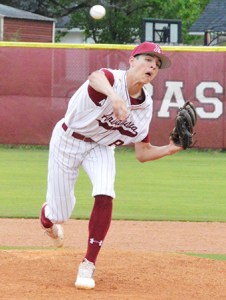 Jack Lathrop earned the win for Andalusia with 1 2/3 shutout innings in his varsity debut on the mound.

“I told Aksh when I pulled him, it was not great but better than last time against Greenville. Our hitters did a good job at the plate and gave us a chance to win, as did the defense. Saint James has a really, really good ball team and threw some good left-handed arms at us. We did a good job with those guys. Jack Lathrop is a sophomore and has been playing on our JV this season. For him to come in and do that in his first varsity outing says a lot about him and how he has matured. I’m really proud of Jack and those guys in the last inning who put those at-bats together and gave us a chance to win,” Head Coach Tyler Dent said. 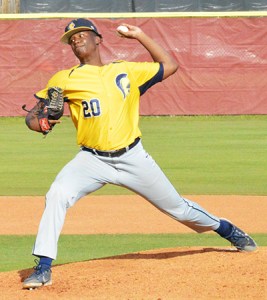 K.J. Jackson began the game on the mound for Saint James and took a no-decision after throwing three shutout innings.

Shaun Bridges led off the top of the first with a single. Foster Rasmussen and Carter Carroll walked and loaded the bases with two outs. Aksh Patel held the Trojans (14-5) off the board as K.J. Jackson grounded out to first. The Bulldogs (9-9) went in order in the bottom half. Michael Winn began the second with a single to left and moved into scoring position on a groundout. STJ took a 1-0 lead with a two-out RBI single up the middle by Bridges and scored Winn. Joseph Turner caught Bridges stealing second and ended the threat. Parker Adams led off the home half with a single and took second when Garrett Blackston laid down a sacrifice bunt. Tucker Glenn walked before Jackson induced an inning-ending double play.

Beard singled and swiped second in the third. Patel picked up the next two outs before Carroll stroked an RBI single up the middle and doubled the lead to 2-0. Ayden Amis doubled with two away but was tagged out between second and third. Saint James received a single by Adam Garnett, but that was all as a line out capped the top of the fourth. Andalusia got on the board in the bottom half. Turner singled, stole two bases, and scored on an errant throw, which cut the deficit to 2-1. Clint Shores rallied back and preserved the lead with a strikeout. 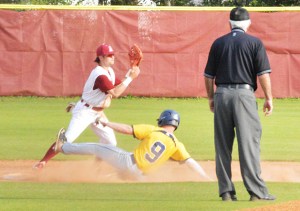 Conner Brooks catches the ball for the Bulldogs during a force play to get Adam Garnett of the Trojans out.

The Trojans earned the run right back in the top of the fifth. Beard reached on a leadoff walk and scored on a groundout for a 3-1 lead. The Bulldogs put together a rally of their own with three straight one-out hits from Jack Day, Connor Dalton, and Amis. Conner Brooks plated Day with an RBI ground out to third. Shores earned a crucial strikeout and stranded two runners in scoring position as the score remained 3-2 after five innings. 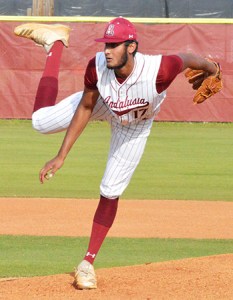 Aksh Patel started the game on the mound and threw 5 1/3 innings for Andalusia.

Clint Houser singled up the middle with one out and reached third on a pair of stolen bases in the sixth. Following a walk, Jack Lathrop took over on the mound. Beard singled to right and gave STJ a 4-2 lead. Dalton followed with a huge throw to third base from right field and nabbed Bridges. Adams and Blackston each singled, setting up runners at the corners with no outs. Jake Coon sacrificed both runners up 90 feet, and Dylan Jackson drove in Adams on a groundout. Shores caught Day looking for out number three as AHS trailed 4-3 with six innings in the books. 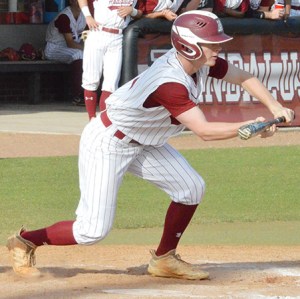 Garrett Blackston executes a sacrifice bunt to move a runner into scoring position.

Lathrop struck out Carroll on three pitches and retired Jackson on a pop-up in foul territory. Winn kept the top of the seventh going and reached on an error, but Garnett grounded out to second and set the stage for a photo finish. Dalton reached on an error as Cooper Wright took the hill and walked Amis. Two batters later, Turner legged out an infield single and loaded the bases. Adams earned a full-count walk and forced a 4-4 tie. Blackston worked the count to 2-0 and lifted a sacrifice fly to center. Houser fired a strike to the plate, but Amis beat the throw and scored the game-winner. 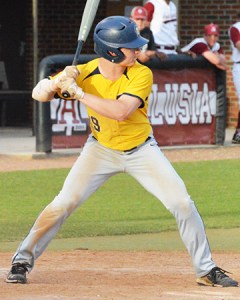 Adam Garnett remains focused at the plate during an at-bat.

Amis and Adams both went 2-for-3 with a run and paced Andalusia at the plate. Turner finished 2-for-4 with a run and an RBI, while Blackston went 1-for-1 with an RBI. Day and Dalton both scored a run and ended the game 1-for-3. Patel threw 5 1/3 innings and allowed four runs on eight hits while walking four and striking out two. Lathrop earned the win and allowed only two hits with a walk and strikeout in 1 2/3 innings of relief.

The Trojans’ Carter Carroll, left, attempts to catch the ball as the Bulldogs’ Joseph Turner, right, prepares to slide safely into third base.

Andalusia returns to the field Tuesday, April 5 with a 4:30 rivalry matchup at Straughn. “We will take four or five days off for Spring Break and come back next week. We have a game on Tuesday and a big area series with Charles Henderson at the end of the week,” Dent said.