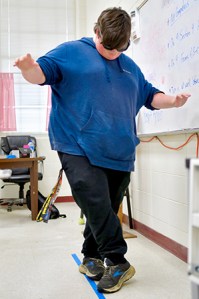 An AHS student learns how drugs and alcohol can affect balance and judgment.

The day began with high school students attending an opening assembly in the auditorium.

Students watched a short video produced by the Peer Helpers and Skip Enzor of Can’tSkipThis. The video opens with the question, “What if you knew…What would you do?” and depicts normal, everyday students in the halls of AHS with labels that give insight into what is really going on in their lives. Peer Helper Vice-President Ashland Kelley explained to students that everyone has something going on under the surface and that we are all best served if we will just follow the advice of Megan Kelley (Class of 2014): “Be kind to everyone because you never know what they’re going through.”

Edward Taylor served as the keynote speaker. Taylor looks like a regular guy: he grew up in a regular household, had regular high school and college experiences, and with the exception of becoming a heroin addict, he is a regular guy. 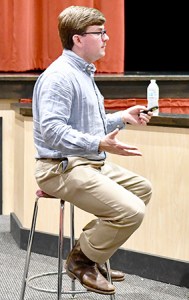 Edward Taylor, director of prevention initiatives at Addiction Prevention Coalition, speaks to students about his own personal experience with drug addiction.

Taylor explained that he began “self-medicating” as early as 12 years old and toyed with alcohol and drug use throughout high school as a means of fitting in and coping with personal issues. Early use of marijuana led to opioids and eventually heroin use. He only got sober after being convicted of robbing two pharmacies in search of more drugs.

He now works for Addiction Prevention Coalition as the Director of Prevention Initiatives and tells his story in hopes that young people will understand that addiction is not something that just happens to “other people.” It can happen to anyone.

Junior Halle Edenfield says, “I never expected for him [Taylor] to say he was a heroin addict and a convicted felon. He looks like someone I would see at church.”

After lunch, the junior high students followed an abbreviated schedule that included the keynote speaker, the FOCUS Zone, and three, twenty-minute breakout sessions including topics of anti-bullying, dangers of vaping and underage drinking, See Something-Say Something, and social media. They ended the day with the PRIDE Survey, sponsored by Drug-Free Andalusia.