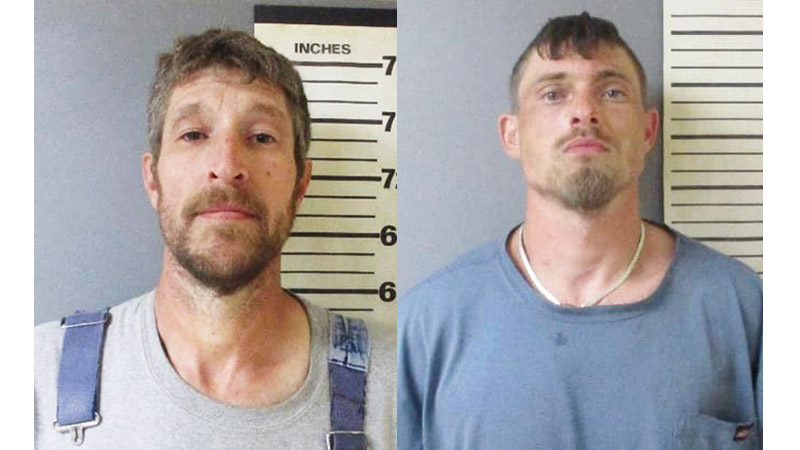 A search is underway for two burglary suspects, who led police beginning in the Loango community up to the Conecuh County line. LEFT: James Gunn RIGHT: Terry Etheridge

An all-night hunt led to the arrest of two burglary suspects.

According to the Covington County Sheriff’s Office, a search for the suspects began around dusk on Tuesday. The K-9 tracking team led deputies on a long-distance trek beginning in the Loango community up to the Conecuh County line.

Sheriff Blake Turman said the search for the suspects was the result of an ongoing investigation and surveillance.

“Over the past several months, the Criminal Investigations Division has conducted surveillance on several target areas. Utilizing investigative techniques, investigators learned that a group of subjects were targeting hunting camps and isolated rural property. While tracking activities, investigators knew when a burglary was in progress and a perimeter was quickly established to contain the suspects,” Turman said.

Those efforts led to the arrest of two individuals. James Gunn was apprehended a short distance from the scene at approximately 10:15 p.m. while a second suspect, Terry Etheridge, fled on foot. Etheridge was located approximately 5 miles from the scene the officials said he attempted to sneak past perimeter units in a friend’s vehicle. He was arrested at 3:13 a.m. without further incident.

Turman said both suspects attempted to conceal their identity with the use of camouflage, masks and gloves.

Etheridge is charged with two counts of third-degree burglary, one count of criminal mischief and on county of tampering with evidence. Total bond for all the charges is $130,000.

Turman said additional charges against the suspects are expected as the case remains under investigation.

“Rural areas that are not checked on frequently can become targets for this type of crime,” Turman said. “I urge you to check your property regularly and look out for your neighbors. Take photos of your property for your record. Photograph everything to include old farm equipment. One of the challenges for law enforcement is to identify stolen property that was sold or scraped. With inflation and world events, scrap prices are at a high point. Fuel costs are not helping either. Keep farm fuels under close check. The criminal element will steal anything to make quick money. We’re in tough times and shouldn’t take anything for granted.”

The CCSO expressed its appreciation to those who assisted in the investigation and search.

“Special thanks to all of our units for staying active during the search, and to Eddie Rowell for his assistance with his FLEER and drone. Also, thanks to the Andalusia Police Department for assisting with other calls so our units could stay in the search,” Turman said.