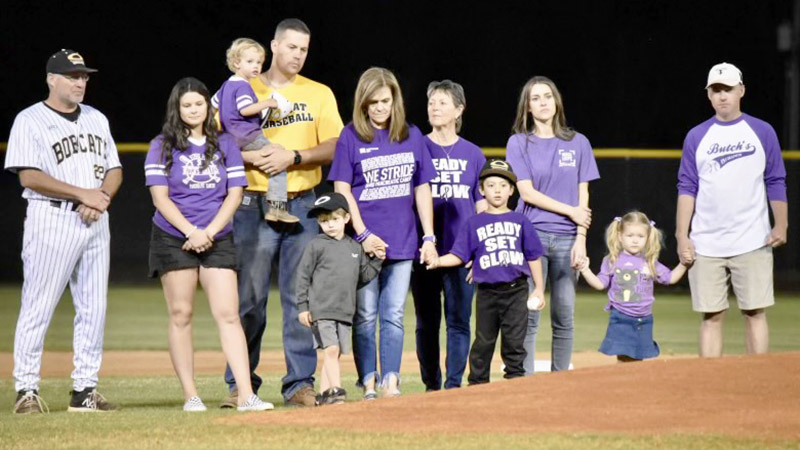 The family of Butch Youmans was recognized prior to one of Opp’s games in the tournament that bears his name. (SUBMITTED PHOTO)

Youmans passed away on May 25, 2014, after an 18-month long battle against pancreatic cancer. Each team was guaranteed to play three games. Teams in the 2022 field were Opp, New Brockton, Straughn, Providence Christian, Eufaula, Luverne, W.S. Neal, Clarke County, Geneva, Greenville, and Kinston. 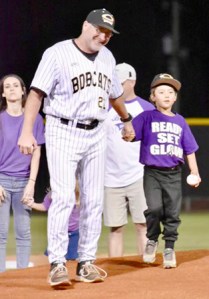 “We are so fortunate to continue this tournament in Mr. Butch’s memory. Mr. Youmans meant so much to Opp for not only baseball but also for the school’s other sports and athletics. He worked with so many of our kids, whether he was coaching, umpiring, or showing them how to play the game of baseball. He exemplified sacrifice by spending time away from his family to help the kids in Opp be better baseball players and young men,” said Head Coach Michael Cassady.

While he was at HT Hackney, Youmans donated drinks, food, and snacks to the baseball and softball programs.

“Mr. Youmans’ hard work and dedication to the kids in Opp is why we name this tournament after him. I would like to personally thank Spencer and Savannah Youmans and his family, Savannah and Adam Jones, and her family, Renee Anderson, and Donna Youmans for their contributions to this tournament over the last eight years. We are honored again to play this tournament for Mr. Butch,” Cassady added.

Opp shut out Kinston in the championship game, 17-0, Tuesday as the Bobcats won the title for the first time in six years.