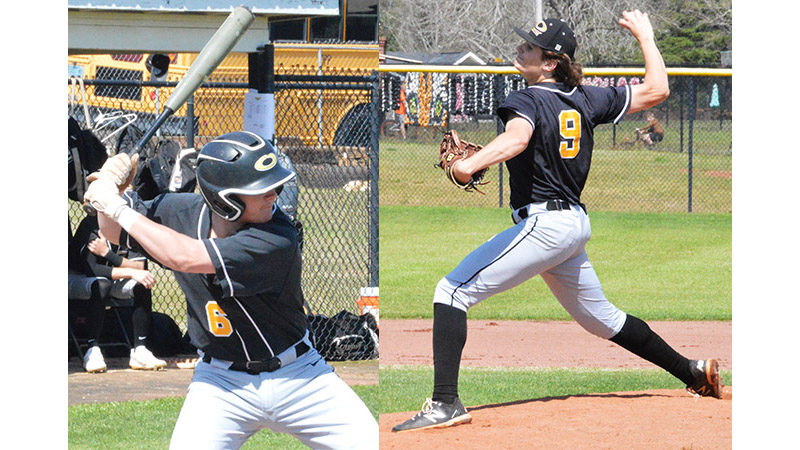 Opp won the Butch Youmans Spring Break Tournament championship over Kinston on Tuesday. LEFT: Ethan Cox finished the day with four hits for the Bobcats. RIGHT: Walt Spurlin earned the win for Opp in game one against Eufaula with a complete game. (FILE PHOTOS)

Opp picked up its 14th straight win and won twice to win the Butch Youmans Spring Break Tournament for the first time in six years Tuesday.

“Our tournament was once again a huge success. Thank you to everyone involved for making it one of the best ones yet. Thank you to the 12 teams that participated this year. I appreciate Spencer and Renee Anderson and Ms. Donna Youmans for allowing me to put this tournament on for Mr. Butch. I know he was watching this tournament go on and proud of Opp. We finished 3-0 and won first place. The Geneva Panthers were 2-1 and were the runner-up,” said Head Coach Michael Cassady.

Game 1: Opp 8, Eufaula 4
The Bobcats (16-4) overcame an early four-run deficit and battled back for an 8-4 win in the first game of the day. Opp scored five runs in the bottom of the first and added the final three runs in the fifth.

Walt Spurlin earned the win with a complete-game effort and allowed four unearned runs on nine hits and struck out nine.

Game 2: Opp 17, Kinston 0
OHS took an early lead and did not relinquish it for a 17-0 mercy-rule win over Kinston in the championship game late Tuesday night.

Tanner Hall picked up the win with a complete-game one-hit shutout and struck out 11 Bulldogs.

Opp hosts Zion Chapel next time out on Monday, April 4 beginning at 4:30 p.m.