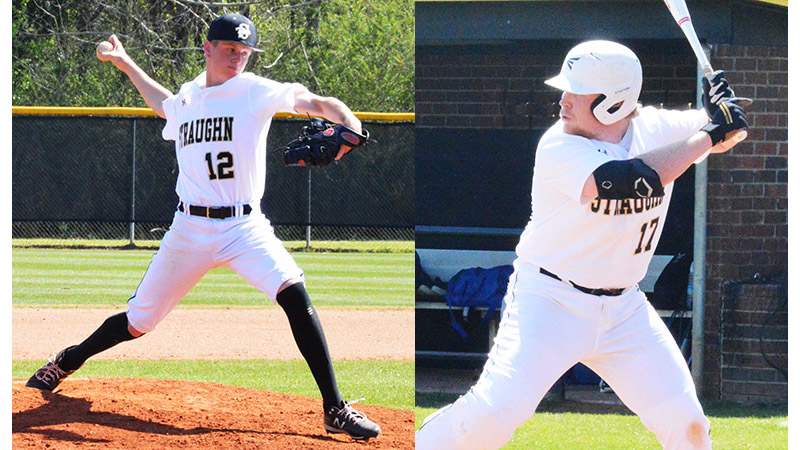 Straughn closed out the final day of the Butch Youmans Tournament in Opp with a win over New Brockton and a loss to Eufaula. LEFT: Saxby Radford throws a strike to the plate. RIGHT: Cal Ashberry focuses intently on the next pitch during an at-bat for the Tigers. (FILE PHOTOS)

Straughn wrapped up the second day of the Butch Youmans Spring Break Tournament in Opp with a split against New Brockton and Eufaula on Tuesday.

“I thought we played really well the first game against New Brockton. We faced a really good pitcher, and I thought we swung the bat the best we have all season. Against Eufaula, we didn’t play as clean in the field. They had a really good team, and anytime you play a team like that, you can’t afford to give away runs. Overall, I was proud of our guys and the way they competed. We still have a lot of work to do, but I’m excited about the last half of the season with this group,” Head Coach Andrew Lowery said.

The Tigers (6-8) held a five-run lead in the third inning and pushed across six late runs for a 12-4 win in the first game. Drew Cashin hit Abram Guilford with a pitch before Saxby Radford singled. Zayd Rogers then loaded the bases on a walk, and Eli Guilford drove home Abram Guilford on a groundout. Cal Ashberry walked and doubled the lead to 2-0. Colton McClenny plated Hayden Pope with an RBI double and pulled the Gamecocks (9-10) closer. The score remained 2-1 after an inning when Ashberry struck out Gabe Herrington and Brayson Carr.

Riley Brooks reached on an error in the second and moved to third on a sacrifice bunt by Taylor Sikes. Abram Guilford brought Brooks to the plate with a sacrifice fly to center. Ashberry worked a 1-2-3 bottom half as the score stood at 3-1 with two innings complete. Courtesy runner Cody Lowe added the fourth run in the top of the third. Samuel Hammett and Brooks followed with back-to-back RBI doubles and opened up a 6-1 lead for SHS. Cashin singled to left for NBHS but was stranded when Ashberry struck out McClenny.

Straughn put two runners aboard in the fourth and could not score. Gabe Herrington singled but was erased on a 6-4-3 double play. Dawson Peacock and Riley Simmons also singled, as Ashberry held New Brockton in check. The Tigers could not take advantage of a one-out double by Hammett and saw the Gamecocks creep closer. McClenny roped a two-run double in the home half, and Peacock made the score 6-4 with an RBI double. Rogers had an RBI single in the next frame and took the score to 7-4. Abram Guilford went fast and retired the side in order on just six pitches in the bottom of the sixth.

Radford gave SHS some more breathing room with a two-run single in the seventh and scored Hammett and Brooks. Rogers had an RBI groundout and widened the margin to 10-4. Radford scored on a wild pitch before Jared Hawkins singled and plated Lowe with a single for a 12-4 lead. Abram Guilford retired NBHS in order again and closed the game.

Eli Guilford and Hammett were both 2-for-3 with an RBI. Brooks and Radford scored twice and went 2-for-5. Abram Guilford was 1-for-2 with an RBI and scored three runs, as Rogers finished 1-for-4 with two RBIs. Ashberry was the winning pitcher and scattered four runs (three earned) on nine hits in five innings and struck out four.

Straughn fell into a six-run hole and came up short 10-5 in its final game of the tournament. Eufaula took a 2-0 lead in the bottom of the first with a two-run single. Emory Melvin started a two-out rally in the second with a single and moved to second when Hammett was hit by a pitch. EHS kept the game scoreless and then strung together four two-out RBI hits for a 6-0 lead after two innings. Layne Grantham started the top of the third with a single, while Abram Guilford walked, but SHS was stopped. Clark Gay stranded a base runner at third and ended the frame.

Eli Guilford and Ashberry each started the fourth off with a single. After Sikes laid down a sacrifice bunt, Hammett closed the gap to four with a two-run double. Brooks followed with a single and was caught stealing second, while Hammett scored and made the score 6-3 after four innings. Hammett collected an RBI with a bases-loaded walk, and Brooks drove home Eli Guilford on a single as Straughn clawed back to 6-5. Eufaula responded with a pair of runs in the fifth and sixth innings for a 10-5 lead.

Ashberry led off the top of the seventh with a four-pitch walk, and a pitch hit Sikes. Three straight outs thwarted the rally and concluded the game.

Brooks and Eli Guilford each went 2-for-4 at the plate. Hammett was 1-for-2 with three RBIs and a run scored, while Grantham finished 1-for-3. Melvin threw two innings and allowed six runs on six hits. Gay pitched four innings in relief and allowed four runs (two earned) on eight hits.

Straughn returns to action Monday, April 4 with a road contest in Kinston at 4:30 p.m. The Tigers routed the Bulldogs, 13-3, in the first meeting between the teams on Friday, March 4.