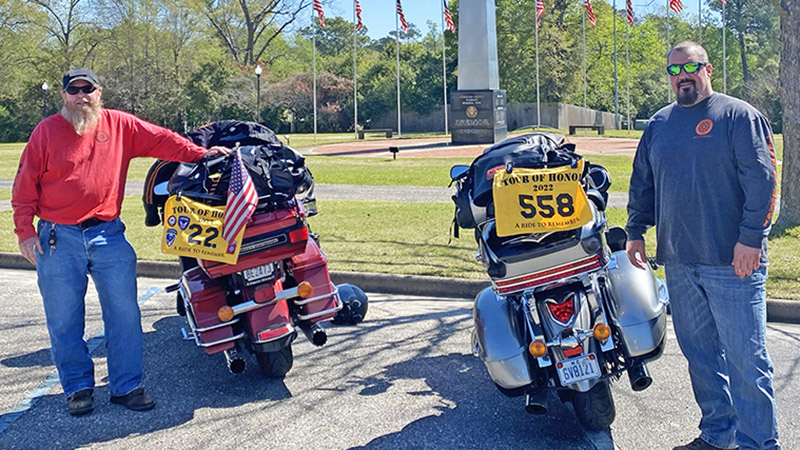 John Morton and Bert Williams of North Carolina made a stop at the Covington Veterans Memorial next to Andalusia City Hall on Friday, April 1. The two participants are taking part in a "Tour of Honor" event. (SUBMITTED PHOTO)

The Tour of Honor, which benefits veterans’ charities, is bringing bikers to Andalusia, and specifically to the Covington Veterans Memorial, this spring.

The event is a season-long, self-directed ride to memorials and monuments in the continental United States, Alaska and Hawaii. The event opened on April 1, and participants have an opportunity to win trophies by being among the first three to visit all memorials in a state. A director for each state chooses the memorial sites, which change each year.

John Morton and Bert Williams of North Carolina were well on their way to claiming two of those trophies when they made a stop in Andalusia at mid-morning on Friday.

The memorial sites for each state were posted Friday, April 1 at midnight. The North Carolinians started just after midnight and had visited memorials in Talladega, Fort Payne, Gadsden and Linden before arriving in Andalusia at about 10:30 a.m. Friday. They were headed to sites in Mobile and Dauphin Island in hopes of claiming the Alabama trophies this year.

Morton and Williams, both sons of veterans, said the rides are a great way to support charities for veterans and first responders and to see the country.

The Covington County Veterans monument was dedicated on Veterans Day in 2004.

The stainless steel obelisk is an original construction by William Merrill and his assistant at Wilco Welding in Andalusia. The 5,000-pound obelisk took approximately four months to construct, and was moved from Merrill’s shop on South Cotton Street to the park area adjacent to Andalusia City Hall via a flatbed trailer, then lifted into place with a crane.