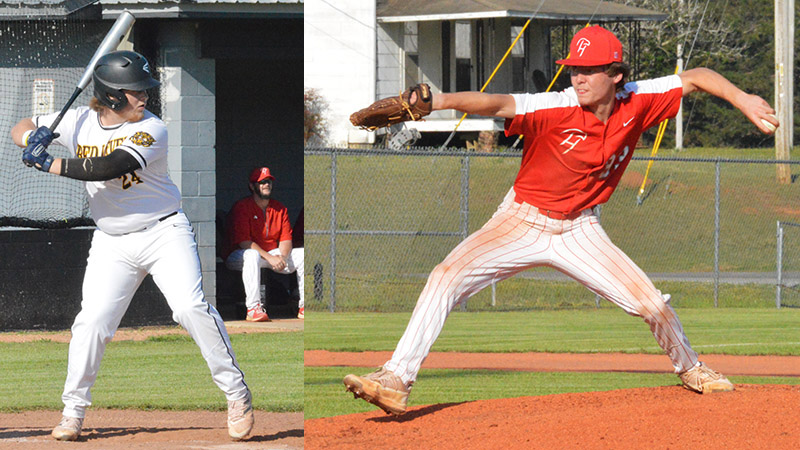 LEFT: Jentry Lee stays focused at the plate during an at-bat for Red Level. RIGHT: Frank Gafford of Pleasant Home gets set to throw a strike to the plate. (PHOTOS BY ZACK MAIO)

In a varsity baseball game with a combined 23 hits and 31 runs, Pleasant Home won a wild contest at Red Level, 18-13, on Monday.

Mason Anderson grounded out to third and drove home Josh Hawkins as the Eagles (8-8) took an early 1-0 lead in the top of the first. The Tigers (2-7) responded back with three runs in the bottom half. Walker Simmons hit an RBI single and scored Buddy Griffin to tie the game at 1-1. Jentry Lee drove in Connor Blackwell on a groundout, and Caleb Padgett knocked an RBI single for a 3-1 lead. PHS drew back even with a pair of runs in the second and took a 4-3 lead in the third. Brock Skipper had a two-run RBI single as RLS retook a 5-4 lead after three innings.

Pleasant Home delivered a big five-run fourth and held Red Level scoreless for a 9-5 lead going to the fifth inning. Both teams scored three times in the frame. Frank Gafford had a sacrifice fly for a 10-5 margin before Ty Clark drove home Anderson and Nathan Fowler on a two-run single. Skipper came up big again with a clutch double and brought the Tigers within 12-7. A wild pitch closed the deficit down to 12-8 before the Eagles worked out of the inning.

The sixth inning was another huge frame for PHS with five runs and opened up some breathing room at 17-8. A pitch hit Tracy Coxwell with the bases loaded, but RLS trailed 17-9 with one inning to go. Hawkins singled to center and scored Griffin for an 18-9 lead. Padgett knocked a two-run single in the bottom of the seventh and made the score 18-11. Skipper followed with a sacrifice fly, while Coxwell reached on an error and closed the scoring at 18-13. Clark ended the game with a strikeout.

Ethan Curry led Pleasant Home at 3-for-4 with four RBIs and Clark at 3-for-5 with five RBIs. Griffin went 2-for-4 with three runs scored as four others recorded a hit.

Padgett, who went 4-for-4 with three runs scored and three RBIs, paced Red Level. Griffin went 3-for-5 with two runs, and Skipper finished 2-for-4 with a run and five RBIs.

The Eagles are scheduled to begin an area series with Samson this week, but the weather will play a factor in how that series is played.

The Tigers are set to host Brantley in a makeup area game Thursday, April 7 at 4:30 p.m.