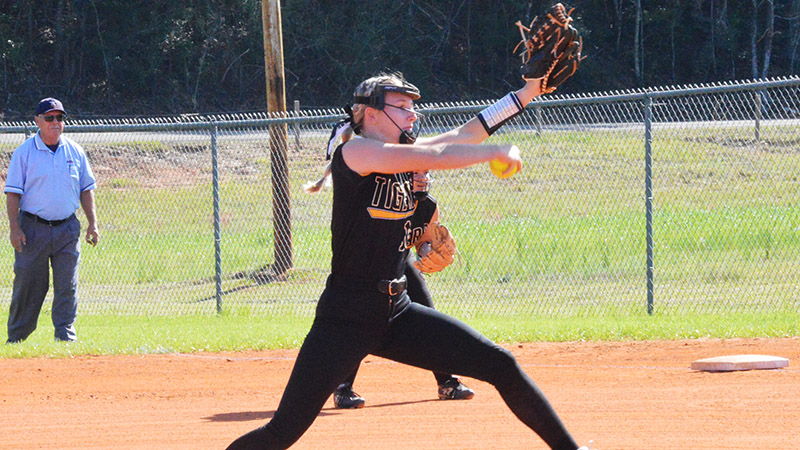 Kaitlyn Beverly fired a three-inning complete game with nine strikeouts and also had two hits at the plate for Red Level on Monday. (PHOTO BY ZACK MAIO)

It did not take long as Red Level rolled to a 15-0 home area win over Georgiana in a varsity softball area contest Monday.

Kaitlyn Beverly struck out the first batter of the game before Ireland Nelson reached on a walk. Beverly caught the next two batters looking at strike three and ended the inning for the Lady Panthers. Elizabeth Cross led off the bottom half with a walk, stole second, and moved to third on a wild pitch. Summer Beverly and Kaitlyn both reached on consecutive errors to give the Lady Tigers (8-10, 1-2 1A Area 3) a 2-0 lead. Bailey Green and Caroline Blackwell also reached on miscues. Kaitlyn pushed across the third run during Blackwell’s at-bat. Green scored on a passed ball, and Blackwell raced home on a wild pitch. Kennedy Lord had a single and scored for a 6-0 lead when a pitch hit Amaya Williams. Lillie Boggan caught a pop-up and closed the inning.

Kaitlyn needed just 11 pitches and struck out the side in the top of the second. Kaitlyn began the bottom of the frame with a single, stole second, and scored on a sacrifice fly from Blackwell. Green and Kayden Lord both walked as Green made it 8-0 on a wild pitch. Kennedy singled up the middle, and an error increased the lead to 10-0. Williams hit an RBI single and scored Zoey Phillips who tripled to right. Cross then stole home, and Williams scored on a wild pitch. Kaitlyn drove in Summer with an RBI single. Green reached on another error as Kaitlyn scored the final run and took the score to 15-0 after two innings.

Tanaysha Boyd had a pinch-hit single with two outs in the top of the third, but that was the only hit of the game for Georgiana. Kaitlyn finished off the mercy rule win with another strikeout and earned the win for Red Level. She allowed just the one hit, struck out nine, and walked one. Kennedy finished 2-for-2 with a run, and Kaitlyn was 2-for-3 with two runs scored and two RBIs for the Lady Tigers. Williams went 1-for-2 with a run and two RBIs, as Cross scored twice. Blackwell also earned two RBIs and scored a run in the win. Boyd led the Lady Panthers at 1-for-1.

The two teams will meet again Thursday, April 7 in Georgiana at 4 p.m.