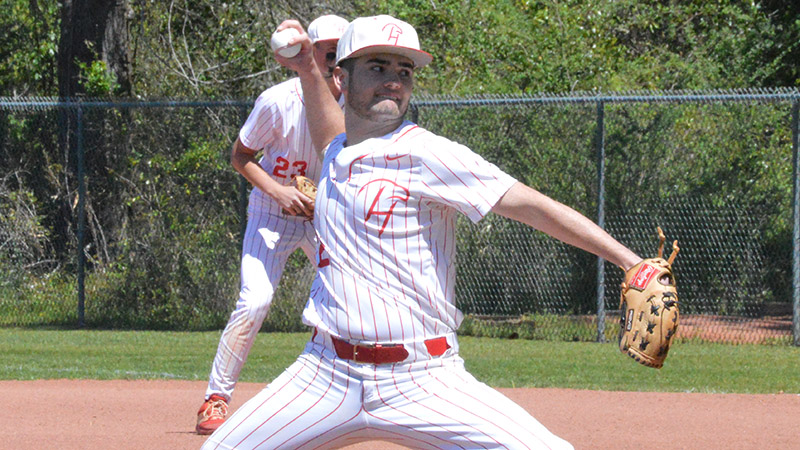 Mason Anderson earned a complete-game win for Pleasant Home in the first game of a doubleheader Saturday against Samson. (PHOTO BY ZACK MAIO)

After dropping the first game at Samson, Pleasant Home rallied with a pair of wins Saturday and won the 1A Area 2 baseball championship.

Game 1: Pleasant Home 6, Samson 3
Jacob Branch and Brodey Mixon reached on singles with one out before Ethan Curry started a 5-3 double play and ended the inning. Ty Clark kept the bottom of the first alive and took first on an error, but the game remained scoreless. Mason Anderson worked around a runner in scoring position in the top of the second and held Samson in check. Pleasant Home was unable to take advantage of two walks in its half.

Anderson worked a 1-2-3 top of the third, and PHS struck first with three runs in the home portion. Frank Gafford came home on a sacrifice fly by Anderson before Josh Hawkins went home on a throwing error. Landon Kelley had an RBI single and drove in Clark for a 3-0 lead. SHS answered back with a run in the fourth. Mixon reached on an error, stole second, and then scored on a groundout from Gunner Glisson to make the score 3-1. The Eagles loaded the bases in the bottom of the frame before a double play capped the inning.

A pitch hit Garrett White in the top of the fifth, but Anderson stymied Samson again. Nathan Fowler led off with a double, and Kelley reached on a force play to put runners at the corners. Brodie Griffin reached on a miscue that allowed Fowler and Kelley to score and widen the lead to 5-1. Griffin scored the third run of the inning on an error and gave Pleasant Home a 6-1 lead after five. Branch began the sixth with a single and reached third, but Anderson picked up a pair of groundouts to end the SHS threat. PHS put together another rally in the home half but was turned away after consecutive strikeouts.

The Tigers did not go quietly in the top of the seventh and scored two runs on three hits. Anderson finished off his complete game for the Eagles with a flout to end the game and forced a winner-take-all contest for the area title.

Game 2: Pleasant Home 10, Samson 4
Samson came out of the gate with an RBI single by Glisson for a 1-0 lead in the top of the first. Pleasant Home drew even when Clark lined an RBI double to right and plated Gafford. Clark then retired the side in order in the second. Curry opened the bottom half with a walk but was unable to score keeping the game 1-1 after two innings. Glisson kept up the good work on the other end with a two-run single in the third and pushed SHS to a 3-1 lead. Fowler made it into scoring position in the last of the frame, but PHS could not break through.

Clark had another 1-2-3 inning and set up a three-run bottom of the fourth. After an error cut the lead to 3-2 in the fifth, Anderson put the Eagles on top 4-3 with a two-run triple and drove in David and Gafford. Clark stayed hot on the mound and once again did not allow a base runner. Fowler started the bottom of the inning with a single before the Tigers had a double play and ended the threat.

Luke Reid reached on an error with two outs and brought home the tying run in the sixth. Pleasant Home erupted for six runs in its half and took a 10-4 lead. Most of the runs came due to defensive miscues by Samson. Clark helped himself with a two-run single as a double play closed the inning. Branch kept the game alive with two outs in the top of the seventh, but it was not enough to overcome.

Both teams finished in a tie atop the 1A Area 2 standings, but due to the tiebreaker game, Pleasant Home is the area champion, and Samson is runner-up. The Eagles return to action Monday, April 11 at Central in Florida and travel to Escambia County in Atmore on Tuesday, April 12.