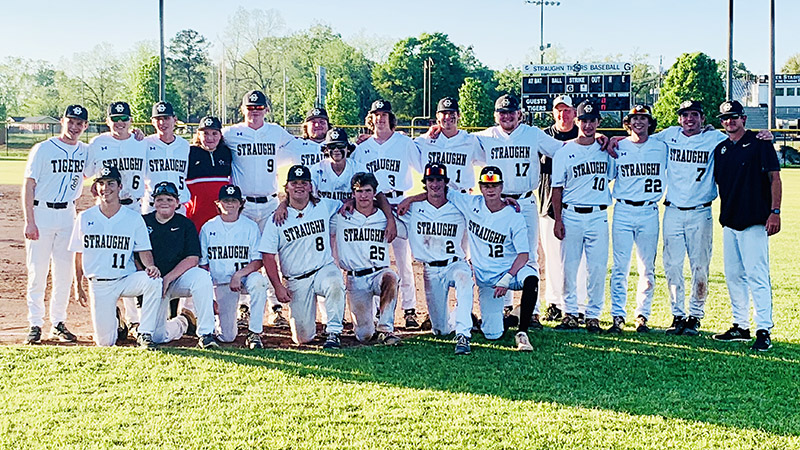 Straughn avenged a 5-0 loss at Dale County Tuesday and clinched the school’s first baseball area championship since 2011 with a hard-fought 4-2 home win Thursday. 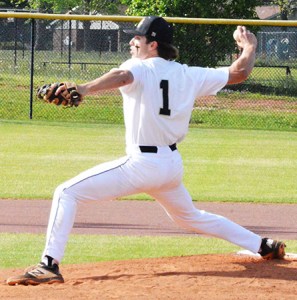 “I’m so happy for our guys. We challenged them coming into the day and knew it was going to be a big moment. We had some seniors really step up tonight, and some young guys played a huge role. It’s something we’ve been preparing for all season, and I’m overwhelmed with happiness for these guys. This is big for our program,” Head Coach Andrew Lowery said. 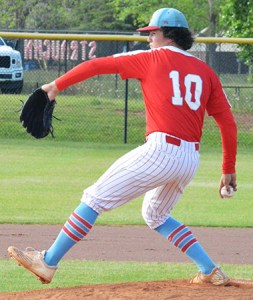 Aiden Wright also allowed two hits for the Warriors in six innings of work on the mound.

Jessie Pelham reached on an error and stole second in the first inning. Pelham moved to third on a passed ball and scored on an RBI groundout by Grant Horne. Cole Weed had a two-out single before a force play thwarted the rally. Aiden Wright retired the Tigers (11-10, 4-2 4A Area 2) in order and maintained a 1-0 lead for the Warriors (12-10, 3-3) whose season came to an end. Tariq Russell kept the top of the second alive, but a groundout ended the frame. Cal Ashberry walked in the bottom half, while Jared Hawkins hit into an inning-ending double play.

Abram Guilford struck out two and turned DCHS away with a 1-2-3 third. SHS then loaded the bases on two hit batsmen and a walk. Wright followed with a pivotal strikeout. Zayd Rogers lined a clutch two-out, two-run single down the left-field line, which scored Samuel Hammett and Clark Gay for a 2-1 lead. Guilford raced home on a wild pitch for the third run of the inning and then struck out the side in the top of the fourth. Ashberry led off the home portion with a walk, as that was all the hosts could muster. 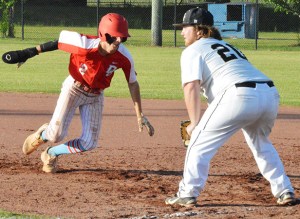 Jessie Pelham, left, scampers back to first base as Zayd Rogers plays defense.

Kaden Wiggins made a nice defensive play for the first out in the fifth before consecutive strikeouts. Guilford extended the lead to 4-1 with a towering two-out solo home run to left. Dale County mounted a rally in the top of the sixth and trimmed the deficit in half to 4-2. Pelham drew a leadoff walk and advanced to second on a passed ball. Ross grounded out as Pelham scored on another passed ball. Horne hit a single through the left side but was erased when Eli Guilford caught him attempting to steal second. Weed then struck out looking for the final out. Ashberry walked with two outs, but Wright held Straughn in check and sent the game to the last inning. 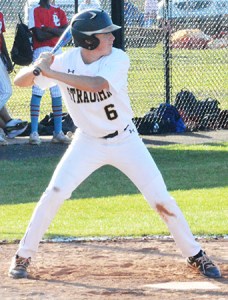 Clark Gay focuses on the next pitch of an at-bat for SHS.

Guilford needed just 10 pitches for the final three outs and was the winning pitcher with a complete game for the Tigers. He gave up two unearned runs on two hits, struck out 10, walked one, and went 1-for-2 at the plate with a home run, two runs scored, and an RBI. Rogers was 1-for-3 with two RBIs for SHS.

Wright took the loss for the Warriors and allowed four runs (three earned) on two hits. He struck out four and walked four. Horne and Weed each finished 1-for-3 and paced DCHS offensively. 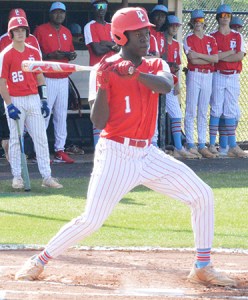 Christian Ross watches a pitch during a plate appearance by DCHS.

Straughn returns to action Friday, April 15 in Luverne at 4 p.m. and welcomes Brantley for Senior Night on Monday, April 18 at 4:30 p.m.