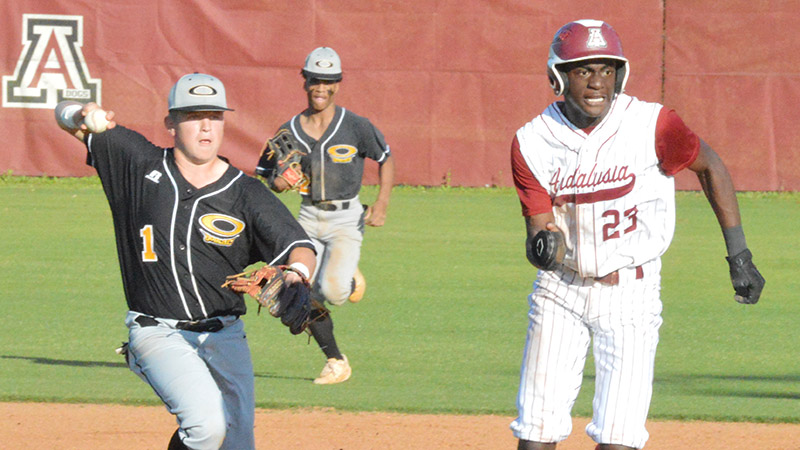 Opp came out swinging in the first inning and added three late insurance runs for a 5-2 win at Andalusia in varsity baseball action Friday. 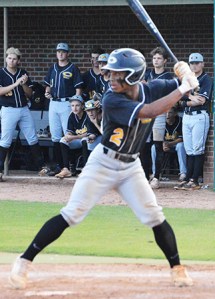 Terry Davis remains focused at the plate and clears the bases with a three-run double for the Bobcats in the sixth inning.

“I’m proud of the effort these guys had today. The seniors had a meeting before we came, and I didn’t know anything about it. They asked the coaches to leave, and when everybody got in there, it was a different atmosphere. The kids were really focused and knew it was all business when we rode over here. We didn’t play very well defensively and competed on the mound. We had that timely hit, and I’m proud of these seniors for going out with two wins against Andalusia. Coach (Tyler) Dent is a class act and does a great job. They’re going to make some noise in the playoffs and do a good job. I can’t say enough about what he has done for Andalusia and am proud of my team,” Head Coach Michael Cassady said. 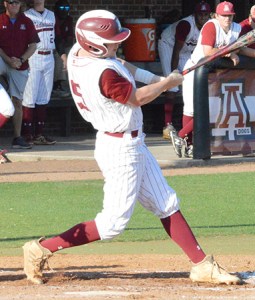 Garrett Blackston follows through on a swing during an at-bat.

Terry Davis doubled on the third pitch of the game and scored on a single up the middle by Robbie Gafford. Ethan Cox reached on an error as Aksh Patel retired the next two batters. Jackson Pierce knocked an RBI single and gave the Bobcats (21-5) a 2-0 lead when Gafford touched home. Andrew Danford earned a walk with two outs, but Patel struck out Tanner Hall for the third out. Ayden Amis led off the bottom half with a single to left and moved to second on a sacrifice bunt from Conner Brooks. Joseph Turner struck out as Parker Adams reached on an error and pulled the Bulldogs (11-12) within a run. The score remained 2-1 when Tucker Glenn flew out.

Davis had a one-out single in the following frame until Gafford lined into a double play. Nino Freeman earned a single in the home half and was picked off for the final out of the second. Walt Spurlin drew a two-out walk as Pierce grounded out to short. Connor Dalton took first on a miscue and went into scoring position with a walk to Brooks. Spurlin came back and preserved the one-run cushion with a strikeout and fly-out. Neither pitcher allowed a base runner in the fourth inning. OHS put a runner at second in the top of the fifth but could not break through. Dalton and Brooks both singled for AHS and were left aboard when Spurlin struck out Turner. 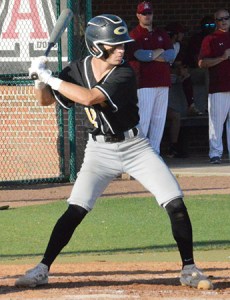 Jackson Pierce watches the next pitch of an at-bat for the Bobcats carefully.

Spurlin opened the sixth with a single to center and reached third on a pair of wild pitches. Danford reached on a fielder’s choice, while Spurlin was tagged out at the plate. A pitch hit Zavier Phillips before Nelson Hall loaded the bases on a single through the left side. After Jake Coon took over on the mound, Davis plated all three runners with a double to the gap. Davis was tagged out at third, but Opp seized momentum and grabbed a 5-1 lead. Andalusia rallied with two outs on a double by Garrett Blackston. Freeman made the score 5-2 with an RBI single and plated Blackston. Spurlin extinguished the rally with a strikeout of Noah Curry.

Cook walked in the top of the seventh but was called out on offensive interference and sent the game to the bottom half. Amis delivered a one-out single, and the game ended on a strikeout by pinch hitter Jack Day. 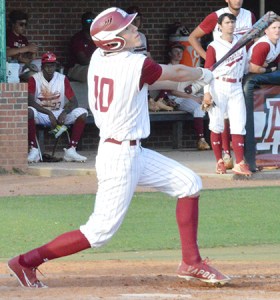 Noah Curry swings for the Bulldogs and keeps a close eye on the ball.

Spurlin notched the win by pitching seven complete innings and allowing two runs (one earned) on seven hits. He struck out eight and walked one. Davis led the Bobcats offensively and went 3-for-4 with three RBIs and scored a run. Pierce and Hall were both 1-for-3, while Gafford was 1-for-4 with an RBI and a run.

Patel took the loss and gave up five runs (four earned) on six hits in 5 2/3 innings. He struck out one and issued two walks. Coon pitched the final 1 1/3 innings in relief and allowed one hit, struck out one, and walked one. Freeman was 2-for-3 with an RBI and paced the Bulldogs at the plate. Amis finished 2-for-4 and scored a run, and Brooks went 1-for-2. Blackston and Dalton both earned 1-for-3 outings.

Andalusia and Opp will each host a first-round playoff series this weekend.