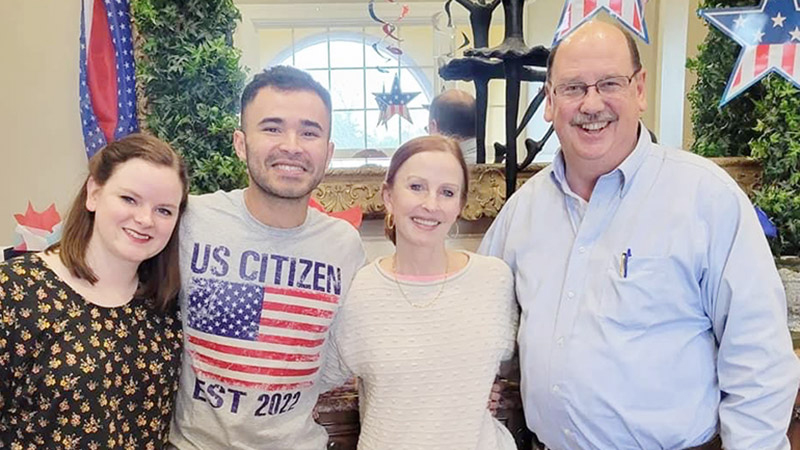 Andalusia Ballet held a surprise reception on Friday, April 8 and recognized José Soares for becoming a U.S. citizen with the passing of his citizenship test. Pictured are, from left, Meredith Soares, Soares, Meryane Murphy, and Mark Murphy. (SUBMITTED PHOTO)

Brazilian native José Soares came to the United States and pursued a love of teaching and performing ballet so much that he stayed and recently became an official U.S. citizen.

“Becoming a citizen of this great country means the world to me. America has been my home for almost 12 years. Becoming a citizen just sealed the deal. I chose to become a U.S. citizen because I wanted to be able to vote. I didn’t vote in the past election cycles, and that bothered me,” Soares said. 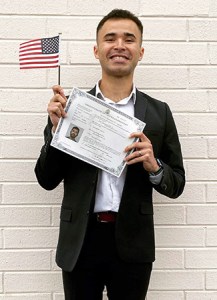 José Soares was happy the wait was worthwhile after passing his citizenship test to become an official U.S. citizen.

While living in Teresina, Piauí, Brazil at the age of 17, Soares received a scholarship to dance with Joffrey Ballet Chicago. He relocated to America from Brazil in June 2011. He has been a dance instructor for the last seven years and resided in the state of Missouri. After moving to Andalusia in July 2020, he accepted a job working at Andalusia Ballet teaching ballet and contemporary dance.

“My process toward becoming a U.S. citizen started in August 2021. It was long, but once I got my interview letter, everything went super fast and smoothly. Waiting was the hardest part for me.”

Soares added that living in the United States of America does not compare to his country. “Everything is different from the way we eat to the way we talk to our neighbors. I haven’t been in Brazil for almost eight years. I don’t know how it’s like to live in Brazil anymore.”

He offered some important words of advice to others seeking to take the same journey toward citizenship. “Be honest about why you want to become an American. Get your documents ready as soon as you can. You can’t have too many documents to support your case.”

Soares is grateful for the opportunity to live in America and the friends he has made.

“Life, liberty, and the pursuit of happiness truly find their meaning here in the USA thanks to that freedom. I am able to do what I love and have a great life to go with it. I didn’t become an American alone and have great people helping me along the way. My wife Meredith Soares, Meryane Murphy, and Mark Murphy were there to help me along the way and supported me throughout the process. As I sat down to study for my citizenship interview, I had an amazing cup of coffee from Blue Bird Coffee Company. All of that helped me get where I wanted to be. I can’t forget about my students and parents at Andalusia Ballet. Living in Andalusia helped me understand how blessed we are to live in this great country. Andalusia is a gem,” he said.