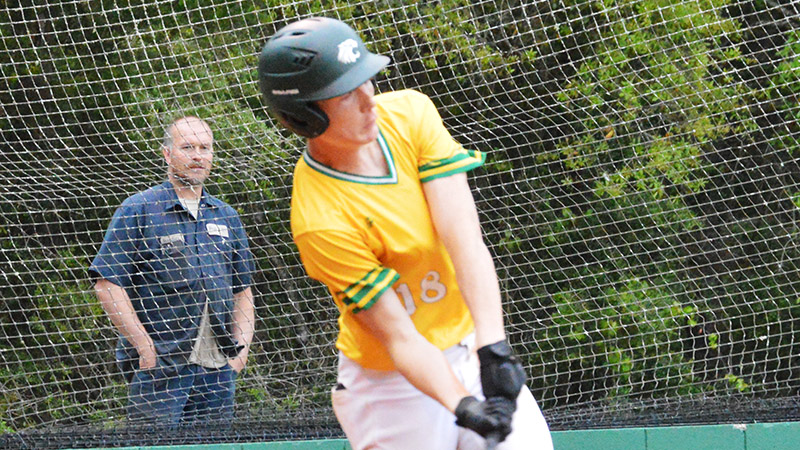 Colby Strickland concentrates on the next pitch of an at-bat for Florala. Strickland threw seven innings in the final game of the season as the Wildcats defeated Laurel Hill, 8-6, Tuesday. (FILE PHOTO)

Despite missing the playoffs, Florala rallied for an 11-9 win over Red Level Monday and capped the 2022 baseball campaign with an 8-6 win Tuesday against Laurel Hill.

“I am proud of this team, especially my junior group who all started with me in the eighth grade. Many of them then were far from being the players they are now, and some had never picked up a baseball before. It makes me proud to see them succeed as players and men. This year’s team had the most wins for Florala since 2014. There were no seniors and nine eighth and ninth graders. We have had our share of highs and lows this year, but they put in hard work and finished strong. We are very proud of them and look forward to getting to our next step in 2023,” said Head Coach Tyler Zessin.

Florala 11, Red Level 9
The Wildcats (12-13) took a 3-0 lead after two innings. Kennith Dalton Jackson had an RBI single and drove home Colby Strickland with the first run. John Howell reached on an error as Jackson scored, while Ayden Brooks knocked an RBI single and brought in Howell. The Tigers (6-9) responded with five runs in the third inning. Connor Blackwell roped a single and sent Caleb Padgett to the plate with the initial run. Walker Simmons followed with a single, while Blackwell and Simmons each scored on miscues and tied the score at 3-3. Grayson Hodges added a two-run single as Tracy Coxwell and Brock Skipper scored for a 5-3 lead. Brooks used another RBI single and trimmed the deficit to 5-4 when Howell scored in the bottom half.

RLS put two runners aboard in the fourth but was held scoreless. Three straight hits and a sacrifice bunt led to five runs and gave FHS a 9-5 lead. Red Level answered back with a three-spot and closed the gap to 9-8 in the fifth with RBIs by Padgett, Simmons, and Skipper. Howell then earned a two-out, two-run single and gave Florala an 11-8 lead after five innings. Buddy Griffin had an RBI single in the sixth and cashed in Hodges with the final run of the contest. After the Wildcats went quietly in the bottom half, the Tigers loaded the bases in the top of the seventh and came up empty when Seth Bundy preserved the win.

Florala 8, Laurel Hill 6
Strickland held Laurel Hill off the board and, Florala loaded the bases in the bottom of the first with no outs. Howell had a sacrifice fly and scored Zamora, who took a leadoff walk. Neither side mustered anything in the second and kept the score 1-0. The Hoboes (4-9) took a 2-1 lead with two outs in the top of the third. Aaron Smith drew a walk and scored the tying run on an RBI double by Josh Senterfitt. After advancing to third on a wild pitch, Senterfitt scored on an error. Jackson opened the home half with a long home run and tied the score. Christian Greasham knocked a two-out single and plated Howell as the Wildcats took a 3-2 lead after three innings.

Strickland needed only seven pitches for a 1-2-3 top of the fourth. FHS added to its lead and cashed in a pair of walks to Strickland and Jackson. Bundy ripped an RBI single through the left side for a 6-2 lead. Benny Hudson rallied back to get the last two outs. LHS pulled within a run on a two-run single from Senterfitt and an RBI groundout by Levi Reed in the fifth. Strickland then drew a bases-loaded walk in the home half, and an error sent Zamora home for an 8-5 lead. Strickland worked a nine-pitch sixth and retired the side in order. Following a quiet bottom of the sixth, Reed cut the deficit to 8-6 in the final inning. Strickland struck out Chance Oglesby and extinguished the rally.

Greasham went 1-for-1 with a run scored and an RBI. Jackson, Howell, Bundy, and Brooks each added a hit for Florala in the win. Strickland earned the complete-game win and allowed six runs (four earned) on five hits. He struck out seven and walked five. Senterfitt paced Laurel Hill with a 3-for-4 day and had three RBIs with a run scored. Hudson absorbed the loss and allowed six runs (two earned) on five hits in four innings. He struck out eight and walked six. Neal Twitty pitched two scoreless frames in relief.