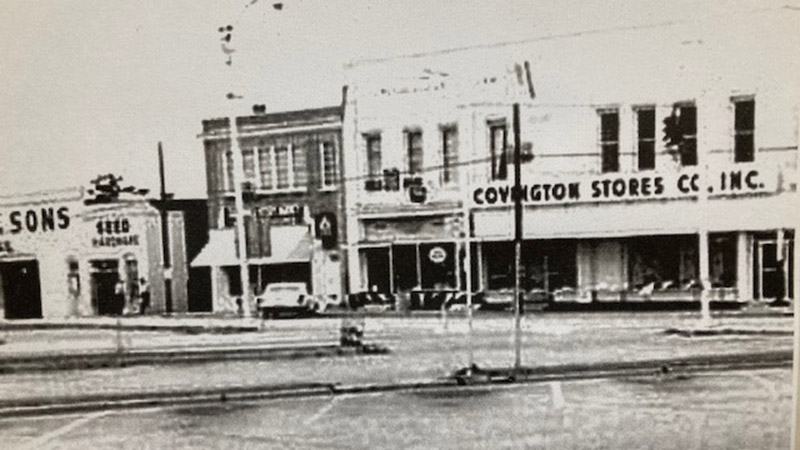 “The grand old store on Court Square in Andalusia” – That was how some local citizens remember Andalusia’s first department store. I think I jogged some people’s memories when the subject about Covington Stores came up on social media recently. Here are some reflections on this store that featured clothing for men and women. It was located on the southeast corner of East Three Notch Street and “the square.”

This business was launched in 1930 with the purchase of the old Shreve Brothers department and mercantile establishment by G. Graham Dunn and his associates according to Mr. Dunn’s obituary in The Andalusia Star News in December 1961.

“Dunn, a farm boy reared near Prattville, attended school there before entering Naval service in World War I. A member of the crew of the USS Rundam, Dunn crossed the Atlantic thirteen times during the hostilities that was capped with the sending of American Expeditionary forces into France.”

“At the conclusion of the war, Dunn entered the commissary business with a naval stores firm in Mississippi, coming in the early 1920s to River Falls where he was associated with the Wright Brothers and Caton, who operated a commissary serving the old Horse Shoe Lumber Company.”

“Subsequently, Dunn purchased the Caton interests in this firm, but with the disastrous 1929 flood, this business was dissolved and Dunn came to Andalusia to help organize and head Covington Stores, Inc. where he was the charter president of this firm and served as the manager of the business beginning in 1930.”

Dunn, 65-year old pioneer Andalusia merchant was a leader in the civic, business, and political affairs of Andalusia for four decades. He was a Rotarian and active in the Retail Merchants Association. In 1948 Dunn was elected a member of the Andalusia City Council, a post he held for two terms until 1956. At the time of his death, he was an elder of the First Presbyterian Church where he served earlier as a deacon. Active in the American Legion, Dunn was a past Commander of Post No. 80 in Andalusia. He and his wife Katheryn were parents of three daughters, Mrs. Tisdale Brooks(Dorothy), Mrs. William Meeks(Joy), and Mrs. Travis Cosby, Jr.(Mary Louise).

The Andalusia Star News – January 31, 1928 – “The name of Covington Stores, Inc. has been a trademark of year in, year out quality merchandise in Andalusia.”

April 18. 1935 – “The Covington Stores is considered an institution in Andalusia. This store has taken on the appearance of a city department store with all conveniences and advantages at hand for the benefit of their patrons and customers. Here the necessities for the entire family may be found at reasonable prices.”

October 23, 1947 – “A novel stunt was staged by the Covington Stores Company last Saturday when the people of this area were given an opportunity to guess at the length of time it would take a 100-pound block of ice to melt. A pair of Wolverine work shoes were frozen inside the block of ice.”

“The block of ice came to naught in 22 hours and 45 minutes. Johnnie Stokes, Dunson Street, came the nearest to guessing the exact time it would take the block to melt. His guess was 22 hours, 30 minutes, and 10 seconds. For this honor, he was awarded a pair of Wolverine work shoes.”

Friends with such good and amazing memories posted on social media:

Rick Russell – “I got two pair of Tuff Nut jeans at the start of school each year. Got a pocket knife to go with them. I loved the old squeaky wood floors in that building.”

Ruth Cook – “My dad worked there for years – Homer Brooks.”

John Tisdale – “I still have the original cash register from Covington Stores.”

Patricia Patterson Arant – “My mother Addie Ruth Patterson worked there for many years. She was the alteration lady as well as a sales lady.”

Roger Powell – “Daddy (Keltys) worked there in the office and selling clothes for the Dunn and Meeks families for many years. We’d often go with him at night when he did office work and explore the store. I remember the hidden mezzanine in the rear, the huge office safe, the wrought iron grill at the office counters, the ledger books, the amber colored shades in the show windows that were rolled down for the afternoon sun, the tall hat stands, the long pole that lifted the men’s hatboxes off the high shelf, the antique cash register, the phone on the column in the center, and the hidden doors in the show windows where you could peep in at night and watch the traffic. And of course, I remember the Dunns, the Meeks, Homer Brooks, Earl Pope, Bertha Hutto, Odessa Morrow, Birdie Stewart, Mrs. Harvey, Mrs. Fincher, Jimmy Syler, Linda Macon, and a host of others who worked there during the years.”

Gail Wise Savage – “I got to pick out my first set of Samsonite luggage. I had the white and mother had the blue. I was so excited to travel places with my three-piece set.”

Kay Bell Grubbs – “Mother would take me to Covington Stores when I needed a special dress. The dressing room was big and in the back of the store where the seamstress worked.”

Mary Rogers Adams – “I loved to shop with my Mom there on Saturdays. They always had the Auburn games on the radio as did many of the stores on the square. Most of my sweaters came from there.”

Richard Henry Jones – “The legs had to be cuffed on those Tuff Nut jeans until I grew into them which I never did. Mama Caton or Mother (Merle) always had to shorten them to fit me.”

Debra DuPree Williams – “I love the old thread box and all the old stuff, buttons and notions, in the cabinets.”

Paula Sue Sexton – “I remember buying a Jantzen bathing suit there. (I do, too, Paula Sue!)”

Carolyn Rodgers Hart – “I remember it was a meeting place. The families would come to town. The women had to go first to the dime stores, and the men would have to get haircuts. So each went their way and met back up on the corner of Covington Stores.”

Caroline Eiland Busbee – “I remember buying stockings there. They were in boxes stacked behind the counter. The clerks would put on cotton gloves and take a pair out of the box and wrap them in tissue.”

Barbara Henley – “I remember the floors creaking as you walked through the store. They were shiny and pretty.”

Marianne Merrill Weber – “There were ladies’ dresses on racks in the back of the store. Near the front were stacks of boys’ pants and also shoes. I also remember stacks of sheets, towels, and pillow cases.”

Ruthie Harris Sharp – “Ladies dresses were on one side of the store and mens clothes were on the other side. There was a counter that held gloves and handkerchiefs.”

Pat Rawls Barton – “They sold material by the yard. I bought material there to make my first garment in Home Ec. Charged it to my dad, and he was quite shocked at the price. I hadn’t even priced it, and it was $4.00 a yard, a lot in 1959.”

Dr. Richard Merrill – “I remember the way the building used to be out front where it formed a seat. Farmers sat there on Saturdays and spit tobacco toward the street. The city finally passed an ordinance that they could not sit there.”

Joe Maddox – “That is where my mother would take us to get shoes usually after picking cotton or picking up pecans that we sold.”

In conclusion, I remember one particular recollection by Dr. Bill Hansford who has written books and many one-of-a-kind stories about growing up in Andalusia. He recalled when he was a child or young man waiting on his mother Grace to shop in Covington Stores. “That was her favorite place to shop especially for buying hats,” he stated. On the ladies side, he would sit on a bench of chairs near the entrance to the store sometimes visiting with Mrs. Addie Bell Guy, a colorful character who had difficulty hearing which she did not admit. She lived to be in her 90s and would love to come to the store dressed up “fit to kill” in fancy apparel and with costume jewelry, bangles and bracelets, big hats, gloves, and often a fur. It was just her pleasure to sit there and watch customers come and go before or after she shopped. Hansford vividly remembers the unique aroma of the store with all its newness and the items of very fine quality.

Covington Stores – a “grand old store” it was! Thank you, friends, for helping to make this story one to remember in significant ways. I think you will enjoy seeing this photo of the storefront that I found displayed at the Three Notch Museum. I might add, the restored building is now the Murphy building and is still a grand old building today.