Opp and Pleasant Home both earned sweeps in the first round of the AHSAA state baseball playoffs, while Red Level forced three games but came up just short.

Opp vs. Excel
The Bobcats (23-7) swept Excel behind two strong hitting and pitching performances. Opp won the first game, 13-1, in five innings, and then routed the Panthers, 14-2, in the second game. 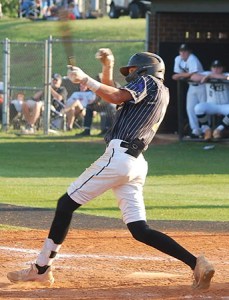 Jordan Jacobs hit two home runs for the Bobcats during their first-round sweep of Excel on Friday. (PHOTO BY TRIPP NORRIS)

Game 2: Opp 14, Excel 2
Tanner Hall earned the win in the second game and threw five innings. He allowed two hits and struck out seven. Tanner Burlison pitched the final two innings in relief and allowed two runs on six hits and struck out two. Cody Walsh went 2-for-4 with two singles, two RBIs, and a run scored. Jackson Pierce was 1-for-2 with a triple, RBI, and run scored. Terry Davis finished 1-for-3 with a double and two runs scored. Jacobs added another home run and earned a 1-for-3 showing with two RBIs and two runs scored.

Opp will host T.R. Miller in the second round.

Pleasant Home vs. South Lamar
The Eagles (13-11) took down South Lamar in a pair of home contests. The Eagles won the first game, 7-2, and then routed the Stallions, 16-6, in the second game behind a huge eight-run fourth inning. 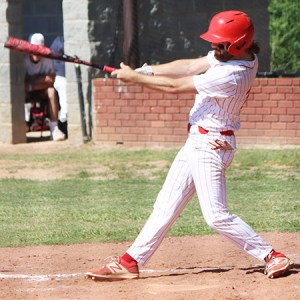 Pleasant Home will travel to Sweet Water in the second round.

Red Level at Maplesville
The Tigers (8-11) went the distance with the Red Devils and won the second game in dramatic fashion, 10-9. Maplesville took the first and decisive third games and ended the season for Red Level. 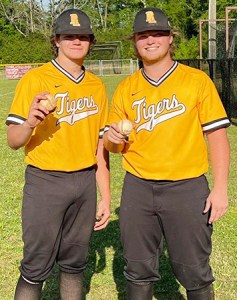 Game 2: Red Level 10, Maplesville 9
Brock Skipper began the game and allowed nine runs (one earned) on 10 hits in 5 2/3 innings. He struck out three and walked four. Lee finished out the game in relief and allowed one hit, struck out one, and walked one in the final 1 1/3 innings. Walker Simmons went 3-for-4 with a home run, five RBIs and a run scored. Brody Griffin, Caleb Padgett, and Grayson Hodges all had two hits, while Lee added a two-run home run. Tracy Coxwell had the game-winning sacrifice fly in the bottom of the sixth.

Game 3: Maplesville 12, Red Level 2
Griffin threw five innings and allowed eight runs (six earned) on eight hits. He struck out one and walked seven. Simmons started the game on the mound and also went 1-for-3 with a run scored and an RBI. Blackwell finished 2-for-4, while Coxwell added the final hit.