Straughn advances to second round with sweep of Dora 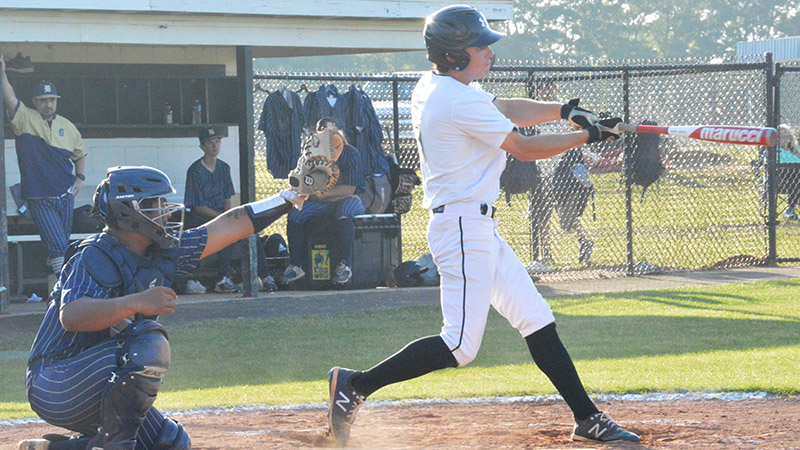 Emory Melvin follows through on a swing during an at-bat. Melvin had four hits for Straughn in a first-round doubleheader sweep against Dora on Friday, April 22. (PHOTO BY ZACK MAIO)

Straughn scored 24 runs in a home doubleheader sweep against Dora in the first round of the AHSAA state baseball playoffs Friday, April 22.

Game 1: Straughn 11, Dora 1
Both teams each put together a first-inning rally but went scoreless. Dakota Cobb doubled with two outs but was stranded in scoring position. Abram Guilford and Saxby Radford each walked in the bottom half as Garrett Hogland rallied and picked up three straight outs. DHS received a leadoff walk to James Mata before a double play closed the frame. Hogland retired SHS in order in the bottom of the second. Dora mounted another rally in the third but could not score. Guilford tripled and scored the first run of the game on a single by Radford. Emory Melvin knocked a two-run double, and Jared Hawkins capped the inning with an RBI single. Straughn took a 4-0 lead after three frames.

The Bulldogs were once again held off the scoreboard despite a leadoff single and error. The Tigers doubled their lead with a four-run bottom of the fourth. Cal Ashberry walked with the bases loaded as Radford scored the next run on a balk. Eli Guilford then lined a two-run single and scored Rogers and courtesy runner Layne Grantham for an 8-0 lead. Dora scored its only run when Boone Martin grounded out and scored Carson Fowler who reached on an error. Straughn went quietly in the last of the fifth, as the score remained 8-1.

DHS could not muster anything in the sixth and set the stage for the bottom half. Following a hit by pitch, Ashberry hit a long two-run blast for a 10-1 lead. Two straight singles by Eli and Hawkins led to a walk by Samuel Hammett. Clark Gay then walked off the first win with an RBI single and drove home Eli with the game-winner for SHS.

Abram, Eli, and Hawkins all had two hits in the game as the Tigers finished with 11. Hogland led with two hits for the Bulldogs. Ashberry was the winning pitcher and allowed five hits on one unearned run. He struck out four and walked three. Hogland took the loss with six hits on seven runs, while striking out six and walking four in 3 1/3 innings.

Game 2: Straughn 13, Dora 5
Eli walked and drove home Rogers for the first run of the second game. Mata tied the score at 1-1 in the bottom of the first with an RBI single and brought home Martin. Radford doubled and plated Abram who had a two-out single. Dora put together another rally attempt but could not take advantage and left the score 2-1 after two innings. Straughn added to its lead with two runs in the top of the third. Melvin scored on a passed ball before Hammett brought in Hawkins with a long RBI triple. Hogland reached on a miscue and then scored on an errant throw to make the score 4-2. The Tigers roared to five runs in their half of the fourth. Back-to-back RBI doubles from Rogers and Ashberry put the score at 6-2. Gay then unloaded the bases with a two-out, three-run double and widened the lead to 9-2. The Bulldogs drew back within 9-4 on an RBI groundout from Martin, and a passed ball plated Camdan Hines.

Riley Brooks scored on a passed ball in the top of the fifth before a fast 1-2-3 bottom half. Straughn erupted again in the sixth with three runs and held Dora scoreless for a 13-4 lead after six frames.

The Tigers did not score in the top of the seventh as the Bulldogs mounted a last at-bat rally. Martin and Hogland singled before a pitch hit Harris. Mata drove in Martin on an RBI single as Hogland was tagged out at the plate before a groundout closed the game.

Melvin and Hawkins both had three hits in the game and were followed by two each from Abram and Ashberry for Straughn. Mata earned two hits for Dora. Abram took the win with a complete-game effort and allowed four hits on five runs (two earned). He struck out four and walked one. Cobb pitched 5 1/3 innings and suffered the loss with 13 hits on 12 runs (nine earned). He struck out two and walked four.

Straughn will travel to Montevallo for the second round Friday, April 29, and Saturday, April 30 if needed.