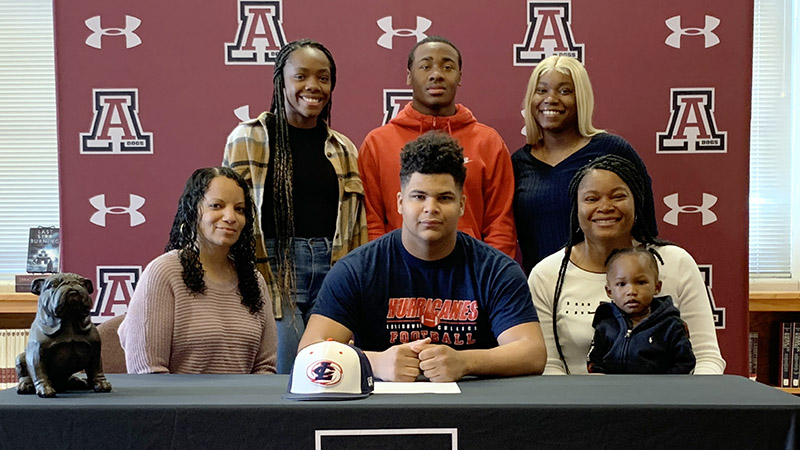 Andalusia High School senior Diandre Sheridan is off to the Tar Heel State following graduation after signing his National Letter of Intent to Louisburg College on Wednesday, April 20.

A private Methodist-affiliated college in Louisburg, North Carolina, Louisburg College is the only two-year residential institution in the state. The Hurricanes finished the 2021 season with a 4-2 overall record and faced teams from the National Junior College Athletic Association’s Region 10. 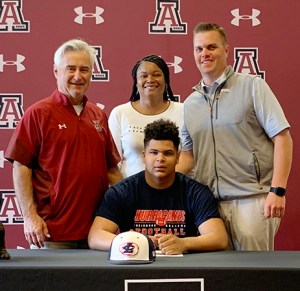 “I am grateful for this opportunity because I’ll be the first in my family to play college football. I’m doing what I dreamed to do and looking to go start for Louisburg. I liked the idea of going to a junior college because I could start right away. I was comfortable at LC like I was at home and really loved it. I was also the top-rated defensive lineman recruited there,” Sheridan said.

He finished with 39 tackles (13 solo, 16 assist) for the Bulldogs during the 2021 season. Sheridan also added 10 tackles for loss, four sacks, and four QB hurries.

“I’m very proud for Diandre and hope he will take full advantage of this opportunity. He’s a young man who has dealt with a lot of things and came back to us this year. He worked really hard to get on the field and wanted to be an offensive guy. Because of the needs we had on the defensive line, we told him he had to prove himself defensively before we would use him any offensively. He did a great job despite not having played as a defensive lineman before. We also used him some at tight end. This opportunity gives him two years to develop and see if he can find another home after this. Diandre has had some tough times and battled back through them. I feel like this will be really good for him,” Head Coach Trent Taylor said.

When asked what he will miss the most about being at Andalusia, he said the atmosphere on game day. “There is most definitely nothing like Friday nights. I will really miss the coaches, teammates, and teachers. I learned a lot in just a couple of years and send much love to all the coaches who were a part of my journey. My biggest highlight was probably the UMS-Wright game when we got the stop on fourth down and won the game.”

Sheridan started playing football when he was five years old and called his family his biggest inspiration.

“With the experiences, I have had about two years ago, I had to really buckle down and wouldn’t be here without my family. I started playing because of Alabama head coach Nick Saban. I will miss my friends and family for sure. It will be a big adjustment for me, but it will be good. It’s dog eat dog when I go,” he said. 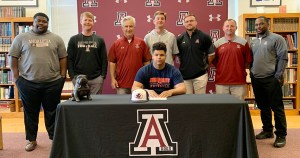 The Andalusia High School football coaches thanked Sheridan for his contributions to the Bulldogs.

Sheridan is the stepson of Melissa Wright and has two stepsisters, Dandrea Crittenden and Alexandria Crittenden. He will graduate from Andalusia High School on Friday, May 20, 2022.