Opp takes down T.R. Miller, moves on to quarterfinals 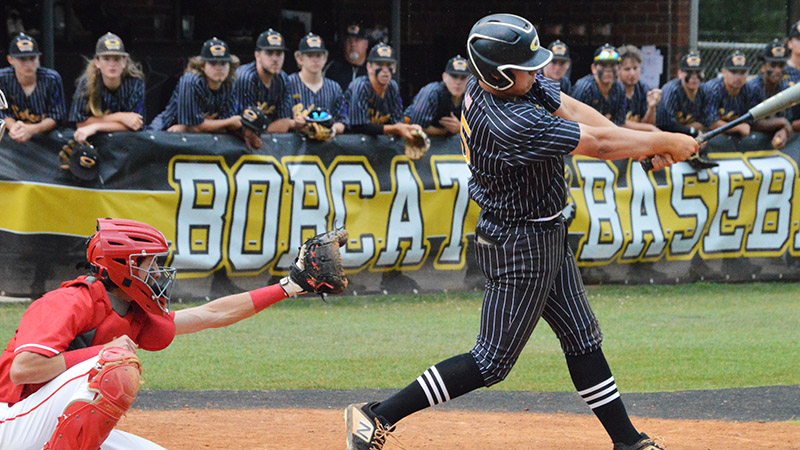 Tanner Hall, right, had five hits during Opp’s second-round series win at home against T.R. Miller, and follows through on a swing during an at-bat Friday, April 29. (PHOTO BY ZACK MAIO)

It took three games against a tough T.R. Miller team, but Opp won two of three in the second-round matchup and advanced to the 3A state quarterfinal round.

Game 1: Opp 9, T.R. Miller 2
Walt Spurlin started the first game and got two quick outs. Kyle Blevins walked and scored the first run on an RBI single by Jaxson Flores. Opp (25-8) put a two-out rally together but was turned away and kept the score 1-0 after one inning. T.R. Miller (22-6) had two runners on in the second before a pickoff ended the threat. Jackson Pierce then led off the home half with a triple and scored when Tanner Hall singled to center. Terry Davis delivered an RBI single and plated Hall for a 2-1 lead after two innings.

Miller Hart had a sacrifice fly in the top of the third. Cody Walsh walked with one out in the bottom of the frame and scored on an RBI double by Hall. Neither side scored in the fourth and kept the game at 3-2. After Spurlin struck out two Tigers in the top of the fifth, the Bobcats added some insurance with four runs in their half of the inning. Pinch-runner Zavier Phillips scored on an error before Pierce hit a long two-run blast. Hall then reached on an error and scored on a wild pitch for a 7-2 lead after five innings.

TRM mounted another two-out rally in the top of the sixth with two runners aboard. Spurlin averted the threat unscathed as OHS scored its final two runs in the bottom half. Robbie Gafford walked and scored on an RBI double from Ethan Cox. Pierce added a single and brought home Cox. Spurlin needed just nine pitches in the seventh and retired the side in order to end the game.

Pierce finished 3-for-4 with three RBIs and two runs scored. Cox was also 3-for-4 with an RBI and a run scored. Hall and Davis each went 2-for-4. Spurlin earned the win with a complete-game effort and allowed two runs on six hits while striking out eight.

Game 2: T.R. Miller 4, Opp 3
Bracken Pettis bunted in the bottom of the first and reached on a miscue. Blevins brought in Pettis with the first run on a sacrifice fly, as the score remained 1-0 going to the third. Davis and Gafford walked, while a pitch hit Cox and loaded the bases. Following a strikeout, Davis and Gafford both scored on wild pitches to give Opp a 2-1 lead. T.R. Miller answered back with an RBI single by Pettis and RBI double from Blevins and took a 3-2 lead after three innings.

Neither side was unable to score over the middle innings and set up the seventh inning. Pierce reached on a two-out error and kept the game alive. The Bobcats tied the game on a wild pitch. The Tigers then loaded the bases on a double, single, and intentional walk. Flores walked it off with a single and scored Hart with the game-winning run. Davis was 1-for-1 with a single and a run scored. Burlison added the only other hit for OHS. Hall took the loss and allowed three runs (two earned) on four hits and struck out five in 5 2/3 innings. John Helms and Andrew Danford each pitched 1/3 inning in relief. Flores was the winning pitcher for TRM and gave up one unearned run in two innings.

Game 3: Opp 11, T.R. Miller 1
Opp took a 9-0 lead after two innings and did not look back for a decisive win in the third game. T.R. Miller pushed across its only run of the contest in the top of the fourth. Kade Taylor walked it off with an RBI single and drove home Cox with the game-winning run in the bottom of the sixth. Hall was 3-for-3 with three singles, three RBIs, and a run scored. Spurlin and Gafford each went 2-for-3 with a single, double, RBI, and run scored. Pierce added a 2-for-4 showing with two singles, an RBI, and two runs scored. Walsh threw six innings and allowed one unearned run on three hits while striking out three for the win.

The Bobcats will make their third straight quarterfinal appearance and travel to Trinity in Montgomery on Thursday, May 5, and Saturday, May 6 if needed. Game times are 1 and 3:30 p.m. on Thursday and 1 p.m. Friday.