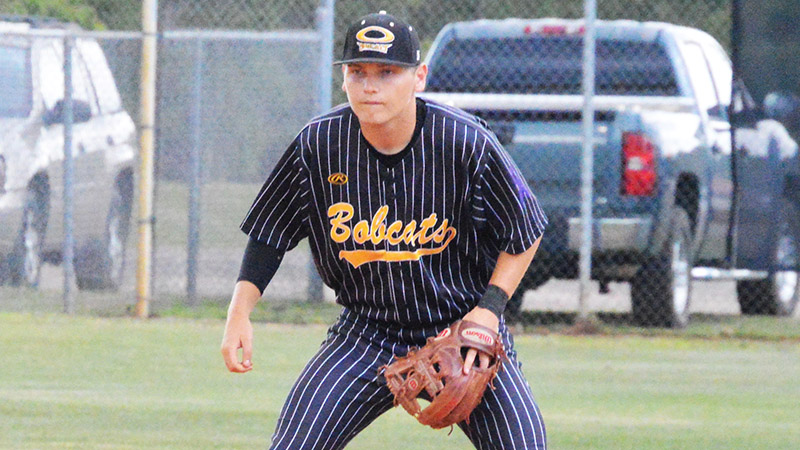 Tanner Burlison remains focused on defense at third base for the Bobcats. (FILE PHOTO)

Opp put forth a strong effort in the third round of the AHSAA 3A state baseball playoffs but came up short in a doubleheader to Trinity on Thursday, May 5.

Game 1: Trinity 7, Opp 3
Ethan Cox walked before Cody Walsh singled with two outs in the opening inning. Courtesy runner Nelson Hall stole second, but Ben Easterling escaped with a fly out. Walt Spurlin led off the bottom of the first with a strikeout and only allowed a two-out single to Grayson Ashe. Spurlin opened the second with a single as courtesy runner Colby Ballard moved into scoring position on a sacrifice bunt by Jordan Jacobs. Easterling fought back and retired the next two OHS batters. TPS then loaded the bases on a pair of walks and a fielder’s choice. Jordan Jenkins drove home David Lieux with the first run on a sacrifice fly. Spurlin set the ensuing two batters down on four pitches.

Opp mounted a two-out rally in its half of the third when Cox and Walsh reached, but Easterling preserved the 1-0 lead. Easterling walked in the home portion but was picked off at first for the third out. Tanner Burlison singled in the top of the fourth, and a pitch hit Terry Davis. Easterling eluded further damage and saw Trinity erupt for six runs. Consecutive doubles by Brady Rascoli and Jenkins pushed the lead to 4-0. An error and wild pitch took the score to 6-0. Easterling capped the frame with an RBI double for a 7-0 lead after four innings.

Jackson Pierce and Cox started a rally in the visiting fifth with back-to-back singles. Easterling maintained the shutout with a strikeout and two groundouts. John Helms also stranded two runners in scoring position and sent action to the sixth. Jacobs led off the inning with a single and took third on a double from Davis. Robbie Gafford then put the Bobcats on the board with a sacrifice fly and scored Jacobs. After Pierce walked, Cox earned an RBI single and plated Davis. Walsh cut the deficit to 7-3 with an RBI single and plated Pierce. Webber McClinton took over on the hill and ended the inning with a groundout. Helms retired the Wildcats in order in the home half on eight pitches.

Burlison kept hope alive with a two-out single before the game ended. Walsh finished the game 3-for-4 at the plate. Cox and Burlison were each 2-for-4, and Davis was 1-for-3. Spurlin allowed seven runs (five earned) on four hits and struck out two in 3 1/3 innings.

Game 2: Trinity 8, Opp 5
Byrd led off the second game with a double and scored on a groundout by Ashe in the first. Pierce reached on an error, but a double play kept the score 1-0. Trinity was poised to score in the second with opening singles until Opp returned the favor. Tanner Hall induced a double play, and neither side scored in the third. Easterling doubled the lead to 2-0 with a home run in the fourth. Walsh and Gafford kept the bottom of the frame going but were both stranded after a fly out.

Ashe stretched the margin to 3-0 with an RBI double in the fifth. The Bobcats roared back with a three-spot and evened the contest at 3-3. Burlison lined a single and scored on an RBI double by Davis. Pierce ripped a two-run double and scored Jacobs and Davis. The Wildcats cashed in a pair of one-out RBI singles from Rascoli and Jenkins for a 5-3 lead in the top of the sixth. Spurlin took a walk in the bottom half but could not advance.

TPS widened the mark to 8-3 in the top of the seventh when Jenkins scored Easterling and Lieux on a two-out RBI single. OHS loaded the bases with no outs on a pair of singles and a defensive miscue. Following a double play, Davis scored on a wild pitch, and Gafford trimmed the gap to 8-5 with an RBI single. A pitch hit Zavier Phillips, but a fly out ended the game and wrapped up a historic season.

Pierce and Walsh had 2-for-4 showings in the loss, as Davis went 1-for-4. Tanner Hall threw 4 2/3 innings and allowed three runs on eight hits with a strikeout.