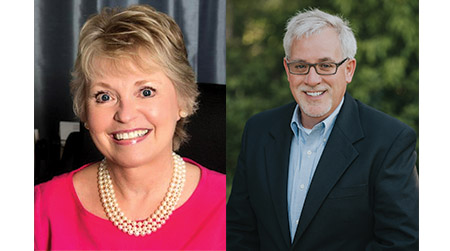 LEFT: LBWCC will welcome Opp native Rosemary Elebash as the keynote speaker for the 2022 graduation ceremonies to be held May 13. RIGHT: Andalusia resident Charles “Tripp” Bass will be honored as this year’s Outstanding Alumnus. (SUBMITTED PHOTOS)

Ahead of its commencement ceremony, LBW Community College has named its guest speaker and the recipient of its Outstanding Alumnus Award.

The college will welcome Opp native Rosemary Elebash as the keynote speaker for the 2022 graduation ceremonies to be held May 13. Andalusia resident Charles “Tripp” Bass will be honored as this year’s Outstanding Alumnus.

Elebash to Serve as Guest Speaker
“Mrs. Elebash currently serves as the state director for the National Federation of Independent Business-Alabama,” said LBW President Dr. Brock Kelley. “She has served the State of Alabama in various roles, and it will be an honor to host her for graduation.”

She was appointed as state director of NFIB/Alabama in January 2003 and represents NFIB’s Alabama members as the public policy advocate. Prior to the NFIB appointment, she was state director of law and government affairs for AT&T overseeing legislative and regulatory affairs in Alabama and Mississippi.

She has experience serving as the Alabama private sector chair for the American Legislative Exchange Council, past chairman and current board member of the Baptist Hospital South Advisory Board, Alabama Council of Association Executives Board, and Treasurer of the Alabama Civil Justice Reform Committee.

“Mrs. Elebash has been instrumental in developing pathways for Alabama Community Colleges to train individuals around the state for occupations and careers where training is difficult to obtain,” Kelley said.

“With her help and guidance, LBW and our sister colleges will soon be able to meet statewide workforce needs at an accelerated pace.”

Elebash was selected by Governor Bob Riley in 2004 to serve as a member of the Unemployment Compensation Reform Committee, and in 2010, he appointed her to serve on the Coastal Recovery Commission to create a roadmap to resilience related to the oil spill on the coast.

In 2011, she was appointed to serve on the Alabama Workforce Training Council by the Chancellor of the Alabama Department of Postsecondary Education.

Governor Robert Bentley appointed her to the Governor’s College and Career Ready Task Force in 2013 where she served as the Chair of the Alabama Small Business Commission and the Small Business Advisory Committee.

During the COVID 19 pandemic, she served on the Reopen Alabama Responsibly Committee.

She was previously nominated by U.S. Senator Jeff Sessions and appointed by President George W. Bush to the National Advisory Council on Violence Against Women.

“Being able to honor an alumnus like Tripp is special for LBW,” said LBW President Dr. Brock Kelley. “Tripp has been very successful in his career but most of all he is a great ambassador for the community.”

After graduating from Andalusia High School in 1980, Bass attended LBW on a music scholarship. During his time at LBW, he performed in the LBW Ensemble, choir, and several musicals under the direction of Jerry Padgett.

“I truly had a great experience at LBW,” Bass said. “It changed the path of my life and created lifetime friendships. We are fortunate and blessed to have such a class facility that continues to expand and adjust to the changing times.”

After graduating from LBW, Bass attended Troy State University before returning to Andalusia in 1983 to join his father, Charles C. Bass, Jr., and sister, Sue Bass Wilson, in the business established by his father in 1946 – Bass Agency Real Estate.

Continually ranking as a top producer in Covington County, Bass has assisted countless families with their real estate needs, and under his co-ownership, the mini-storage portion of the business has continued to expand from an initial 40 units to over 700 units throughout Andalusia.

Bass currently serves as a deacon at the First Baptist Church of Andalusia where he leads worship with the praise band.

“We are thrilled that Tripp still feels as though LBW played a huge role in his life, and we look forward to recognizing him as a part of this year’s graduation program,” Kelley said.