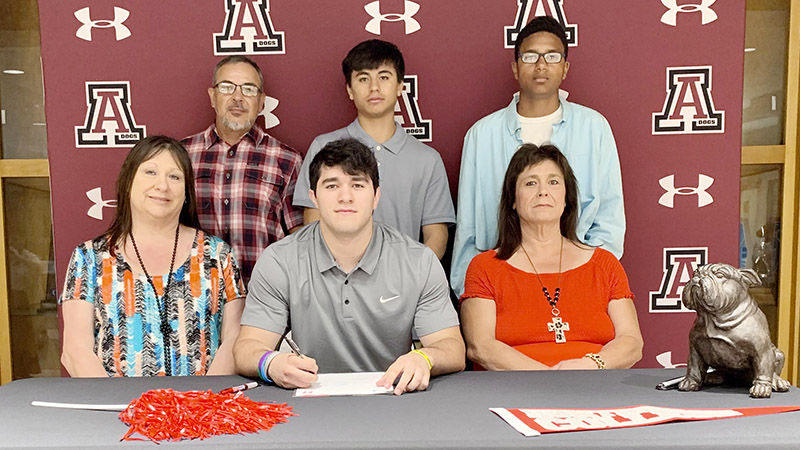 Matthew McDonald made his mother a promise at the end of football season and kept his word when he signed a non-binding standardized celebratory form with Huntingdon College Monday.

The Andalusia coaching staff supported McDonald on his signing day and thanked him for his contributions to the Bulldog football program.

“This is a dream come true to play college football. Most guys don’t have an opportunity to do that. I chose Huntingdon because they have a great program and a great coaching staff. It’s not far from home, and I’m looking forward to being a part of the Hawks family and getting to work. Having this opportunity means the world to me. I promised my mom I was playing football after high school, and I wasn’t going to break that promise,” McDonald said.

Huntingdon College competes in the NCAA Division III as a member of the USA South Athletic Conference. The Hawks enter the 2022 season as the defending conference champions with an 8-3 overall record. HC had an 8-0 conference record last year and ended the season with a first-round loss at Birmingham Southern.

While he is looking forward to competing at the next level, McDonald added that he would not forget his high school playing days. 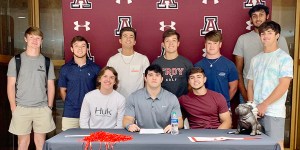 McDonald was thankful to have his friends attend his signing day.

“I’m going to miss the culture of Andalusia and the way things are set. I learned how to be a young man, how to deal with adversity, and how to handle things the right way. My biggest highlight was when I had to make the switch to offense my senior year before the playoffs to help better my team.”

McDonald recorded 61 tackles (31 solo, 22 assist, 8 for loss) as a linebacker for the Bulldogs and added two QB hurries with an interception in 2021.

“I’m very excited for Matthew. He played linebacker the entire year and because of an injury going into the playoffs, we moved him to the offensive side of the ball. He was a really good linebacker for us who knew somebody had to play the H-back position. He never complained about it and did everything we asked him to do. I told one of his coaches that wherever you put him, he is going to give you his utmost best and will be successful at it. He attacked the weight room every day from the time he was a ninth-grader, and it paid off for him. He is going to a great program. Any kid who goes to play D3 football really loves the game, and that was obvious by how he played for us. Matthew is a very soft-spoken young man and one his teammates thought a lot of,” AHS Head Football Coach Trent Taylor said. 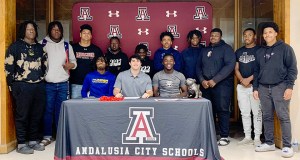 McDonald, who received support from many classmates, is excited to take his talents to Huntingdon College and become a member of the Hawks football team.

McDonald started playing football at the age of five and credited his loved ones for helping him reach this point.

“My mother is the biggest influence in my life. She always cared about me, and part of the reason I play the game is because she cares about the sport just as much as me. The support from my family and friends is huge. It stood out to me because I could hit somebody without getting in trouble. I couldn’t have done it without my friends, especially working out with Mason Taylor and Mike Hourel late nights and early mornings,” he said.

He is the son of Rod and Elizabeth McDonald with a younger brother, Conner. He will graduate from Andalusia High School on Friday, May 20, 2022.