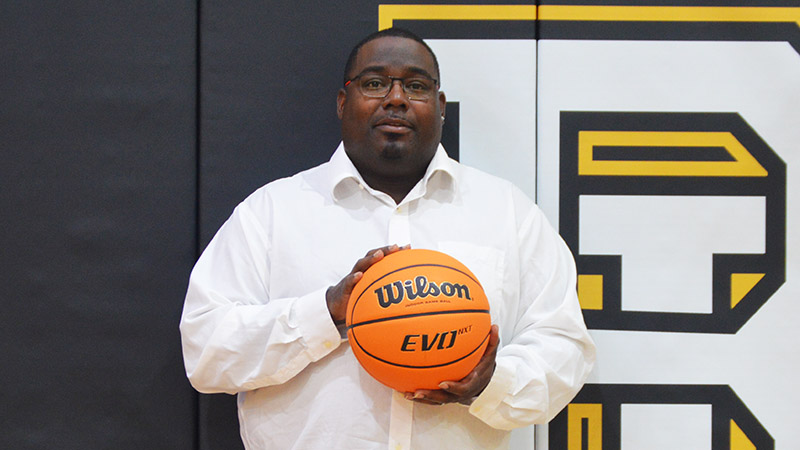 Red Level brought one of its own full circle for the school’s next basketball chapter as Dominic Williams was selected as the next head coach for both varsity teams.

“Being a coach has always been a dream of mine. I look back on my experiences with my high school. I came in shortly after the season had started last year and worked with the B-team. My leadership skills were seen by the staff, players, and fans, so it just made sense. My goal is to have an impact on the athletes’ lives, to be a role model for them, and to lead the program to a successful and exciting year. I want to give all the seniors the opportunity to reach every goal for the team and themselves. I would like to thank God, my family who continued to pray for me, and the staff at Red Level School for the opportunity,” Williams said.

He has experience in youth league football and basketball and served as the football linebackers’ coach at Monroe County High School under Marshall Locke. Williams, who played high school basketball for Red Level from 2002 until 2006 under Fred Kelley, will be a basketball head coach for the first time and also serve as an assistant football coach.

“All coaches want to see their players succeed in life and have the chance to be better individuals. Not all children have someone they can just come and talk to. I want to be that type of role model. I want to see the kids succeed because they are so talented and vibrant. It simply reminds me of my years playing basketball, and I want to further grow this program. I want to push these talented players to reach new heights that they have not reached before,” he said. “Dawn Kelley said it best: once a Tiger, always a Tiger.”

As someone who loves the sport of basketball, he has a simple message for his athletes. “I love the game. After weekend shoot-a-rounds, the kids always want to outshoot coach and quickly realize maybe he is old, but he still has it. The Coach Williams era has officially begun, and to my players, be the change.”

Williams attended a technical school and obtained his CDL before taking a job as a quality control inspector. He is married to his wife Lisa of nearly 15 years, and they have three children: Dominic Jr., 16; Amaya, 14; and Kennedi, 8.

“We are thrilled to announce Dominic Williams will assume responsibilities as Red Level’s head coach for the varsity boys and girls,” Principal Randy McGlaun said. “As a 2006 graduate of Red Level School, RLS has always held a special place in Dominic’s heart. He has a long history coaching and mentoring our students at many levels and continues to have a positive impact on our students’ lives. He brings a passion for the school’s athletics and our students. He will continue to teach the fundamentals of the game and help our students be leaders on and off the court. His work ethic, energy, leadership, and loyalty to our school will make him a wonderful addition to our staff.”