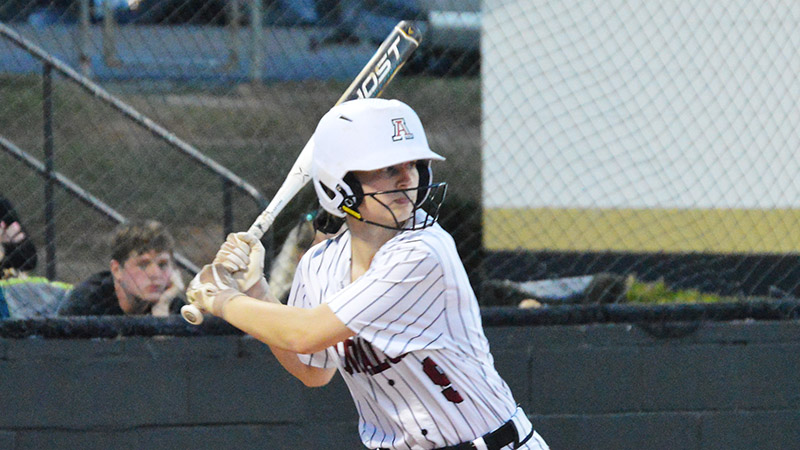 Four teams from Covington County traveled to Gulf Shores for the south regional softball tournament. All four of the county teams’ seasons ended in the double-elimination tournament.

Andalusia High School
Andalusia finished the 5A South Regional Wednesday, May 11 and Thursday, May 12 with a 3-2 record. AHS soared past LeFlore, 21-0, in the regional opener but fell short to Rehobeth, 3-1, in the next game. Maggie Furr was the winning pitcher with three innings of one-hit ball against LHS. Amanda Majors and Taya Newton each went 1-for-1 with two runs scored and three RBIs. Olivia Cravey threw six strong innings and allowed only two hits on three unearned runs to Rehobeth.

The Lady Bulldogs then shut out Carroll, 10-0, and held off area foe Charles Henderson, 5-4, but fell to RHS a second time, 7-1, in three elimination games Thursday. Furr threw a no-hitter Thursday in five innings, while Ashlee Findley was 3-for-4 with two runs scored and an RBI against CHS. Kailey Jackson earned the win with 4 1/3 innings pitched against CHHS, and Majors was 2-for-2. Newton finished 1-for-3 with a run scored and an RBI in the final game.

Andalusia ended the season with a 33-20 overall record.

Stats were contributed for this report.

Opp High School
Opp finished the 3A South Regional Tuesday, May 10 and Wednesday, May 11 with a 3-2 record. OHS opened the regional with an 18-0 rout of Cottage Hill. Caroline Courson was the winning pitcher with a complete-game no-hitter and struck out seven. Amaya Womack went 2-for-2 with a single, triple, two RBIs, and three runs scored. Jaidyn Ivey was 1-for-2 with a single, three RBIs, and three runs scored. Reese Cauley finished 1-for-3 with a double, two RBIs, and two runs scored.

The Lady Bobcats fell in their next game to Houston Academy, 9-4, as the Raiders rallied with a big sixth inning. Addison Moseley went 3-for-4 with two singles, a triple, RBI, and two runs scored. Opp then defeated Flomaton, 7-3, and Wicksburg, 10-4, but fell to HA a second time, 10-8, in three elimination games Wednesday. The Lady Raiders once again rallied in the sixth inning. Cauley was the winning pitcher against FHS and WHS.

OHS ended the season with a 31-11 overall record.

Tripp Norris contributed to this report.

Pleasant Home School
Pleasant Home finished the 1A South Regional Thursday, May 12 and Friday, May 13 with a 1-2 record. After opening the regional with a 1-0 loss to Red Level, the Lady Eagles blitzed Fruitdale, 13-2, but were eliminated by Sweet Water, 10-0, on Friday.

No stats were available.

Red Level School
Red Level finished the 1A South Regional Thursday, May 12 and Friday, May 13 with a 2-2 record. RLS opened the regional with a 1-0 win over Pleasant Home. Elizabeth Cross was the winning pitcher and struck out 16 batters in the game. Amaya Williams had an RBI double. The Lady Tigers then knocked off Millry 4-3 in 10 innings in their second game of the day. Cross led off the bottom of the 10th with a triple and scored the game-winning run on a bunt by Kayden Lord.

The Lady Tigers ended the season with a 20-15-1 overall record.