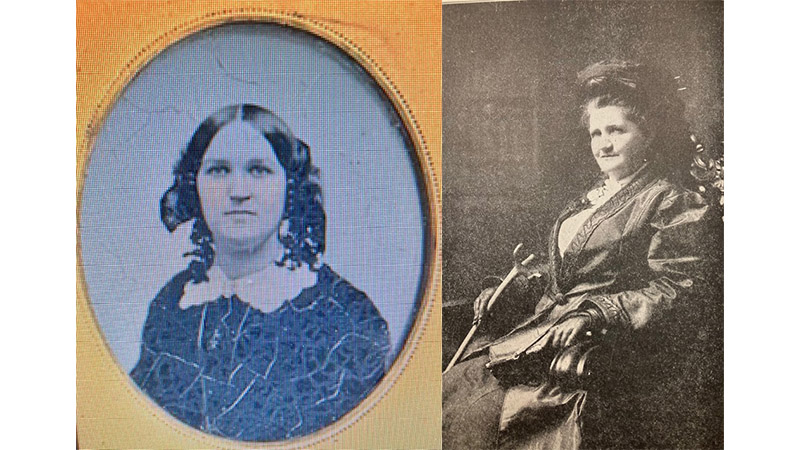 Julia Tutwiler in her youth, left, and at middle age.

An elementary school book, “History Stories of Alabama,” by Mrs. Pitt Lamar Matthews was passed along to me recently. It is dated 1929 and the “FOREWORD” reads, “To the Boys and Girls of Alabama – The stories in this book that you will like best are the stories of Indians and those about the first white settlers who came to Alabama. Many of these stories are legendary. I found them in an important book (for grownups) called Pickett’s History of Alabama. I also gathered facts and narratives for these stories from various books, old histories, and from newspapers. After searching for more than a year for stories of heroes, daring deeds, adventures, and worth-while happenings in the history of our state, I came to feel that Alabama’s history is so filled with glorious deeds, magnificent sacrifices, thrills and heart-throbs, that the children of the state should be told what great men and women their forebears were. The future of Alabama depends upon the boys and girls who are now in school. I hope that in your hearts you each feel like saying with Miss Julia Tutwiler (who wrote the words of our state song),’Keep up worthy, God in Heaven, of this goodly land of thine.’ In every epoch of history, you can rest assured that your state has done its part nobly.”

The contents in this little history book includes simple stories such as DeSoto’s Visit to Alabama, The Red Eagle, Alabama’s Capitals, The Heroine of Little River, The First Railroad in Alabama, The Man Who Could Make Cow Bells, The Birth of Birmingham, the Pittsburg of the South, William Crawford Gorgas, The Founding of Florence, The Legend of Muscle Shoals, Alabama’s ‘Fighting Fourth’ (World War I), and The Story of Miss Julia Tutwiler, just to name only a few.

The name of the owner of this book written on the inside flap is Inez Riley, 4th grade. A pencil message is inscribed, “Don’t forget to bring 10 cents for the puppet show.”

Let me share with you readers my favorite story from this little collection of Alabama history. These stories were all told in the eyes of a 4th grader which is the grade most Alabama schools traditionally teach Alabama history. This is actually the grade I became interested in history when our textbook back around 1955 or 56 was “Singing Wheels” and the stories were about pioneers and covered wagons. In my imagination, I could just picture myself with a bonnet on my head and sitting in a covered wagon.

“The author of our Alabama state song is a famous Alabama woman, Miss Julia S. Tutwiler. It is interesting to know about the things that she did which made her known and loved, not only in Alabama but throughout the country.”

“Miss Tutwiler attended many schools in order to prepare herself for teaching. Her father, Henry Tutwiler, founded a school in pioneer days for plantation boys, the Green Springs Academy near Greensboro, but he allowed some girls including Julia and her sister to attend classes with the boys. She furthered her education at colleges in Philadelphia, New York, and Virginia. Afterward she spent several years in Germany studying the newest teaching techniques along with special studies of languages such as German, French, and Greek, but eventually returned to Alabama to begin teaching.”

“Her best work as a teacher was when she became president of a teachers’ college in Livingston (now the University of West Alabama) where she served for 25 years. Girls were not allowed to attend the state universities at the time, but she used her influence to have the doors of the colleges at Tuscaloosa and Auburn opened to them. Today, many girls go to college at these schools.”

“Miss Tutwiler also did valuable work among the prisoners in the state. She believed that in many cases prisoners were mistreated so she went about from prison to road camps to mines where convicts were kept and gave religious instruction. She also assisted Booker T. Washington at Tuskegee Institute in establishing a boys’ reform school. Together they wrote letters to legislators and had an important part in changes that were made. She became known as ‘The Angel of the Prisons.’”

“The Alabama State Song was not the only poem written by Miss Tutwiler. Her poems and other writings appeared in papers and magazines in this country and in England.”

“Miss Tutwiler devoted her life to the upbuilding of Alabama. Her portrait today hangs in the Capitol of our state. It is fitting that this honor should be shown to one who loved and served the state so well.”

“Today nearly every boy and girl in the state may attend a school where his heart, mind, and body can be trained toward useful citizenship.”

Thanks to the State Department of Archives and History in Montgomery for today’s “live streaming” of their 2022 Lunchtime Lecture Series presented by Dr. Paul M. Pruitt, Jr., University of Alabama law professor, whose topic was “The Education of Julia Tutwiler.”

Many thanks as well to Alice Boles Childree who brought me this little vintage elementary school history book with these stories so poignantly intended for children of the 1920s and 1930s.

For more information on Miss Julia Tutwiler and The Alabama State Song, search the internet for this website – www.savethealabamastatesong.org