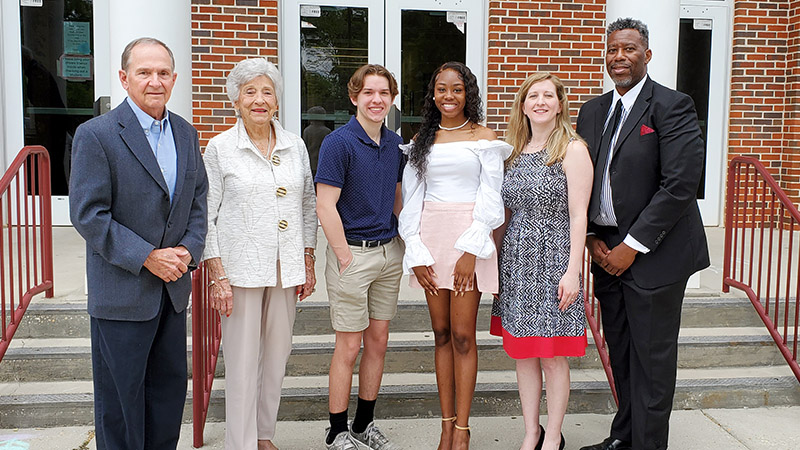 Soniyah Chambers, daughter of Talecia Chambers, and Cooper Taylor, son of Lance and Monica Taylor, were formally recognized and presented the honor at the culmination of the annual board meeting held on April 30 in the Andalusia Junior High School Library.

Chambers will be the first in her family to attend college, and she plans to pursue a career as a speech pathologist.

In the fall of 2021, she participated in the senior day activities at Alabama A&M University.  During the visit coordinated by fellow AHS alum, Ms. Michele Robertson, she fell in love with the Alabama A&M campus, “The Hill,” and its rich history. Her desire to want to make a difference in the lives of others by helping enhance their speech and communications skills had a huge impact in leading her to want to pursue a degree in Communicative Science and Disorders.

Chambers has been a volunteer at Andalusia Elementary School (2018 to 2020); was a tutor for her peers at Andalusia High School; volunteered in the organization Students Against Opioids where she created encouraging Facebook and Instagram posts to spread helpful information about opioid addiction.

She has also volunteered with Meredith Miracles since 2018 and with the South Central Alabama Mental Health Center where she prepared bags for students in county schools to help spread awareness of the signs and behaviors associated with mental health issues.

Chambers’ accomplishments at Andalusia High School are also noteworthy.  In addition to being selected as class secretary (2018, 2019, and 2021), she has been an attendant on the Homecoming Court as both a junior and a senior.  She is also a Daughters Of American Revolution Good Citizen, a member of the National Honor Society, and the Andalusia High School Cheer Co-Captain.

While attending Andalusia High School, Taylor was selected class treasurer (2018, 2019, 2020, and 2021) as well as SGA treasurer during his senior year.  He served as junior editor for the Memolusia School Yearbook (2019-2020) and later became editor-in-chief of The Memolusia for the 2021 school year.  He also was vice-president of the Future Business Leaders of America (FBLA).  He is a member of the National Honor Society, has been a Peer Helper and a member of the Broadcasting team for the past three years. In addition, he has been a member of both the Usher Club and Spanish Club since 2020 and has been an Andalusia City Youth Ambassador for the past two years.  His all-around efforts led to his selection as the Andalusia Area Chamber of Commerce’s “Student of the Year” this year.

Cooper has also volunteered for the Full Tummy Project of Covington County, and he worked closely with the Covington Veterans Foundation to create a interactive map of the organization’s display of tribute banners.

In the fall, Taylor will become a fourth-generation Auburn University student and plans to pursue a degree in journalism with the sports production option with a long-term goal of working with Auburn University Athletics.  He has already gained valuable experience on the sidelines working as a partner and lead videographer for Pure Game Sports broadcasting the Andalusia High School football games and streaming them via a NFHS Network.

Annually, the Foundation selects a graduating AHS senior to receive a renewable scholarship ($5,000 annually over four years to total $20,000).  Recipients are chosen based upon the criteria of financial need, scholastic merit and achievement, and civic/community involvement.

Both Chambers and Taylor are also eligible for the AHSSF International Study Scholarship awarded annually to Andalusia High School graduates who are currently pursuing undergraduate college degrees and desire to participate in a university-based summer study abroad program. These scholarships provide tuition, travel, and living expenses for a four- to six-week program at historic institutions abroad, to include the University of Cambridge in England.