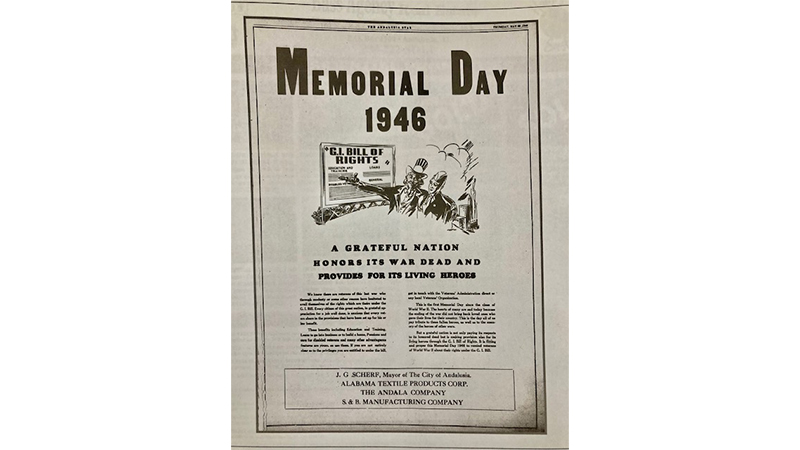 A number of old war movies aired on the classic movie tv channel over the Memorial Day weekend. Thinking of America and Andalusia in particular regarding the end of World War II, it was enticing to look back at newspapers of the time, Memorial Day 1946, to see what was going on in our fair city and county as the citizens began recovering from the effects of the war.

An advertisement appeared in the May 30, 1946 Andalusia Star – Sponsored by J. G. Scherf, City of Andalusia Mayor,in conjunction with the Alatex, the Andala, and S & B (Scherf & Barnes) Manufacturing Company.

Many women worked in the textile mills during the war and filled the jobs of men off serving in the war. Several panoramic photographs of these ladies are on display at the Three Notch Museum. Visitors to the museum that had relatives who worked at the shirt factories during those war years always enjoy identifying the people when they spot those pictures. The only men in the pictures are usually older men too old to have gone off to the war or men turned down for military service for one reason or another.

“This is the first Memorial Day since the close of WWII. The hearts of many are sad today because the ending of the war did not bring back loved ones who gave their lives for their country. This is the day all of us pay tribute to these fallen heroes as well as to the memory of the heroes of other wars.”

May 30, 1946 – The Andalusia Star – “News has come to this newspaper of a new and rapidly growing organization in Covington County. The Veterans of World War II in this county have decided that it is time for them to have an active voice in selecting our public officials and charting their policies on government within our county, state, and country. The purpose of this organization is to foster and promote good clean and competent government both now and in the future.”

“These are the men who answered the call and performed the greatest task the world has ever known. Our city and county need forceful, aggressive young leadership and from these men, it should and must come.”

In early June, J. E. “Big Jim” Folsom won the Democratic gubernatorial nomination in the run-off Primary by an overwhelming majority with an unofficial tabulation of Folsom 197,306 statewide votes to 140,541 votes for Lieut. Governor Handy Ellis. Actually Ellis won the vote in Covington with Ellis receiving 3,35l votes to Folsom’s 2,429. The Veterans of World War II organization who decided that their group did not accept the short service record of Folsom had endorsed Ellis. They furthermore publicized that they did not want a “clown or a showman” elected governor! (Hmmm – Yes “Big Jim” was a colorful character and popular candidate! “Hail, Hail, the gang’s all here for the Alabama Jubilee!”)

May 16, 1946 – “The American Legion is observing ‘I AM AN AMERICAN DAY’ on Sunday, May 19. More than two and one-half million young men and women in the U.S. reach voting age each year. It is important that all young citizens be fully acquainted with the rights, privileges, and responsibilities of citizenship. The American Legion recommends to all citizens and especially to its young citizens that they pledge themselves anew to the principles set out in ‘The American Creed.’”

May 23, 1946 – “SATURDAY IS POPPY DAY IN ANDALUSIA – Poppy Day will be observed in Andalusia and throughout the United States this Saturday. Memorial poppies will be worn in honor of the dead of both world wars and will be distributed on the streets throughout the day by volunteer workers from the Legion Auxiliary. Extensive preparations for Poppy Day are being made by the Legion Auxiliary under the direction of Mrs. G. G. Dunn, Poppy Chairman. The poppies are crepe paper replicas of the European wild poppy (red) which bloomed on the battlefields of France and Belgium in both wars and which has become a world-wide symbol of remembrance of America’s battle dead. ‘With peace restored and the men coming home,’ Mrs. Dunn said, ‘everyone will want to pay tribute to those who can never come back to us by wearing a poppy in their honor on Poppy Day.’ Contributions received in exchange for the flowers will be used in relief and rehabilitation work for disabled veterans, their families, and the families of the dead.”

May 23, 1946 – “Father’s Day, June 16, will be dedicated to American veterans who have made possible the first peacetime observance of the day in five years.”

June 6, 1946 – “Veterans are reminded that June 30 is the last day that they can re-enlist and be sure of their old rank and family allowance. This applies to men who were discharged on or after May 12, 1945. Stop by the Recruiting Office in the Court House in Andalusia and find out just what the Army has to offer you to re-enlist.”

June 6, 1946 – “Miss Ella Reid is spending some time with her parents, Judge and Mrs. Robert S. Reid. Miss Reid has spent the last 10 months with a USO show that has traveled throughout the Mediterranean Area in the European Theater of operations.”

My mother’s high school classmate Ella Reid was a talented pianist and “could play anything” according to my mother. She joined the USO to perform for the troops overseas. I do not know of another Andalusian who did this. Somewhere in my WWII mementoes, I have one of those plastic records recorded by Ella Reid and sent home to her friends. It is cracked now and cannot be played to my dismay, but it is a keepsake (if I could find it).

June 13, 1946 – “The Army and Navy will begin at once to address next of kin of completely identified dead to obtain instructions of disposition of the bodies and remains. The War Department urges that next of kin to await receipt of inquiry. “

June 20, 1946 – “U. S. IS NOW A NATION IN WAITING – Our lives today are occupied mostly with waiting. We’re on the waiting list for a house that is waiting on lumber. Sonny’s name is on the list for a tricycle. Sister is waiting for a camera. Dad is waiting for a car. Mama is waiting for a washing machine, an electric toaster, and a pair of stockings. Bud is waiting until a university can find a place for him so he can utilize the G. I. Bill. The engaged couple down the street are waiting on marriage – waiting until they can find a place to set up housekeeping. The butcher is waiting for meat – meanwhile he fills his showcase with sliced baloney so that it won’t quite look so bare. The professional man just out of service is waiting for office space. Nearly every man is looking for a suit of clothes that isn’t made yet because it is waiting for a lining. We’re waiting to take that vacation until we can get new tires for the old car. We’re all waiting for different things and yet for the same thing – that beautiful post-war world they promised us. And by golly, we are getting pretty tired of waiting. A COUNTRY IN WAITING – THAT’S US!”

June 20, 1946 – “From all indications, the people of Covington County are in for a big treat on the Fourth of July. The local post of the Veterans of Foreign Wars has completed plans for one of the biggest fourths ever held in this section of the state. They have secured plenty of beef, pork, and lamb to put on a big feed for the crowd expected.”

“There will be a bathing beauty contest open to all single girls in the county and the winner will be crowned queen. A band has been engaged, and a platform is being constructed for all who want to dance. A baseball game between the Andalusia and Opp Semi-Pros at Open Pond will be played. All kinds of contests for children of all ages will be held. Soft drinks, ice cream, and sandwiches will be available all day. Bus schedules will run from Andalusia during the morning and back in the afternoon for those that need transportation. A big time will be had by all on the Fourth of July at Open Pond. Advance tickets can be bought. Don’t forget, the public is invited.”

I am sure that there are some citizens living who Remember When the first Memorial Day after World War II occurred. It is good to look back to understand the new beginning of grateful citizens who worked together right after the war to help make our town and our county what it is today.