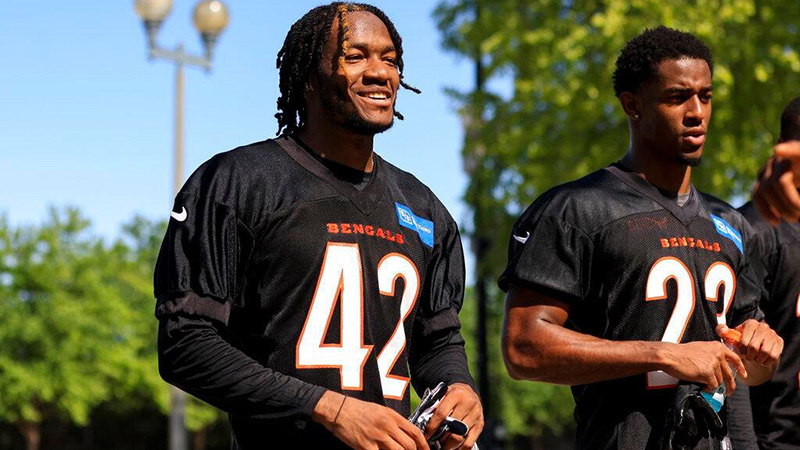 Allan George, left, graduated from Andalusia High School in 2017 and went on to play football at Vanderbilt. He has now joined the NFL’s Cincinnati Bengals. (PHOTO PROVIDED)

Allan George first started playing football as a sophomore in high school and is now set to take on the professional stage with the National Football League’s Cincinnati Bengals.

“Honestly, this is an opportunity I couldn’t have imagined. Growing up in a small town like Andalusia, it isn’t really common for us to get our names out there as much as these big cities. The things this opportunity can provide for my family and me for our future are extremely vast, and I’m just grateful to be in this situation. I’m extremely appreciative to the Cincinnati Bengals and will forever be indebted to this organization. They are giving me a platform and are the first organization to fully believe in me as an NFL player,” George said. “This couldn’t be a better situation, and I love coming to work with these guys every day.”

He said his favorite aspect of playing football is the competition. “Once you get to this level, everyone is a high-level competitor. The challenge really comes with being the ultimate competitor, and in my eyes, the ultimate competitor tries to do their best regardless of the circumstances around them. You have to outwork what you did yesterday.”

George feels his past experiences taught him a lot about teamwork.

“I’ve seen winning and losing at the greatest lengths. Teamwork and communication can either make or break an organization, team, relationship, or friend group. It’s extremely critical,” he said.

Current NFL players he looks up to include Marshon Lattimore, Tre Herndon, and Casey Hayward Jr.

“Marshon is vicious, and I feel like I try to model my mental approach to the game after his the most. Tre also went undrafted and found his way into the league the exact same way I did. Ever since I arrived at Vanderbilt in 2017, he has been a mentor and someone I always ask for advice. Casey’s mental approach and play style are both elite, but he also graduated and played at Vanderbilt. He became a mentor for me in 2019, and ever since then, I’m thankful for him the most.”

George added that playing for Vanderbilt in college helped him prepare for the NFL. “I played against the best of the best every day. I played against top tier talent in the Southeastern Conference, whether I wanted to or not. Every practice is like an all-star game and makes you get better. You’re forced to adapt to your environment. That’s the way the NFL works. Everyone here is great at what they do. That’s why we’re all professionals.”

He looks forward to being around the other professional players in the league.

“I have played with them on video games before and have dreamed of meeting them. To be able to play beside and against them is insane and all surreal,” George said.

He is slotted to play cornerback for the Bengals but said he was open to change and would play whatever position is needed.

“My coaches all gave me several lessons and helped me. They have made me a better man and player throughout my life. I’ve truly been blessed with the array of coaches I’ve had a chance to learn from over time.”

He is the son of Angela George and Daryl George of Andalusia and has two siblings, Daryl George II and Adrianna George. He married his wife, Katlyn, in the summer of 2021.

“My friends and wife have been my biggest influences. My friends have been with me for the longest and will never leave my side. There’s a core group of guys from Andalusia and Straughn who I will always carry with me and communicate with daily. All 13 of us in the friend group push each other to grow every day in every avenue of life. My wife helped me realize my potential and helped me want to be better, not just for myself, but for our entire family,” he said. “It means the world to me to be supported by my friends and family. To also have the city behind you is a blessing. I’m doing this not only for me but also for all the people in my corner.”

Cincinnati finished the 2021 season as the American Football Conference Champions and fell short to the Los Angeles Rams in Super Bowl LVI, 23-20. The Bengals were 13-8 last year and will begin the 2022 season on Sunday, Sept. 11, at home against the Pittsburgh Steelers.

George offers advice to those who have big goals for their life.

“Just don’t give up on your dreams. If you’ve been doing something for a good minute and aren’t seeing the results you thought you were going to see, then make a change with your approach and keep going. You never know how close you are to breaking the glass ceiling placed on you and you don’t have to always follow the norm,” George said.