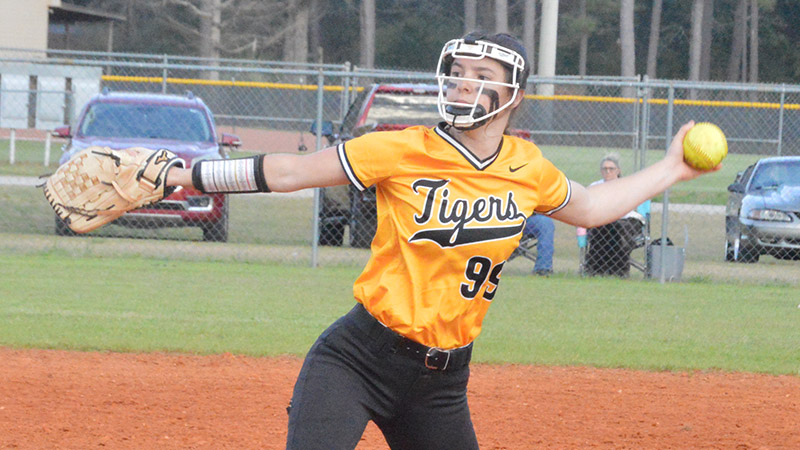 Red Level rising senior Elizabeth Cross pitches for the Lady Tigers in a game this season. She was named one of 18 South All-Stars and will compete in the North-South All-Star Game as part of the AHSAA’s All-Star Sports Week in July. (PHOTO BY ZACK MAIO)

Red Level School rising senior Elizabeth Cross is among 36 softball athletes from across the state chosen to compete in this summer’s AHSAA North-South All-Star Games.

The games will take place during the AHSAA’s annual All-Star Sports Week from July 18-22.

Cross, who was selected as a shortstop for the South All-Stars, also pitches for Red Level. She is just the second softball player from RLS to be selected to play in this event and the school’s first since switching to the fast-pitch format.

“Being selected for the AHSAA All-Star team is an honor. It has been something I have worked hard to achieve. I am very honored to have been chosen. It is a dream come true that proves hard work and dedication does pay off. I would encourage all the younger players to set your goals high and work hard to achieve them, never give up on your dreams. This would never have been possible without God, my family, friends, and coaches who have encouraged me that I could achieve anything. The opportunity to make new friends and play with girls I have grown up playing travel ball with means a lot to me,” Cross said. “I am looking forward to meeting and playing with new players from all parts of the state.”

Teams are comprised of 2023 rising seniors and were chosen by the Softball Coaches Committee, which is made up of representatives from each of the state’s eight districts. The players were selected from nominations received from AHSAA member school coaches.

“Lizzy is a really special player who pushes herself and works hard all the time to try to be the best. Her having the highest batting average in the state is a telling sign of the work she has put in. Being selected to the All-Star Game is a great honor as only 18 juniors from the entire state get selected for the South. For her to be one of them speaks volumes to the kind of player she is. We will be there cheering her on and knowing that she will represent Red Level very well,” RLS Head Coach Dusty Lee said.

Cross finished with a batting average of .656 as a junior for the Red Level Lady Tigers in the 2022 season.

The North All-Stars swept last year’s doubleheader against the South All-Stars. The North leads the series 27-23-3 heading into the 2022 competition. The series was first played in 1997.