On behalf of the Wellborn family, it is with deepest sorrow that I inform you of the passing of my Grandmother, Betty Louise Clark Wellborn. Betty was born on Feb. 20, 1927 and died on May 26, 2022, at the age of 95. She suffered a hip fracture while cutting flowers in her yard, and was unable to recover. Betty was born and raised in Lexington, Kentucky, and later married the boy next door, Johnson “Jack” Powell Wellborn Jr. Betty and Jack lived in many states, including Florida where they built and lived aboard a wooden sailboat for many years. 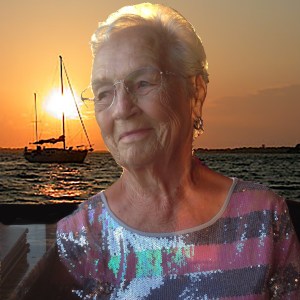 Betty and Jack relocated to Dixie, Alabama in 1979, on 14 acres adjacent to the Conecuh National Forest. She was a member of the Dixie Community Church. Betty worked as a banking officer for First National Bank of Brewton, until she retired. After Jack’s death in 2008, Betty settled in Dunedin, Florida with her daughter, Rebecca Wellborn, and was joined by her son Johnson “Beau” Powell Wellborn III in 2019. Betty traveled extensively and made wonderful friends while living with her children. She passed peacefully at home, with them by her side, after suffering a hip fracture while picking flowers.

Betty was preceded in death by her husband, Jack, 11th Airborne Division infantry and 101st Airborne Division paratrooper, and daughter Elizabeth Victoria Wellborn. She is survived by her daughter, Rebecca, of Dunedin Florida, her son Beau, of Dunedin; her granddaughter, Whitney Wellborn Geohagan (Mark) of Andalusia; and two great-granddaughters Sophie and Marlee Kate, of Andalusia. A Celebration of Life will be held June 29 in Dunedin.

From the beginning of time, we as humans have celebrated the life of loved ones in the form of a funeral. Obituaries are a way we announce the death and sum up the accomplishments of the deceased one. It would be irrational to believe that all of Betty’s accomplishments could be summed up in one article. She had many roles in life; daughter, sister, cousin, mother, grandmother, bank manager, first mate, biography consumer, gardener, and lover of all things Kentucky. As a result, there would be too many requests for guest contributors. Betty made an impression on everyone she encountered, and because she was who she was, she tended to these relationships. She tended to her relationships as she tended to her flower gardens, carefully, consistently, and unconditionally.

Betty had a love for all things classically beautiful: the ocean, a hand-written card, pearls, and a well-set table. She had the ability to make small moments full of magic. My forever goal is to acquire enough grace to make others feel the same way my grandmother allowed me to feel. In remembrance of Betty, take a moment today to send someone a handwritten reminder of how important they are.