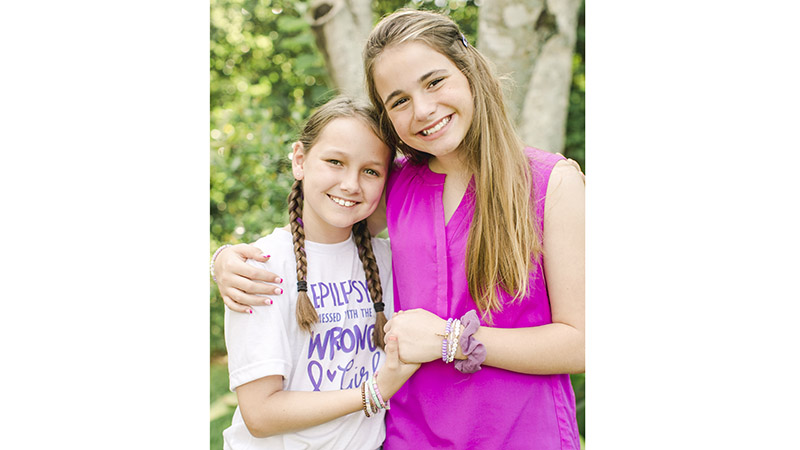 Marlee Kate Geohagan, left, is grateful to have her friend Mary Katherine O’Neal help her with medical expenses for her epilepsy through O’Neal’s bracelet-making business, Serve Jewelry Company. O’Neal is 11 years and the daughter of Hoyt O’Neal and Leigh-Anne O’Ferrell. Geohagan, 10, is the daughter of Mark and Whitney Geohagan. (PHOTO COURTESY OF LEIGH-ANNE O'FERRELL)

Mary Katherine O’Neal is only 11 years old but already in the business world and helping one of her closest friends at the same time.

Mary Kate has been designing bracelets through her own business called Serve Jewelry Company. She started making the bracelets in December and then started her business in January. When she found out her friend Marlee Kate Geohagan was going to have brain surgery due to epilepsy, she chose to make special bracelets in honor of epilepsy awareness.

“I wanted to do this for one of my closest friends because I know she has been through so much with epilepsy. My business name is Serve Jewelry, and I wanted to serve. This follows along with my business model. God calls us to love our neighbor as ourselves, and I felt really called to help my friends,” Mary Kate said.

Mary Kate has made over 60 bracelets so far. She has donated all the proceeds to Marlee Kate’s family to help offset the cost of hotels, gas, food, and all hospital-related costs.

“My daughter found out her friend was to undergo brain surgery because she has a medicine-resistant form of epilepsy. MK made special bracelets and has made well over $500. She donated the proceeds to Marlee Kate, who also goes by MK to help with her hospital stay,” mother Leigh-Anne O’Ferrell said.

“At four months old, Marlee Kate experienced her first major seizure and was life-flighted to Sacred Heart in Pensacola, Florida. For eight years, neurologists tried to treat her with many failed medications. Two years ago, Marlee’s parents moved her to Children’s of Alabama. With the help of exceptional doctors, Marlee was diagnosed with medicine-resistant epilepsy.”

O’Ferrell added that Marlee Kate is on multiple medications and still seizes about four times an hour.

“Her seizures are atypical and include staring, confusion, and zero recollection of the time lost. The recent surgery pinpointed Marlee’s hot spots on her brain. She has one on her frontal lobe, which is connected to language, and one on her left temporal lobe, which is connected to memory. The right side of her brain is untouched, and you can ask her any math problem.”

Doctors are hoping to do a second surgery called a focal resection after Marlee’s brain heals. “The goal is to move the damaged portion of her brain. This is the best chance of Marlee being able to live an independent life. Her current goal is to begin competition cheer again,” she said.

The community has shown a large amount of support for Marlee and her family.

“They have been overwhelmed by all the support they have received. She loves to share her story and even volunteered her time at the hospital helping researchers collect data concerning the effects of seizures on language. Marlee Kate has been extremely touched by my daughter’s amazing act of kindness.”

For more information or to contribute contact Mary Kate through her Instagram at serve_jewelry or call Leigh-Anne O’Ferrell at 334-488-9514.