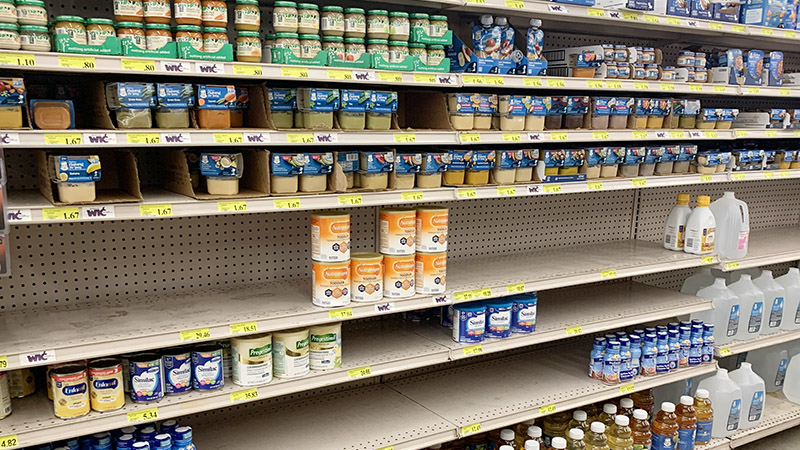 Piggly Wiggly and Pic-N-Sav are two grocery stores in Andalusia currently being impacted by the baby formula shortage across the country. Piggly Wiggly has set limitations on its formula, while Pic-N-Sav has pulled the item from its shelves.

Mothers and caregivers are seeing a sweeping shortage of baby formula and other essential items across the country, and two grocery stores in Andalusia are seeing an impact.

Piggly Wiggly has removed almost all its baby formula from shelves and has set a limit on the products in stock.

“Throughout the whole country, we are seeing baby food shortages and also certain formula shortages. The shortage in our store and others is due to supply and demand. When there is a shortage in one, doctors have been switching formulas to others, which have a similarity to it and allow the kids to take,” Piggly Wiggly Manager Chantz Robertson said.

Robertson added that the shortage also has to do with the amount of the products received.

“We are getting formula but just not as much as we want. They are limiting us on our orders. It’s not that we aren’t trying to get the formula, but it goes back to the supply and demand.”

Piggly Wiggly is limiting baby formula to one per family to help families have the opportunity to purchase it, as well as to keep others from taking advantage of the situation.

“We hope to keep a rolling inventory. By allowing one per family, we are able to provide our community with the baby formula they need. We had one episode when someone came in and bought an entire case of it. Within an hour, we saw it on the marketplace for sale at triple the price. That’s just not the right thing to do right now. We want to ensure our community gets what they need and nobody is taken advantage of,” he said.

Robertson stated he had received reports of four cans of formula designed for kids who have stomach issues selling for $400. “That’s just not cool when people buy formula and take advantage of others, which hurts others. We hope this limit helps our customers and the community realizes why it has been set.”

At Pic-N-Sav, the store is mostly dealing with a shortage of Enfamil baby formula due to a nationwide recall.

“We have had to get everything off the shelf that would be harmful and contaminant to the young children. Until the current recall is lifted, we have found it difficult to get the baby formula in our store. We have to make sure any of the ones that fall on that list are gone off the shelves and not in our customers’ hands,” said Assistant Manager Andrew Adams.

Adams added Pic-N-Sav hopes it will not have to deal with the shortage much longer.

“We should be able to get everything situated between the warehouses for improvements on getting the formula back in the store in the future. It will take some time for us to make sure everything is clear and our customers can get everything they need.”

According to the U.S. Food and Drug Administration, certain Similac, Alimentum, and EleCare products have been recalled and should not be used.

Abbott Nutrition has recalled certain powdered infant formula products produced at its Sturgis, Michigan facility. Products from that facility can be found across the U.S. and some were exported to other countries. Powdered Abbott products that do not have these codes and expirations noted above are not included in the recall. Liquid formula products are not subject to the recall. At this time, Similac PM 60/40 with lot code 27032K80 (can) / 27032K800 (case) are the only type and lots of this specialty formula being recalled.

“The FDA recommends consumers look at the lot code, a multi-digit number on the bottom of a container of Similac, Alimentum, and EleCare powdered infant formula and do not use if the first two digits of the code are 22 through 37; the code on the container contains K8, SH or Z2; and the expiration date is 4-1-2022 (APR 2022) or later. Abbott Nutrition has also recalled Similac PM 60/40 with a lot code of 27032K80 for a can and 27032K800 for a case,” an FDA statement read.