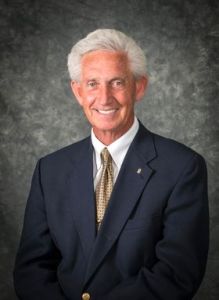 Opp native Lowell Smith will be inducted into the Opp Hall of Fame on Thursday, June 23.

Smith, a lifelong resident of Opp, was born to Lloyd and Mavis Smith on Dec. 18, 1951 in Opp. He and his twin brother, Joel, had an older sister, Margaret Smith Green. Lowell graduated from Opp High School in 1970 and Troy State University in 1974, receiving a Bachelor of Science degree in Business. Smith and his wife Debbie Kilcrease Smith have one son, Jamison Wesley Smith.

Smith worked for Anderson’s Peanuts, a Division of Alabama Farmers Cooperative, where he progressed from being Traffic Manager to Director of Production and Logistics. He was a highly-respected member of the Southern Peanut Association. In 1987, he served as vice-chairman on the Trading Rules Committee, the committee responsible for rewriting the domestic and export trading rules for the association and these guidelines continue to serve as the standard by which peanuts are sold today. He worked for 34 years at Anderson’s until AFC sold the peanut division to Birdsong Peanut Company. Smith then transitioned to the position of purchasing agent at H. T. Hackney for one year before returning to peanuts. In 2010, Lowell began working at Sessions Company in Enterprise, serving as the Food Safety and Quality Manager with a SQF Practitioner Certification from FSMI and GFSI. While in this position, he developed, implemented, and administered the SQF program at the processing plant, until his retirement in 2020.

Smith has always possessed exemplary core values and a strong work ethic, both instilled in him by his parents, he said.

“These core values and his strong work ethic, when combined with his genuine love for Opp, were the catalyst for Smith choosing to play an active role in bettering his community and making it a quality place for families to reside. He has worked tirelessly over the years, often times behind the scenes, to promote and improve our community,” according to the Opp Chamber of Commerce.

Smith became a member of the Opp Lions Club in 1975 and faithfully served the club for 37 years, presiding as president between 1980 and 1981 and District 34N zone chairman and deputy district governor for five terms.

“By far, the award Lowell cherishes most, although this award is not tangible, is the ‘award’ he received when he worked diligently to ensure a young student received the necessary surgery to save his vision. Because of Lowell’s valiant efforts, the student’s vision was successfully restored. The young man later became a U.S. Marine, and he continues to proudly serve his country today,” read a chamber statement.

Smith’s interest in education and children prompted him to become a presenter at South Highlands Elementary School’s “Heritage Day.” For many years, he provided the students with interesting facts related to peanuts and explained the positive impact peanuts have on Opp, the state, and the country. Lowell was one of the most popular presenters and became known all over town by the students as “Candy Man” or “Mr. Peanut” because of the Reese’s Cups and peanuts that were passed out during his presentations.

His interest in education and children was not limited to the elementary school. He served on Opp City Schools’ Federal Advisory Committee from 2000 until 2007 and Opp High School’s Vocational AG Committee from 2003 until 2007. Between 2002 and 2004, Lowell served as Opp Little League president for two years and then as the assistant to the president during the third year. During this time, his goal was to transition the program from focusing strictly on wins and losses to adding an element of mentorship so the kids could engage in sports, but also develop good character skills. In his effort to make the program truly “child-focused,” Smith redeveloped the corporate sponsorship and started a monthly newspaper, along with a league dictionary. Smith did not have a child participating in the Little League Program; yet, he chose to utilize his organizational skills to help improve the overall operations of the program.

Smith has served on the Opp Chamber of Commerce as a member, on the board, or as an officer for over 30 years. He was president of the chamber between 1988 and 1989. During this time, the chamber implemented many reorganizational strategies to better serve the city. The chamber was modernized adding a full-time executive director. A contract was negotiated with the mayor and city council for the chamber to become the “marketing arm” and “information center” for Opp, and the Economic Development Committee was formed. Smith served as chairman of this committee and continued to serve as chairman under several chamber presidents. He worked in conjunction with the mayor and city planner to create five-and ten-year plans for retail growth and to bring businesses such as Burger King, Winn-Dixie, Harco Drugs (now Walgreens), Car Quest, Hobo Pantry, Taco Bell, and Holiday Inn Express to Opp.

Now retired, Smith has joined the Frank Jackson’s Trail Masters organization. He is a member of Southside Baptist Church in Opp where he serves as a deacon, a Sunday School director, and a teacher for the Royal Ambassadors, Youth Camp, and Vacation Bible School.

“Smith epitomizes selflessness in all he does. He truly has a servant’s heart and his efforts over many decades have certainly had a direct and positive impact on Opp and Covington County. He is ready to help where and when needed. Smith has instilled the values of loving our city and exuding a willingness to serve and help our community in his son Wes, who won the Spirit of Opportunity Award in 2014,” according to the Opp Chamber of Commerce.

Smith will be inducted into the Opp Hall of Fame during the Opp Hall of Fame Banquet scheduled for Thursday, June 23, beginning at 6:30 p.m., at the First Baptist Church of Opp Fellowship Center. Tickets are $30 per ticket and may be purchased at the Opp Chamber of Commerce office located at 200 S. Main St.