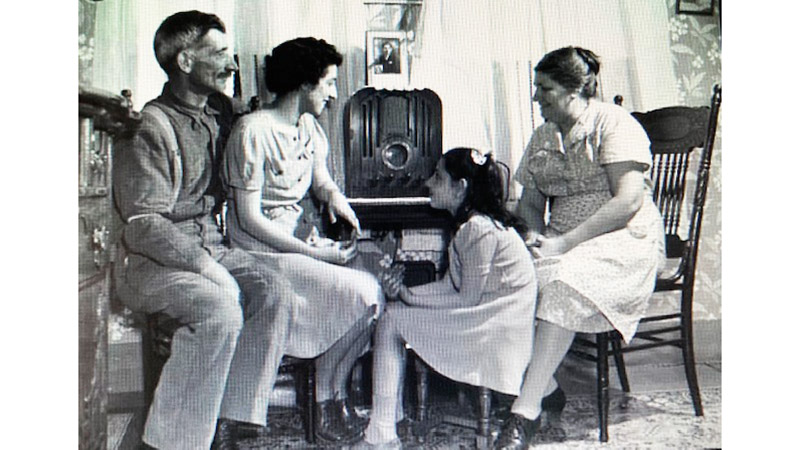 "Turn Your Radio On"

Riding daily in my car along East Three Notch Street, floods of memories swirl through my thoughts. Not only of my growing up years but also of stories told to me by old timers and accounts I have read about do these visions of the past surface.

Do you Remember When East Three Notch Street was a two-lane street? The speed limit has always been 30 MPH at least during my early driving years beginning in the 1960s. In the “horse and buggy days” or the “mule and wagon days,” sometimes the speed limit was exceeded and this ended in crashes written about in the old newspapers.

Do you Remember When children used to walk home from East Three Notch School in the afternoons? A group of kids also walked to First Baptist Church one afternoon a week for children’s choir. The safety patrol would help the boys and girls cross the street. A police officer was always present. John Vick, a former student safety patrol officer, has a good story about that. Many years before that prior to the lunch program being started with the financial help of J. G. Scherf, students walked home at lunch and then returned to school for the afternoon.

Do you Remember When Kwik Chek grocery store used to be located on the corner of Three Notch and Oak Street? Situated a few blocks from downtown, it was the “anchor” store in Andalusia’s first shopping center. Mr. John D. Riley, real estate visionary, developed the business there after he had his two-story Southern Colonial home moved back on the site to make room for the new business block. Riley’s name appears on courthouse records in connection with the creation of several subdivisions and a multitude of other deed transactions.

Do you Remember When the A & P grocery store used to be located where Harold’s Home is in business today? Before that new building was constructed, A & P was adjacent to the Dairy Queen. I can still smell the aroma of that A & P Coffee when I grocery shopped with my mother.

Do you Remember When Woolworth’s and J. C. Penney Co. were located where Powell Furniture and Three Notch Emporium are now situated? The Count Darling automobile dealership was right across the street. Those Chevrolets and Cadillacs used to look really good as they caught the attention of passers-by in that showroom plate glass window!

Do you Remember When Roscoe Worley’s grocery store was near the end of East Three Notch Street? There was always a crowd of admirers that gathered in his store to catch up on all of the local news. He once identified himself to some out of town man that dropped in as Roscoe Scroggins! Do any of you guys remember the story behind that? Grady Lanier and Jimmy Wilson remember.

Do you Remember When that large billboard appeared behind Roscoe’s store facing north which displayed the knock-out picture of our own local but the crowned National Maid of Cotton, Miss Katy Sue Meredith, now Mrs. Ashton Wells? The town was so very proud of her accomplishments at winning that title. It stayed up a long time.

Do you Remember When street paving ended on the Lorraine Curve on East Three Notch Street? Probably not. That was in the early 1920s. Mrs. Nannie Belle Shaver Waits told me about that for she lived on the curve. A little further down the street on the corner of what eventually became Faircloth Street, there was a street sign that read, “ANDALUSIA – 1 Mile.” I am pretty sure that Alfred Perrett told me that. The Perrett farm was right there on the east side of Three Notch. The farm later became residential lots for building homes on Faircloth, Doyle Street, Roselane Drive, and McRainey Loop. That neighborhood became popular when young couples built homes for their growing families right after World War II. All of those unique homes are still admired today.

Do you Remember When Harris’ BBQ was further out on Highway 29 North? At some point in time, there was a go-cart track beside the restaurant. That was the first experience of my girlfriends and I pretending to be race car drivers! Yes, the girls were beginning to “come a long way, baby!”

Do you Remember When Bellwood was a sweet potato farm? Yes, Hazel Shreve herself gave me that information. She even showed me a scrapbook with pictures of the sweet potato garden plot. They sold those sweet potatoes and other vegetables grown in the Bellwood area at Shreve’s Feed & Seed downtown just off Court Square. That business house was razed and converted to a parking lot.

Do you Remember When the land behind Andalusia High School was a big gulley? Someone must have said, “Boys, that would make a perfect athletic stadium.” So in 1950, it became Andalusia Municipal Stadium in the Mayor Tracey Wilder administration. The City Council and the Recreation Board were responsible for seeing the project to completion.

Do you Remember When there was a coal yard on Sanford Road right before one crosses the railroad track heading east?

Many houses, downtown buildings, and the schools burned coal in fireplaces and in furnaces. The coal man would deliver to homes.

Do you Remember When there was a railroad trestle over the Conecuh River at Gantt? When that trestle was built, the Central of Georgia Railroad finally extended their line from Searight into downtown Andalusia thanks to a number of Andalusia businessmen who pushed for that to happen. That was way before there was ever a chamber of commerce – late 1890s.

Do you Remember When there was not a bypass around Andalusia? Back then, young people, all of the businesses were located in downtown Andalusia. Citizens could get haircuts downtown, buy a Sunday suit, a dress, or a pair of overalls, buy a fresh-baked loaf of bread, shop for trinkets at several ten-cent stores, buy horse feed and fertilizer, shop for hardware, get a needed shoe or boot repair, get fitted for eyeglasses, get a butcher’s cut of choice meat or a sack of flour, purchase a brown sack of ice, buy a weekly newspaper, test drive a Ford or Chevrolet pick-up, or enjoy a picture show – all downtown.

Do you Remember When downtown Andalusia businesses were closed on Thursday afternoons but were open until noon on Saturdays? That gave people out in the country an opportunity to come to town and handle necessary business at the courthouse and shop at other stores. The post office is the only place closed now on Thursday afternoons, and yes, they are open until noon on Saturdays.

Do you Remember When trains transported passengers from the Central of Georgia and the L & N Depots? It’s been a while. My uncle rode the train over to Columbus, Georgia to visit his aunts when he was a young boy. He held his head out of the window most of the way, and when he arrived, he was covered in ashes and soot! Those were the days!

Do you Remember When you could order a beautiful fireplace mantel made in Andalusia? Right down there on Tisdale Street that was called Central Street back then, Andalusia Manufacturing Company created mantels, doors, moldings, cabinets that are still a part of many historic homes in neighborhoods today especially on the main streets.

Do you Remember When an area on Montgomery Street looking westward toward South Cotton Street was called “Pleasant Hill?” Edy Bell Taylor told me first about that. That will be part of the new Heritage Park about to be underway.

Do you Remember When there was a little dirt street that was off Montgomery Street to the south. There were several tenant houses on that side street where people used to have fiddling and picking and singing every Sunday afternoon after lunch. I often looked forward to that music when I was a child, because we would go in my grandmothers’ back yard, lie down in the bushes, and just listen. It was like the radio broadcast we listened to the night before on the “Grand Ole Opry” and we loved it. I don’t know who lived there at the time but wish I did!

Reminds me of the old radio collection on display at the Three Notch Museum. Speller Moates of Moates Garage on South Three Notch donated his entire collection before he passed away. Children today don’t even Remember When people used to sit in their living rooms after supper each night and listen to the radio. That was way before the television was invented. News, sports, weather was important information especially during the war years. Reminds me of that old gospel song, “Turn Your Radio On.”

That’s all of the memories for today, readers. Thanks for reading. We can’t bring back the old days, but we can Remember When and smile.