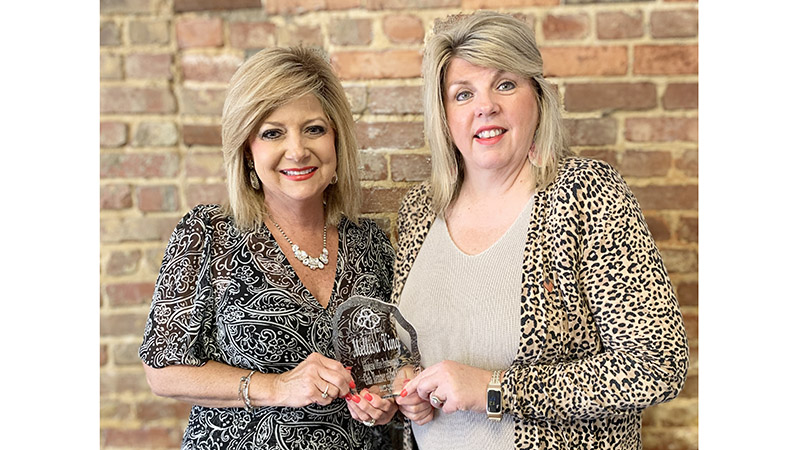 Mellisa King was selected as the Andalusia Office Professionals Club Member of the Year for 2022 at a meeting held Thursday, June 2.

“I am very honored. I love my club and community. I enjoy working with all my club members. It’s such a blessing to be a part of such a wonderful organization,” King said.

Her fellow AOPA members nominated her for this recognition.

“Mellisa always goes the extra mile to participate in all club activities, is always willing to help in any area needed, is very active in our community, encouraging to other club members, and is always greeting other members with a warm welcome,” AOPA President Camaro King said.

Fellow club members who nominated King stated that she is a positive influence, compassionate, and dedicated to serving others. “We are thankful to have Mellisa as a part of AOPA, and it is a blessing to serve alongside her.”

The Andalusia Secretaries Association came into being as a result of two secretaries, Myrtle Kervin and Lenora Campbell, who decided secretaries in this area should get together during National Secretaries Week in April of 1978. A luncheon was planned and attended by 37 secretaries. A committee was elected to make plans for 1979 at the luncheon.

The committee worked with Barbara Linder and Ann Mallory of the Lurleen B. Wallace State Junior College business department and planned a seminar and luncheon for secretaries in April of 1979.

Secretaries were invited to send in a résumé for the purpose of selecting a Secretary of the Year. The entry forms were mailed to the Andalusia Area Chamber of Commerce, and Mrs. Linder of LBW made arrangements for a panel of out-of-town businessmen to select the winner. Entries were judged on the secretary’s education, experience, and community involvement.

The Andalusia Secretaries Association was formally organized on April 18, 1979, with 54 ladies in attendance at the luncheon. The purpose of the ASA was to organize secretaries of the businesses and offices of the City of Andalusia and Covington County in order to cultivate friendly relationships, promote mutual understanding, and to encourage higher standards and continued education in this professional field.

Officers elected to serve for the 1979-80 year were Myrtle Kervin, President; Lenora Campbell, Vice President; Ruth Rabren, Treasurer; and Edwyna Fletcher, Secretary. The 1979 Secretary of the Year award was presented to Edwyna Fletcher, secretary to the General Manager of Alabama Electric Cooperative. Walker Business Machines of Andalusia donated the engraved plaque given to Mrs. Fletcher.

Officers of the Association met quarterly during that year, and bylaws were compiled for presentation to the members at the annual meeting of the Andalusia Secretaries Association on April 23, 1980.

Monthly meetings are held on the first Thursday of each month at Tabby D’s at noon. Annual membership dues are $20 and to be paid by the first of June. The AOPA holds its annual banquet in April and bosses luncheon in October.