A GoFundMe page has been established for Andalusia native Jonathan Douglas, who is seeking help from the public to help raise funds for a barostim implant. 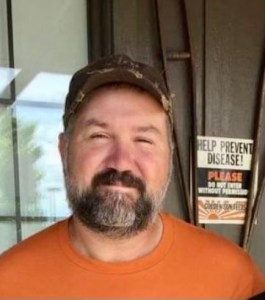 Andalusia native Jonathan Douglas is in need of a life-saving surgery. A GoFundMe page has been set up for donations. It can be found at GoFundMe by searching “Jonathan Douglas.” (SUBMITTED PHOTO)

“Jonathan has been a fighter for the last 22 years. He has faced leukemia, heart attacks, and many other health issues. As his mother, I have watched him win battle after battle. Now, he needs as many warriors backing him for strength and support as quickly as possible,” said his mother, June Simpson.

Douglas, 49, has been denied eight times by his insurance company for a life-saving implant. He had two brain surgeries for Pseudotumor cerebri in 1999 and 2000. He was diagnosed with chronic myelogenous leukemia and had a bone marrow transplant in July 2000. As a result, he spent 19 months in the hospital at UAB with complications.

“I am thankful for the treatment, but the chemo and radiation did a lot of damage to my other organs. It’s sad that the treatment is almost as bad as the disease itself. I had my first heart attack in August 2014 and a second in May 2018. I currently have eight stints and a pacemaker/defibrillator. In October 2021 my ejection fraction (EF) fell to 30 percent, which has been really hard on me because even as close as early 2021, I was walking 5 to 7 miles a day. Now, it’s hard for me to walk to my mailbox,” Douglas said.

With his EF at 30 percent, it qualified him for a new heart failure treatment. The barostim device implant was developed around 2013 and received full FDA approval in 2019.

“My doctor said I needed it as soon as possible. However, from October to December of 2021, there was an incline in COVID cases, and they couldn’t get me scheduled until mid-December 2021. I was excited that I was finally going to get some relief. A week before my procedure, I received my first denial letter from Anthem Blue Cross Blue Shields. Our insurance company had denied coverage for the implant.”

Douglas said his doctor appealed the decision six times, and each time, Anthem BCBS gave him criteria to meet to qualify for the procedure.

According to Douglas, the goal line was moved every time it was reached.

“After six denials and appeals, my local doctor gave up and referred me to Dr. Jay Miller at Emory Midtown because he said I really needed this procedure, and if anyone could get it approved, it would be Emory. I met with Dr. Miller on April 21 and he tested my Ejection Fraction and it was at 10 to 15 percent. He said I needed the procedure as well and needed it fast. I told him of my history of being denied by Anthem BCBS six times, and he assured me there should not be an issue.”

Douglas’ procedure was scheduled for May 6, but he received a denial letter from Anthem BCBS on May 5.

He had an appointment with his cardiologist, Dr. Chenreddy with Atlanta Heart Associates.

“The doctor said we would be right back in the same place with more blockages in eight to 10 months if not sooner. A healthy heart with average EF would have enough pumping power to keep things flowing smoothly, but with a dangerously low EF, my heart doesn’t pump hard enough and blockages form.”

The device sends electrical pulses to baroreceptors located in the wall of the carotid artery. Baroreceptors trigger the body’s main cardiovascular reflex called the baroreflex, which in turn triggers an autonomic response to the heart.

The therapy is designed to restore balance to the autonomic nervous system and reduce the symptoms of heart failure.

“I want to thank everyone for their support and God bless. Please pray with me that eventually this will reach the right persons and I can get this procedure. Now, I need to raise funds to pay for the barostim implant along with many other medical bills I’ve acquired in the tiresome fight for life. Any donation will be greatly appreciated,” Douglas said.