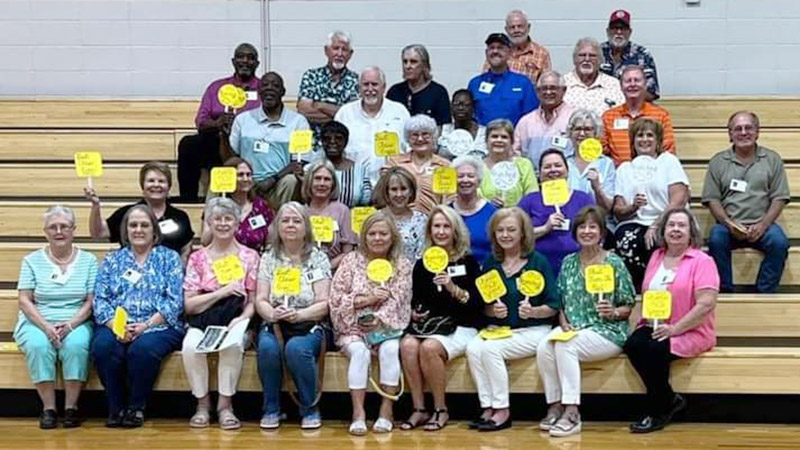 (Editor’s Note: This article was submitted to the Andalusia Star-News courtesy of the Red Level Class of 1972.)

The Red Level High School’s Class of 1972 celebrated its 50-year reunion on Saturday, June 11, in the school’s cafeteria.

The last time the class gathered was in 1992, but many were absent. At that time, three of the classmates had died. Libby Lanham, junior year, Larry Kervin in 1982 and David Green in 1983. One of the class’s senior sponsors (teachers), Mrs. Mary Lois Bailey, also died in 1981.

Many members of the class moved away after graduation either to attend college or to seek their fortune out in the world. Many returned and were all a lot smarter than when they left!

Since the price of gas and lodging is at an all time high, the organizing committee chose to go with finger food to alleviate the cost to those attending. Donations were accepted instead of an admittance fee.

Garry King, vice president of the class, was the emcee for this special gathering. Jimmy Patterson was asked to open the day’s activities with prayer. On behalf of the Class of ‘72, Garry King and Debby Hutcheson Gilliam honored the teachers, Coach Jimmy Prestwood, Mrs. Norma Jackson and Mrs. Nan Pike. (The ladies were unable to attend due to their health).

Irma Pittman Leach entertained the group with a comical rendition of Patsy Cline’s “She’s Got You,” and presented Garry King with an Appreciation Award on behalf of his classmates. Ronnie Smith provided the class with videos of “Then and Now” pictures that ran throughout the day. Pat Cooper Harbuck offered a beautiful toast (of white grape juice) to the Class of 1972 for their 50 year gathering. Ronnie Smith asked for God’s blessing on the food and on each one of us there.

The attendees feasted on sub-type sandwiches, meat, cheese and vegetable trays with a variety of dips, crackers, chips, meatballs, seasoned pretzels, cheese straws, brownies with and without nuts, pound cake, corn flake candy, assortment of homemade cookies, and an assortment of candies that was popular during our childhood (researched and provided by Debby Hutcheson Gilliam). Jimmy Patterson provided a sheet cake with pictures of the original Red Level School, before it burned in 1977, and a picture of the addition added in 1968. Coffee, tea, cold bottled water and punch were also served. Food and punch were served from Jimmy Patterson’s collection of Fostoria serving trays and punch bowl.

Following the socializing and food the classmates adjourned outside for the Memorial Balloon release organized by Sherry Morris Holloway and Larecia Walker Fowler. From there the group went into the gymnasium for the class picture and the former cheerleaders Sherry Morris Holloway, Kathryn Walker Sharpe, Larecia Walker Fowler, Alice Bullock Battle and Barbara Townsend Johnson led the group one more time in “Two Bits!” Judy Cooper Klipp brought commemorative ink pens inscribed Class of 1972 for every classmate.

The Level graduates were able to once more walk the halls of Red Level High School thanks to Principal Randy McGlaun.

The group is still Red Level’s largest graduating class with 60 receiving diplomas on May 26, 1972. Of those 60, 48 are remaining and of those, 28 were in attendance. Many were invited and several came that were with the class in high school but for whatever reason did not graduate with the group.

The class plans to return in two to three years and will begin making preparations soon. Those who would like to be part of the future reunion committee should contact Sherry Morris Hollway, Irma Pittman Leach or Garry King.