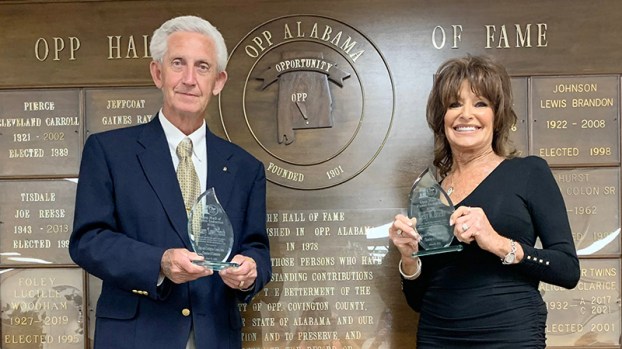 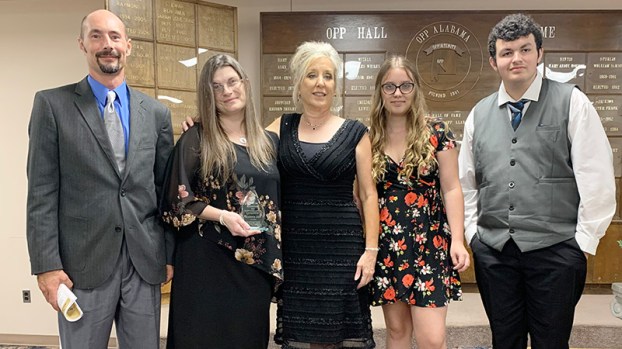 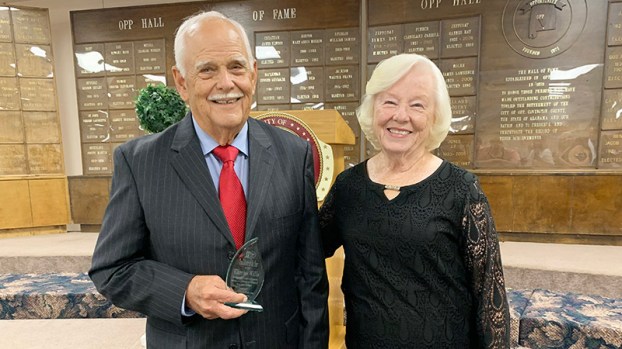 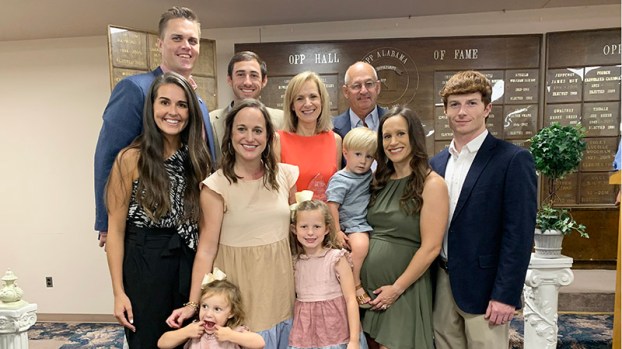 Melinda Hall, center, was chosen as the Spirit of Opportunity. She is pictured with her family. (PHOTO BY ZACK MAIO) 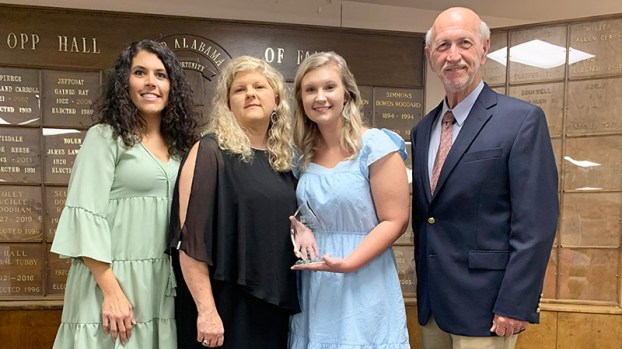 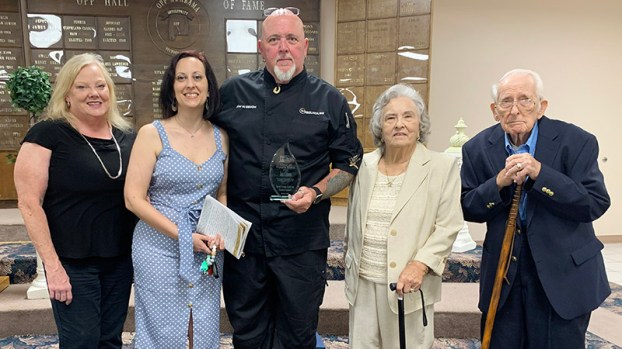 Wheelhouse Executive Chef Jon Gibson, middle, was named the “One of Opp’s Own” recipient and is pictured with Kathy Cotton, Christie Blocker, and his parents, Mabel and Rodney Gibson. (PHOTO BY ZACK MAIO) 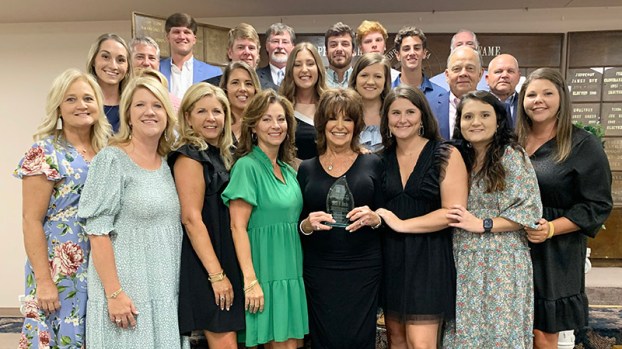 Opp Mayor Becky Bracke, center, was inducted into the Opp Hall of Fame. She is pictured with members of her family. (PHOTO BY ZACK MAIO) 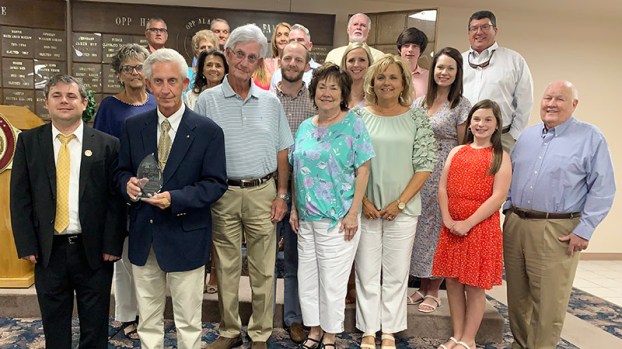 Lowell Smith, second from left, was inducted into the Opp Hall of Fame. He is pictured with members of his family. (PHOTO BY ZACK MAIO)

The Opp and Covington County Area Chamber of Commerce recognized six individuals and a local business with awards at its annual Investors and Hall of Fame Banquet on Thursday, June 23.

The event took place at the First Baptist Church of Opp’s Fellowship Center.

“The businesses in Opp have been very anxious to get out of the COVID restrictions and have come out of them on fire. The Chamber has been very busy trying to get things going again. There have been a lot of grand openings, and we have welcomed businesses to Opp. That says a lot about the Chamber and the City of Opp that we have a welcoming community for businesses,” said Opp Chamber President Jay Mikel.

“The CEO of Mizell Memorial Hospital (Kerry Goff) gave me the idea to call for corporate sponsors, and you all answered. We are so thankful you filled these tables,” Brandin said.

“It takes all of us to have a successful event, and I’m so thankful and grateful for our corporate sponsors as well as each of you who chose to be here.”

City of Opp Mayor Rebecca “Becky” Woodham Bracke and Larry “Lowell” Smith were inducted into the city’s Hall of Fame. Hall of Fame recipients were first awarded in 1978 to nine individuals.

“Anything I’ve accomplished in my life, I owe to two people: my parents, Luther and Lois Woodham. They raised us to respect other people and taught us nothing is free in life. You work hard for whatever you get. They taught us a great work ethic and did it by example. Thank you very much for this recognition,” Bracke said.

“Opp is always home. The good Lord led and guided me to come back to Opp. It was an honor being with you tonight. I appreciate this award very much and thank you all,” Lowell said.

Dr. Jason Cain was the Director of Student Services at LBW’s MacArthur campus. He also served as a director and past president of the Opp and Covington County Area Chamber of Commerce Board of Directors. Cain passed away on April 18, 2020. The Chamber established this award to pay tribute to him and recognize an individual who makes a difference in the lives of many. The 2022 recipient is Kimberly Liles.

“I hope to live up to the standards that Dr. Jason Cain emulated in this community every day. I thank my LBW professors and administration for nominating me for this award and the Opp Chamber of Commerce for awarding me. I am honored,” Liles said.

Trail Master of the Year Award

“The Trail Masters have been an organization for more than 20 years, and we have done a lot to enhance the lake, which is a part of Opp. It is a great place to live here. There are only about two or three things I value more than my citizenship in Opp. One of them is my wife, Noreta, of almost 66 years. The other thing I value is the love and grace of our Creator,” Willis said.

This award is presented to a person, group, or organization that is an “ambassador” for Opp, a “shining star” for the city. This person, group, or organization is actively involved in the community through community service, exhibits a sincere love and respect for the City of Opp, and extols the City. The award has been presented annually since 2008 except for 2020. The 2022 recipient is Melinda Hall.

Hall is a lifelong resident of Opp, who graduated from Opp High School in 1980. She has been involved in PTO at South Highlands (now Opp Elementary) and Opp Middle School. She is a member and former officer of the Bobcat Booster Club and has served several terms on the Opp and Covington County Area Chamber of Commerce Board of Directors. She was the president during the 2018-2019 term. She is currently a member of the Mizell Memorial Hospital Board and Foundation Board, where she has served as chairperson for the past eight years. She also serves on the Opp High School Business Education Advisory Committee, the LBWCC Foundation Board, and is on the steering committee for the Covington County Program of Leadership.

“I am so humbled to even be considered much less chosen for this award. When I look at the list of people that have been chosen for the Spirit of Opportunity in years past, it’s an impressive list of great people who have a tremendous love for our town. I’m so deeply honored to now be on that list,” Hall said.

Business of the Year Award

This award is presented to a business that through its actions has provided service to the community, had a positive economic impact on the City of Opp, and has been actively involved with the Chamber. It was first awarded in 2012, and the 2022 recipient is Young’s Florist and Gifts.

Young’s Florist has been in business in Opp for over 60 years. It was first opened by Sarah Smith Young and Rebecca Young Edgar and has called Covington Avenue in Opp its home since 1989. Virgil Sasser, Lori Sasser, Laura Hawthorne, and Sheila Dye purchased the business in November 2017 and elected to maintain the business name because it had been so recognizable and iconic to citizens of the community. The Opp Chamber for the 2021 Alabama Retailer of the Year, which also included a Customer’s Choice award, nominated Young’s Florist.

“We would like to thank the Chamber for this award. We are very humbled and thankful. This is an honor for us. Every business in Opp is important and deserving, and it’s important to buy local and support those businesses. These ladies are Young’s Florist now, and we thank you all for this award. May God bless each business here and may God bless Opp, Alabama,” Sasser said.

One of Opp’s Own Award

Since 1994, this award has been presented to a person with deep roots in Opp and has made Opp proud through his or her success. The honored individual each year serves as the keynote speaker at the Chamber’s annual banquet. The 2022 recipient is Wheelhouse Restaurant Executive Chef Jon Gibson.

“I would like to say thanks to the Opp Chamber for this award. I am definitely honored and really floored to get this. I grew up learning how to cook from my mother and grandmother, but I never imagined I would one day be the executive chef at a restaurant in my hometown. Thank you once again for your support, kindness, loyalty, generosity, and the family of Opp, Alabama,” Gibson said.