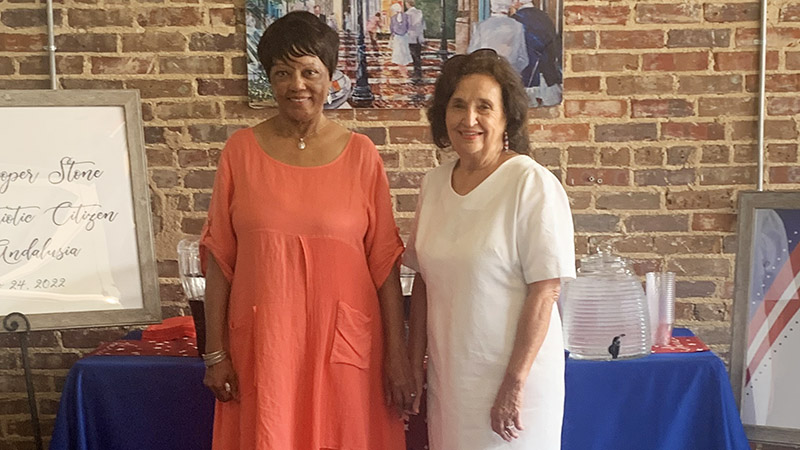 Jean Cooper Stone, left, and Alice Boles Childree were recognized Friday, June 24, at the Bluebird Coffee Shop. Both were named Andalusia’s Most Patriotic Citizens for 2022 and will serve as Grand Marshals in the DAR’s annual Fourth of July Parade in Andalusia this year. (PHOTO BY ZACK MAIO)

The Daughters of the American Revolution Old Three Notch Chapter is gearing up for next week’s Fourth of July holiday and introduced the Grand Marshals for this year’s parade.

The parade will take place Monday, July 4, beginning at 10 a.m., and the route will be from the First Baptist Church to Pirate Graphics.

“This year, we have added a fire baton thrower and the Lower Alabama Kickers line dancers. We will also have many other floats and participants. Everyone is welcome to come join us or watch the parade. We will be throwing beach balls, beads, and candy. We are happy to announce our Grand Marshals are Alice Boles Childree and Jean Cooper Stone,” Brenda Gouge said.

Childree and Stone, who were two of the many Proud Patriots named by the DAR, were honored with a reception at The Bluebird Coffee Shop on Friday, June 24. They were also named Andalusia’s two most patriotic citizens this year.

“I’m grateful to be named a Proud Patriot this year and want to thank everybody. I’m proud to be an American citizen because it’s the most wonderful place in the world. It was such a blessing to be born here. Freedom is not free, and it is an honor to everyone who has helped us to be free,” Childree said.

“It’s an honor to be named a Proud Patriot and recognized. When I think about the feelings of being an American citizen, it almost makes me cry. I’m very proud to be an American citizen. To me, freedom means we don’t have to worry about being persecuted when we gather for worship. To be able to vote for people of our choice, that’s freedom. Freedom is also about being able to walk into any establishment because years ago, my people weren’t even allowed to do that,” Stone said.

Childree is excited to represent Andalusia as the Grand Marshals at this year’s parade. “I’ve certainly never done anything like this before, so I just want to do my best. It will be such an honor. We were certainly surprised when we found out. We do the things we want to and are thankful to be able to do the things we do.”

Stone felt the same way and was also surprised by the recognition. “When Alice told me we were being rewarded for what we were doing, I remember thinking, ‘Really? Why should we be rewarded for something we love doing and making an impact?’ I’m usually in the background and not out front, but I like the accolades. It is pretty sweet and special. It’s a surreal feeling to be a grand marshal this year.”

“Each year, the Daughters of the American Revolution present the Women in American History Award to a woman who is making a difference in her community and serves as an example through her contributions to the community. We are honored to have two women who fill that role this year in our Grand Marshals Mrs. Childree and Mrs. Stone,” Gouge added.

For more information contact the Old Three Notch DAR at 334-222-0347 or e-mail Brenda Gouge at bgouge@centurylink.net.

“We love Andalusia and being American citizens,” Childree said. “With Lee Greenwood coming in July, we are excited, and he said it best: God bless the USA,” Stone added.