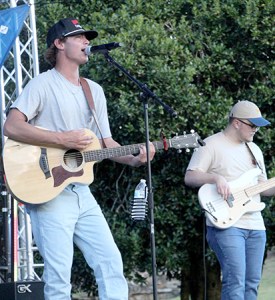 Mitchell Hudson and Clay Legg of the Mitchell Hudson Band perform to the crowd gathered at Springdale Estate Thursday night for the first concert of July Jamz. Other members of the band are Richard Sims and Brent Morgan. The concert series will continue each Thursday night in July. (PHOTO BY ROBERT BLANKENSHIP)

The music celebration will continue each Thursday in July on the grounds of Springdale Estate. On July 14, 55 South Bound will perform with opening act Muddy Waters; July 21 will feature The 2-2-5 Uptown Band with opening act Minus One. The event concludes with a special performance by country music star Lee Greenwood with opening act, The Three Notch Ramblers, which also corresponds with the presentation of the Vietnam Memorial Traveling Wall on the grounds of Veterans Park behind the Andalusia City Hall. There will also be a fireworks display every evening. All concerts are free to the public.

Greenwood’s performance on July 28 is sponsored by CCB Bank as part of its 75th anniversary. The City of Andalusia and the Covington Veterans Foundation are sponsoring the Vietnam Memorial Traveling Wall.

Gates open every Thursday at 5:30 p.m. with concerts scheduled to begin at 6 p.m.