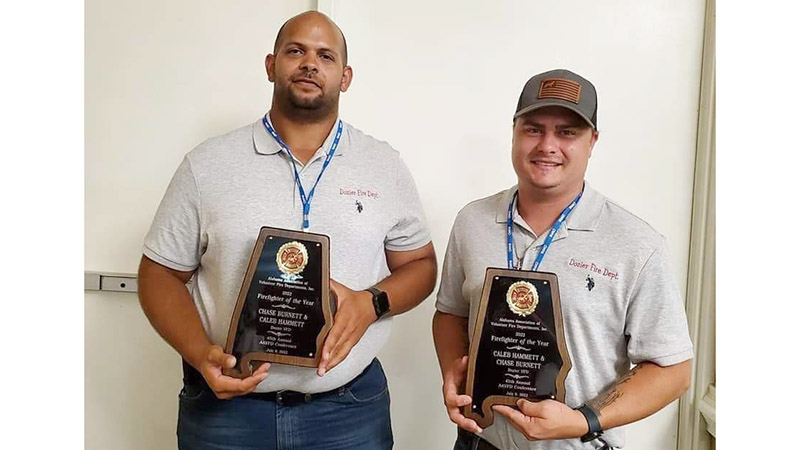 Chase Burnette, left, and Caleb Hammett were selected as the 2022 Firefighter of the Year by the Alabama Association of Volunteer Fire Departments on Saturday, July 9. (SUBMITTED PHOTO)

Chase Burnette and Caleb Hammett of Dozier were named Firefighter of the Year at the Alabama Association of Volunteer Fire Departments’ 45th annual conference Saturday, July 9, in Sheffield, Alabama.

They were chosen for the award after an incident where they rescued three young girls swept into the Conecuh River by the current on June 23, 2021. Crenshaw County Sheriff Terry Mears, Burnette, and Hammett were on the scene near the bridge located on County Road 77 in Dozier at 6:41 p.m. Burnette and Hammett made their way down the bank close to the girls. The firemen used a rescue device called a ResQ Disc, which resembles a Frisbee with a 150-foot rope attached. The men pulled the girls to safety on shore one at a time.

“I received a message from our secretary and treasurer, Ellen Joyner, saying she needed a copy of the report from the incident. A few days later, I got word she wanted to have a word with Firefighter Caleb Hammett and myself. She told us someone with the Alabama Association of Volunteer Fire Departments recently stumbled upon a newspaper article about us saving three girls that had been pulled downriver by swift currents, and we had both been nominated for Firefighter of the Year. Our fire department has never been recognized for an outstanding achievement, and being able to be a part of making that happen has been an exciting but humbling experience,” Burnette said.

Burnette and Hammett take pride in serving their community as volunteer firemen. “The support of our community makes it worth it. I believe I speak for every first responder across the nation when I say that we are honored to be the ones our community calls on for help,” Burnette said. “I am able to help people in their time of need and help the community that I live in,” Hammett added.

Both men were grateful to rescue the three girls from the river.

“I’m proud to know our actions that day helped those three girls return home with their families,” Hammett said. “Relief would probably be the best word to describe it. There is a lot of stress involved when you’re called to assist someone in immediate danger. You have to remain calm and not only stay focused on the task at hand, but the people are also depending on you to get them out of trouble and will feed off of your energy. There is already enough tension in situations like that, and you can’t effectively execute a plan if you’re contributing to the stress,” Burnette stated.

In addition to volunteering their time responding to calls, Burnette and Hammett also volunteer when interacting with the community.

“We are excited about our 35th Annual Crenshaw County Rodeo. It is organized by the Crenshaw County Association of Volunteer Fire Departments and sponsored by a lot of outstanding businesses and public figures in the area. We all enjoy coming together with the citizens we serve to meet and have a great time,” they said.

The rodeo is a weekend-long event and will be held Friday, August 5, and Saturday, August 6, at the Tom Harbin Ag Center on Airport Road in Luverne.

The Dozier Volunteer Fire Department is located at 48 Tyner Road.