FOAA to serve as aerial escort of Vietnam Traveling Wall 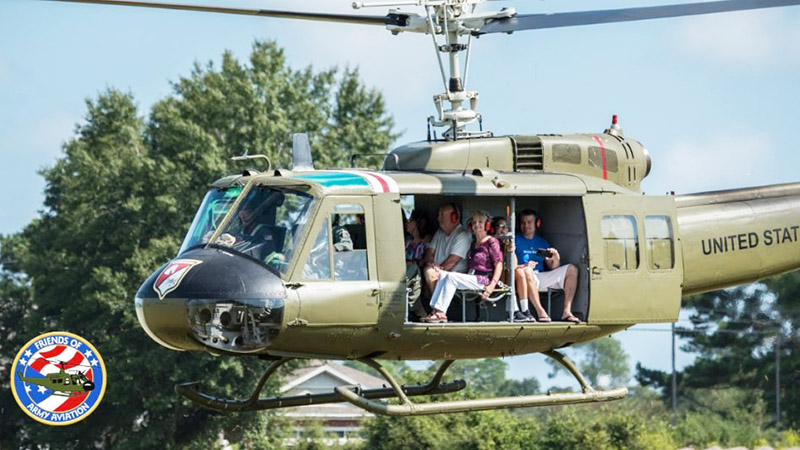 The Friends of Army Aviation will offer eight to 10 minute rides in its UH-1H “Huey” helicopter for $70 per rider on Friday, July 29, and Saturday, July 30. (SUBMITTED PHOTO)

The Friends of Army Aviation from Ozark will be the aerial escort of the Vietnam War Memorial Traveling Wall and provide a static display of its iconic UH-1H Huey helicopter to the public in Andalusia.

FOAA will escort the Traveling Vietnam Wall to Covington Veterans Monument behind City Hall in Andalusia on Wednesday, July 27. FOAA will also offer eight to 10 minute rides in its UH-1H “Huey” helicopter Friday, July 29, and Saturday, July 30 for $70 per rider.

The Traveling Wall is an exact 3/5-scale replica of the Memorial Wall in Washington standing 6 feet tall at the center and over 300 feet long from end to end. It is in high demand throughout the United States, and the appearance in Covington County will be the only appearance in the entire state of Alabama in 2022. The Traveling Wall be set up in the Veterans Park behind City Hall in Andalusia and will remain open to the public 24 hours a day for five days. An opening ceremony is scheduled on Thursday, July 28, followed by a patriotic music tribute on the grounds of Springdale.

The Friends of Army Aviation is a non-profit public education organization filled under section 501(c) (3) of the IRS. The organization is dedicated to presenting the Army Aviation story to the American people through static displays of legacy Army aircraft and an associated ride program.

The FOAA’s mission is to provide the American public an opportunity to experience the rich heritage of Army Aviation by having an opportunity to participate in aerial flight in those legacy Army aircraft that served in combat flown by Army crews. The FOAA also educates those who are unaware of the importance of Army Aviation and the role it played in armed conflicts and providing the troops with the support needed to achieve their mission and to ensure their survival on the battlefield.

The Friends of Army Aviation has five primary purposes:

• Educate the American public to the contributions Army Aviation has provided to the battlefield.

• Support the families and friends of soldiers who have given the ultimate in support of freedom around the world.

• To inspire young people to consider aviation as a career and to honor those soldiers serving past and present.

• To maintain, restore and preserve authentic legacy Army aircraft used in combat operations and enable the general public the opportunity to ride in and experience the same sights and sounds as those of a combat veteran.

• Support Fort Rucker, The Home of Army Aviation, and the local Wiregrass communities with an outreach program.  Those who desire to demonstrate their patriotism in support of the America servicemen and as a salute to their sacrifice and dedication to duty and country.

The Friends of Army Aviation is located at 189 Heritage Way in Ozark, Alabama. For more information visit www.friendsofarmyaviation.org or call 334-445-0008.