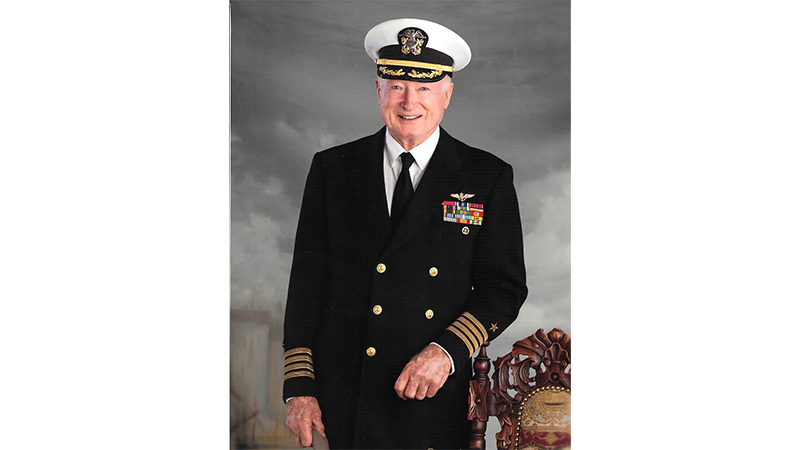 Ralph Rutherford was not only the only son, but also an only child when he was selected by the local draft board for military service in the 1950s.

“All of the local officials’ sons were passed over,” he said.

Rutherford, a 1945 graduate of Pleasant Home School, was well into a career. After attending the University of Alabama for a year, he received an appointment to the Merchant Marine Academy, where he studied for four years. He was commissioned in 1950 and given a job on a Texaco tanker. 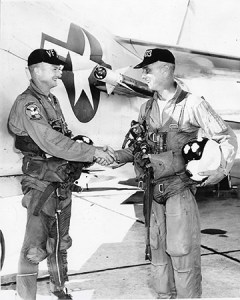 Rutherford earned multiple commendations for his skills as a pilot.

“I served on that long enough to get a vacation,” he recalled.

He was working for a Texas company when he was drafted.

“They tried to get the governor to say the job was vital and I didn’t have to go,” he said. “But my father said, ‘Take the commission with the Navy and run with it.’”

His father, Douglas B. Rutherford, knew a bit about military service. A naturalized citizen of the United States, the elder Rutherford had served in the British Army, as had the uncle for whom Ralph Rutherford was named. That Major Rutherford died in France during World War I.

After the World War, Douglas Rutherford resigned his commission. Through family banking connections in England, he associated with a company known as U.S. Cotton and Lumber Co. out of Mobile and Baldwin County.

Ralph Rutherford’s mother had grown up in Opp and had a sister, Lou, who was living in Mobile, serving as a missionary to the Cajuns. It was through Aunt Lou that his parents met, and they eventually moved back to Covington County. 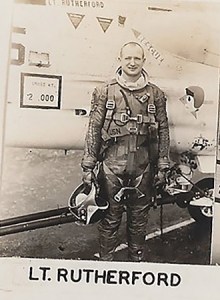 Rutherford, a graduate of Pleasant Home, would rise to the rank of captain during his military career.

So Rutherford took his father’s advice, accepted a Navy commission, and was ordered on board an aircraft carrier.

“I lost an argument with the administrative officer that wanted me to go to flight training. He said ‘Yes.’ I said, ‘No,’” Rutherford recalled. “He sent the papers down to the desk. The captain’s endorsement was, ‘This is an outstanding young naval officer. I don’t know whether he can fly or not.’”

Within a week, Rutherford had orders to flight training and went on to prove that he could, indeed, fly.

In a career that spanned 26 years and in which he attained the rank of captain, he earned numerous commendations for his skills. Perusing his military file is like reading the script for an action movie.

In October of 1961, he was recognized for taking out an unmanned aircraft that was circling in the Norfolk area where he was then stationed. He had just landed when the order came to shoot down the plane, and Rutherford was sent back up to do the job.

The commendation reads, “you manned your aircraft and launched with minimum delay to shoot down the aircraft. You intercepted and hit the abandoned plane with a missile, scoring a direct hit and thus ending the menace to the community. Your skill and efficiency in carrying out this mission reflects great credit.”

In 1961, the Cold War was on and the unmanned plane caused great alarm.

“It turned out, the pilot had been smoking in the cockpit, which he wasn’t supposed to do,” Rutherford said. “He bailed out, and I had to go shoot the plane down.”

Rutherford had been in the Mediterranean during the Cold War, commanding an air wing of the USS Shangri-La, one of 24 Essex-class aircraft carriers completed during or shortly after World War II for the Navy. The Shangri-La’s mission changed, and Rutherford was assigned to a different ship.

“We picked up four attack aircraft squadrons,’ he said. “We went through the Canal to the Pacific and we ended up flying only in the Southern part of Vietnam.”

In April of 1967, he was commended for his role in taking out the Haiphong Ammunition Depot in Xien AN, North Vietnam.

“Commander Rutherford courageously led the flak suppressors through a simultaneous barrage of no less than 15 surface-to-air missiles, an attack by MIG-17 aircraft, plus intense anti-aircraft fire, all in the immediate target area,” his commendation states. “With great courage, he pressed the attack using 20mm cannons and ZUNI rockets against his assigned flak site despite extreme maneuvering required to avoid the closest of the exploding surface-to-air missiles.”

The following month, he was acting as flight leader of four flak suppression aircraft during a coordinated strike on the heavily defended Uong Bi Thermal Power Plant.

“By a display of daring airmanship in the face of determined enemy opposition and in spite of unplanned maneuvering necessitated by navigational difficulties due to weather, he delivered his ordnance with pinpoint accuracy, completely silencing his pre-assigned flak site. The intelligent planning and unerring accuracy of the execution of his mission, the unusual initiative and professional competence which he displayed while exposed to great personal danger were directly responsible for none of our aircraft receiving damage while extensively damaging this important target,” his commendation states.

He earned the Silver Star in lieu of a sixth air medal for the successful completion of four strikes and 12 flights against the enemy in an active combat area in May and June of 1967.

“The carriers I flew off of are museum ships now,” Rutherford said.

He and his fellow naval aviators saw many strange things, he said, that some would call UFOs.

“Most of these Navy pilots have seen them,” he said.

“I saw one which I assume really was one of the planes we don’t talk about,” he said. “I never talked about it with anybody because I would have been accused of drinking too much.”

At one point, he had orders to be the superintendent of the Naval Observatory.

“I had sold the house and was getting ready to move,” he said. “The detailer called me up and said they were going to make it the quarters of the vice president.”

It was fine with Rutherford.

“I didn’t understand why I sent there in the first place,” he said.

Another unusual assignment came when an admiral who had been in charge of the nuclear submarine program was assigned to reorganize the Navy. He interviewed several candidates for his chief of staff, and selected Rutherford.

“It turns out that Admiral Signhorse went over for his annual physical exam and he was immediately retired,” Rutherford said. “Here I am sitting on a fresh caught job, not knowing what’s happening and the boss is no longer there. And so I started asking what do I do as the No. 2.

“No one seemed to know what to do,” he said.

Eventually, the admiral was hired back.

“Signhorse smoked too much and that was the reason he was being retired,” Rutherford said, adding that the admiral’s sister convinced him to use hypnosis as a tool to stop smoking. For him, it worked.

“I told him he wouldn’t get anywhere on reorganizing the Navy,” Rutherford said. “The heads have their own fiefdoms and aren’t about to give them up.

“We met a couple or three times, but nothing formative happened,” Rutherford said. “Finally, he called me down to his office and said, ‘You’re right. We’ve been disbanded.’”

Rutherford attained the rank of captain in 1971, and retired with 26 years service in the Navy. He and his wife, Faith Drumheller, make their home in the edge of Coffee County.

— Michele Gerlach is the communications director for the City of Andalusia and a member of the Covington Veterans Foundation Board.