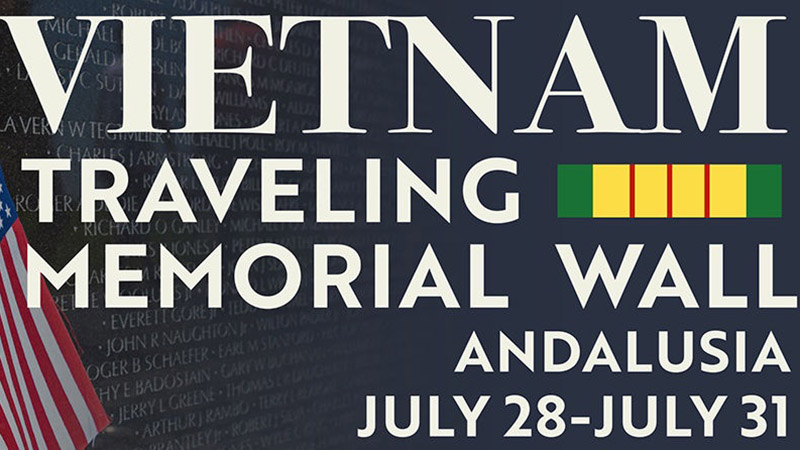 The Vietnam Traveling Memorial Wall will be in Andalusia from Thursday, July 28 through Sunday, July 31.

A big weekend of activity in Andalusia kicks off Thursday with the opening ceremony for the Vietnam Memorial Traveling Wall followed by a free concert featuring country music artist Lee Greenwood at Springdale Estate. 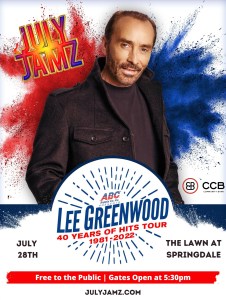 Due to the large number of people expected for the concert, the City of Andalusia will be running CATS buses from 5 p.m. and continuing through the concert and delivering riders back to the square following the event. CATS will pick up riders on the square between Walker’s and the Clark Movie Theater and drop-off will be at city hall where golf carts will be available to those who need assistance. The buses will run continuously through the event.

A ceremony officially opening the Vietnam Traveling Wall will be held at 5:15 p.m. in the Covington Veterans Memorial Park behind City Hall.

The opening ceremony will include recognition of Gold Star families.

The wall will be open to the public 24 hours a day until a closing ceremony scheduled for Sunday at 5 p.m. Prior to that, at 2:30 p.m., Command Sgt. Maj. Jimmie W. Spencer, ret., will speak in the Andalusia City Hall Auditorium as part of a Vietnam War Commemoration.

Volunteers will be present throughout — day and night — to assist the public, including helping to find name locations on the wall.

As part of the Andalusia Area Chamber of Commerce’s July Jamz event, Lee Greenwood will perform Thursday at 7:30 p.m. The gates open at 5:30 p.m. with the opening act, The Three Notch Ramblers, scheduled to perform music from the Vietnam Era.

There will be a fireworks display following the concert at approximately 9 p.m.

Greenwood has seven number one songs and 25 charted singles to his credit, the biggest being his performance of “God Bless the USA.”

Greenwood’s performance is sponsored by CCB Bank as part of its 75th anniversary.

The City of Andalusia and the Covington Veterans Foundation are sponsoring the Vietnam Memorial Traveling Wall.