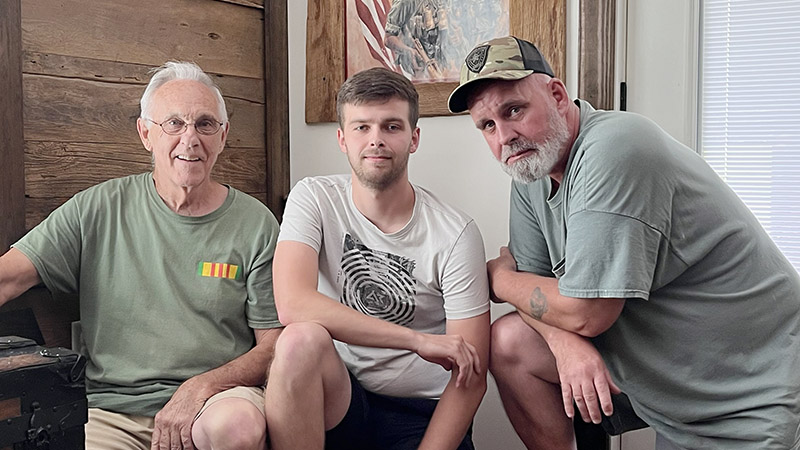 The Covington Veterans Foundation and City of Andalusia will have volunteers helping with security of the Vietnam Traveling Memorial Wall as it stops in Andalusia for four days this week.

“It’s an honor to be able to help with the wall. We’re honored to have it in Andalusia because this will be the only place it will be in Alabama this year and are very fortunate,” Jack said. “I’ve never seen the wall and wanted to go to D.C. and see it, but I’m glad it’s coming, so I can finally get to see it and pay tribute to the men and women who have served,” Jeffrey Sr. said. “It’s an honor to be near the names of those who fought alongside my grandfather,” Jeffrey Jr. said.

All three men take pride in their tenure as veterans. “Serving in the war to me is being of service to my fellow men. It has opened the door to many opportunities for me in my lifetime. I’m a south Alabama share-raising crop farmer, and if I hadn’t gotten out of here, I would have never seen the world. It opened the door for me to explore the world,” Jack said.

“It was a duty required of by me from my government to go serve, so I went and did it to keep the war out of here,” Jeffrey Sr. said. “It was an honor to be underneath these two,” Jeffrey Jr. added.

The word “freedom” carries a large amount of significance to them. “Freedom is something we fight for and some of us longer than others. It doesn’t really matter about the amount of time you fight for, it’s the fact you fought for it so other people could enjoy the freedoms they have,” Jeffrey Sr. said.

“I really didn’t know what to expect and was just trying to get out of here. I was working at the cotton mill in Opp and wanted to get out of here badly. I wanted to go do something else and see what the world is about. I joined the Army and told my family and friends I had been accepted. It was really a non-event for me. They didn’t cry and were happy for me,” Jack said.

The Ammons agreed the Army was the best-suited military branch for their family.

“It was a tradition. I was a 13-year Army brat before going and enjoyed going to the motor pool with my dad having a grand old time and watching him conduct what he conducts. I was like, ‘I want to do this one day. I want to be in charge of something and make a name for myself.’ I decided to follow suit,” Jeffrey Jr. said.

“It was the same tradition, and I wanted to follow in my dad’s footsteps. I took it to a whole new level. People said that was my calling in life,” Jeffrey Sr. said.

“For us, the Army was the best one,” Jack added.

Jack began in the 117th Field Artillery Regiment of the Alabama Army National Guard and went to basic training in Fort Jackson, South Carolina. “My AIT training was also in Fort Jackson. I served two years in Alaska and then went from Alaska to Vietnam.”

Jeffrey Jr. began his military journey in the same place as his grandfather. “My basic training was in Fort Jackson, South Carolina, and then, I went to Virginia. After that, I went to Fort Campbell, Kentucky, and was First Battalion 101st Aviation Regimen. I did one tour to Afghanistan and had a year of rotation when I went to 11 different countries.”

Jeffrey Sr. started with basic training in Fort Dix, New Jersey, and Aberdeen Proving Grounds. “My first duty station was in Germany. I did three years in Germany and then got out of the National Guard. I went back in at Fort Hood and was with the Second Army division. Then, I went to Korea to the First Infantry Division and came back to Fort Hood. I went on recruiting duty and back to Germany with my second ACR and did a 15-month deployment to Iraq. I came back to El Paso and did another year of rotation to Afghanistan before I got out. We were in Desert Storm during my first tour in Germany.”

Jack believes the military could be a good experience for any young person. “It gives them an experience they will never have anywhere else. You meet people from all over the world and from different walks of life. It gives you a good sense of camaraderie, so I would say, ‘Go for it.’”

Jeffrey Jr. added that it means a lot to him that he followed in both his father and grandfather’s footsteps. “To be honest, it gave me the opportunity to be the person I am today. Grandpa was a lineman, and then Dad one-upped his dad and became a mechanic. On top of that, I one-upped my dad and work in aviation on apache helicopters. When I have kids, they’re going to be a doctor or a lawyer. It’s an honor to be able to put on the boots they once wore.”

The men agreed basic training was one of their most memorable experiences.

“That’s something you’ll never forget. You can ask anybody that’s 100 years old, and they won’t forget what basic training was like. It wasn’t a lot for me to take in as a farm boy, but I’ve seen city boys from New Jersey who had never been outside. To me, it was a walk in the park, but for some of these kids, they didn’t know how to get out of the bed and were taught really quickly. Basic training was a lot of fun and learning for me, but it was a cakewalk from where I came from,” Jack said.

“It was a culture shock, and you have no choice but to adjust to it. You are going to adjust, and it is dependent upon you how long it takes. You endure more pain and agony the longer it takes,” Jeffrey Sr. said.

“For me, it was an absolute cakewalk being a 13-year Army brat. They tell you all the time they have to break you, build you, and mold you back to the way they want you. I was already there, and my drill sergeant called me Mr. Army because of how well I was formed thanks to my father,” Jeffrey Jr. added.

Jeffrey Jr. said the Army gives its recruits a strong foundation. “Everything is right in front of you, and if you don’t know, someone else does. In the civilian world, you have to search it up and go find it. Everything is really given to you in the military. They give you a place to live if you’re single and not married. They help you when you need help and guide you in the right directions. If you mess up, then you get corrective action.”

The men will join other community volunteers in providing around-the-clock assistance at the Vietnam Traveling Memorial Wall, which will be at the Veterans Memorial Park in Andalusia from Thursday, July 28, until Sunday, July 31.

Opening ceremonies for the Wall will be held Thursday at 5:15 p.m. with Gold Star families being recognized during this ceremony.

The Wall will be staffed by volunteers 24/7 until closing ceremonies Sunday at 5 p.m.