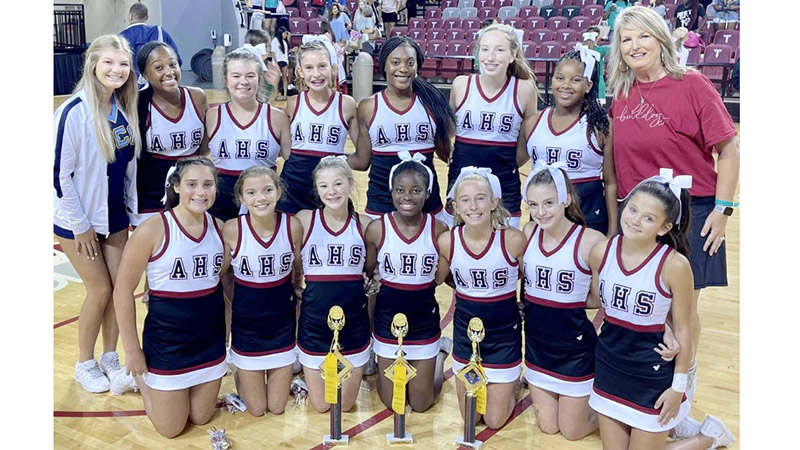 Each day they were evaluated on something they learned that day and received superior ribbons. They also received the spirit stick each day while at camp and on Friday brought home the TOP BANANA. The Top Banana is awarded to the teams at camp that demonstrate qualities of leadership, spirit, and the overall ability to work hard while still having a blast!

Six of the girls also made UCA All- American Cheerleader. Each girl had to perform a jump, cheer, and dance for the UCA staff to judge.

Four of the girls received the Pin It Forward Award. Keaton Spears was pinned by a UCA staff member and Reagan Curry, Marley Mullins, and Addison Brown were pinned by a fellow cheerleader.

Pin it forward is one of the special duties of a staffer to recognize a camper for a quality that has made them stand out. The unique moment of pinning it forward is that the staff can personally award at any time throughout the camp and for any reason. Some qualities which we strive to seek out include: stepping up to be a leader by setting a good example for their peers, including members of other teams.

“I am so excited and beyond proud of the growth of the AHS JV Cheer program over the course of the three years,” said head coach Yvette Akridge said. “It has been an honor to be able to lead these student-athletes, both on and off the field. We are coming off an amazing performance at UCA Camp and we can’t wait to get back on the field to cheer on our Bulldogs. Here’s to another amazing year, Go Bulldogs!”